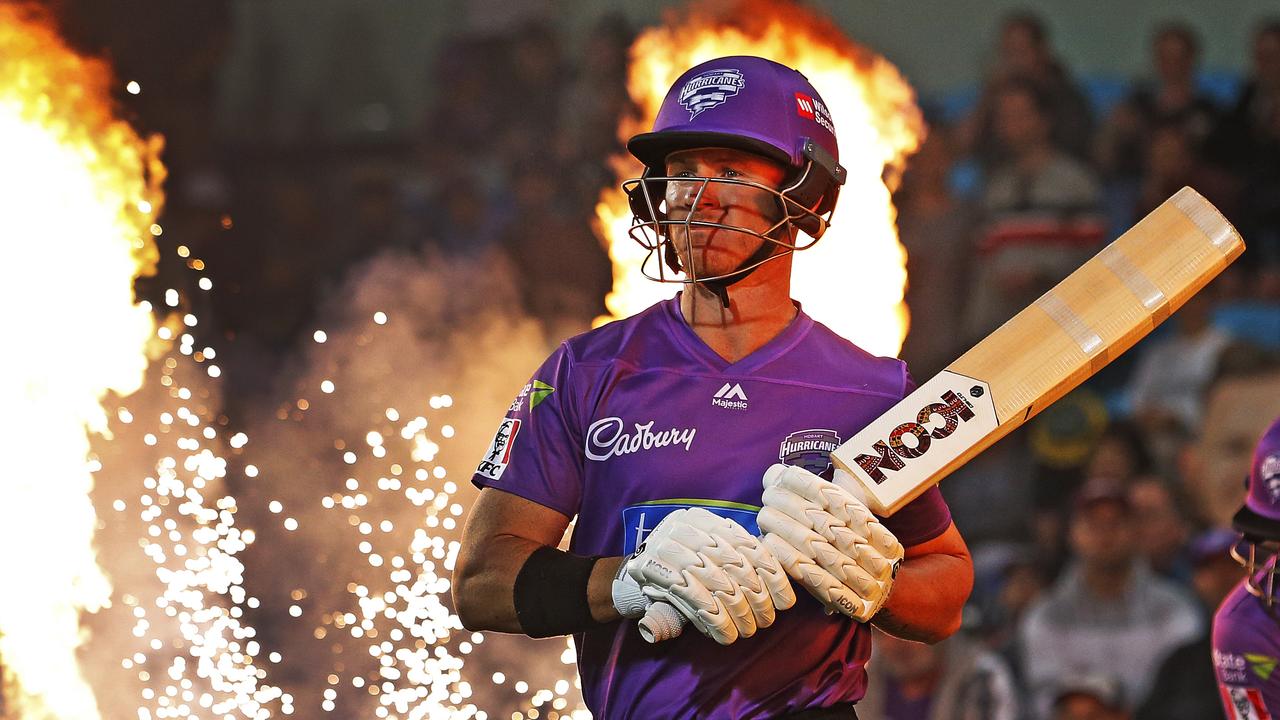 Here we go! The first game of 61 Big Bash League fixtures for the 10th season of the Summer tournament and of course the pandemic has had a say. Hub/Bubble life, quarantine restrictions, crowd limits and broadcaster squabbles have taken the gloss the tournament then add some late releasement of International players due to fatigue, it has been a rough lead-up. However the Hobart Hurricanes and the Sydney Sixers are game 1 at Blundstone Arena on Thursday night.

Draftstars are back for another bumper season and to start with posted a MEGA $40,000 contest for a $15 entry. This is the highest prize pool available online for a single fantasy contest. Also available is a $1,500 Mini and the mass entry $500 micro contest is also available.

Are you new to BBL Daily Fantasy or looking to gain some knowledge on how to achieve success in Cricket Daily Fantasy? Then set aside 30 minutes and get the headphones out, as DFR’s very own ‘Smatho’ talks to one of Australia’s most successful cricket fantasy players in ‘JT026’. In the DFR podcast they cover topics such as:

To start the tournament we are hubbing at Blundstone Arena for the opening two weeks of the fixture along with matches at Manuka Oval. Long regarded as a small ground, Blundstone has always given up high fantasy scoring to Batsman. An average of 220 fantasy points to the batsman in the BBL09 is the key to the slate.

Cool to cold conditions on Thursday night will greet the players with morning showers clearing to a breezy and cool night. We shouldn’t lose any play here. 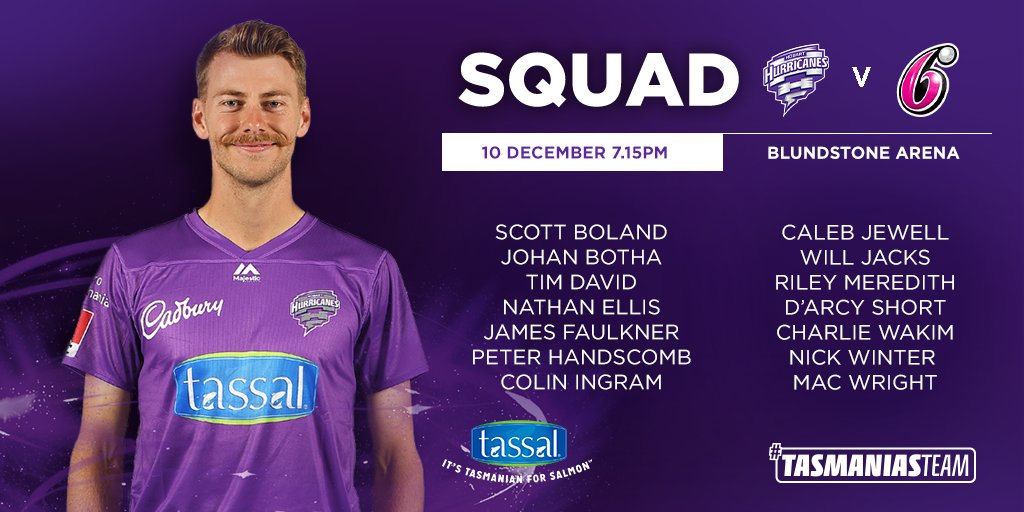 The Sixers social media decided not to let us know about Thursday's squad. But in an article late Wednesday stated that an 16 man squad will be trimmed to 13 at the Bat Flip. This is going to be fun year figuring out teams!

The Hurricanes after finishing 4th on the table in BBL09 were blown away by the Thunder in the Eliminator and spent the off season re-working the roster. Signing Peter Handscomb to sure up the middle order along with hard hitting Colin Ingram will complement the explosiveness of D’Arcy Short. Signing English allrounder Will Jacks who was the player of the tournament of England’s T20 Blast is the coup the ‘Canes needed. Surprisingly Johan Botha is back in the squad after pulling out mid tournament in BBL08 and is in line for a game first up. It is an impressive line-up for the first game with more strike power later in the tournament. The bowling stocks look solid with Shane Warne’s favourite bowler Riley Meredith spear heading an attack featuring Scott Boland, James Faulkner and Nathan Ellis. Concerns on the spin stocks but Short, Jacks and Botha should be able to cobble together 4-6 overs of spin.

The Sixers come into the season with one of the favourites tag and it must be said the markets have it right. Their top order is very good – with Daniel Hughes, James Vince and Josh Philippe are back making up the top three. Jack Edwards and Jordan Silk are workman-like without being exciting, and the acquisition of Dan Christain and Carlos Brathwaite gives the Sixers big strike power in the death overs. They have a great mix of stroke players and accumulators, and seem well equipped to deal with whatever comes their way.

The bowling unit is actually also pretty settled even though their better signings are away on international duty. Steve O'Keefe, Ben Dwarshius and Lloyd Pope are back for another season yet they may need another quick with Sean Abbott, Moises Henriques, Mitch Starc away and Tom Curran no longer with the team. Keep an eye out for the teams at the Bat Flip but I expect Gurinder Sandhu to debut for the Sixers.

The Sixers are coming in hot after smacking 220+ in a recent practice match in Hobart over the weekend. Hughes (60 off 19 balls), Phillipe (94no off 61 balls) and Edwards (61 off 42 balls) will be looking to feast at Blundstone while Dan Christain smacked a century off 33 balls in a trial match against the Thunder last week.

The Hurricanes have had a low key build up with one practice match on Tuesday against the Sixers however local players have been playing in T20 grade cricket in Tasmania. James Faulkner hit a 36 ball 73 on Saturday with team mate Nathan Ellis picking up 3-21 with the ball. One to keep an eye on is ex-Scorcher Tim David who belted 67 off 31 balls for his grade side. He may be a sneaky chance to play. What caught my eye is the 4 wickets from Scott Boland in the practice match against the Sixers and Ben McDermott’s promotion to number 3 in the batting order where he dined out for 96 runs. McDermott dined out so much that he got selected to play in the Australia A game thus becoming unavailable for the match.

With all that ammo behind us, this match sets up as a run feast. Players (especially batsman) are in form before the tournament starts and ground conditions should produce huge scoring. Targeting the top 4 to 5 batsman for either team is a must. The bowlers are expensive on this slate with the likes of Meredith, O’Keefe and Dwarshuis around the $15,000 mark. But there is plenty of value with some cheap salaries for batsmen here.

Let’s be honest, if it wasn’t for a 19 ball 60 run effort in a trial match last weekend then Hughes’ price is justified. Hughes had an ordinary BBL09 only scoring above 40FP on 3 occasions with multiple scores around the 20 point mark. However whether he opens with Phillipe or comes in at 3, his price is very attractive. A special mention to Jack Edwards who has also been smoking them in the trial games with 61 off 42 against the Strikers and 60 off 47 against the Hurricanes on Tuesday.

With a season under his belt and strong finish to BBL09, Ellis with Meredith will lead the Hurricanes attack and more importantly should bowl death overs. 6 wickets in his final 5 games of BBL09 at an average of 43FP. If Ellis is bowling 1st innings, I really love him in this spot. Not so much if he is bowling the 2nd innings.

We didn’t see much of SOK last season due to injury and player form from Ben Maneti and Lloyd Pope. He did return for the finals and finished the season strong, hence the high salary to start BBL10. SOK needs wickets and economy to make his salary work (Remember he took 21 wickets in BBL08) but I rather look at cheaper options such as Pope here.

With the raft of changes to the Hurricanes side, word from the Tassie media is that Wright could be bumped down the order to accommodate McDermott and Jacks. This got flipped on its head when McDermott was pulled for Aus A duty and thus creating a path to the top order. However if he is indeed named to open he is an OK play, as I much prefer Sixers batters who have more pedigree (Phillipe, Vince, Hughes etc).

With McDermott on Aus A duty, this becomes an opportunity for Jacks to introduce himself to the Australian crowds his talent. Likely to slot into the top 3 and bowl a couple of overs of spin, Jacks should be a popular play. But for these initial couple of games of the tournament I am not going to go chips in to start with. Wait and see approach.