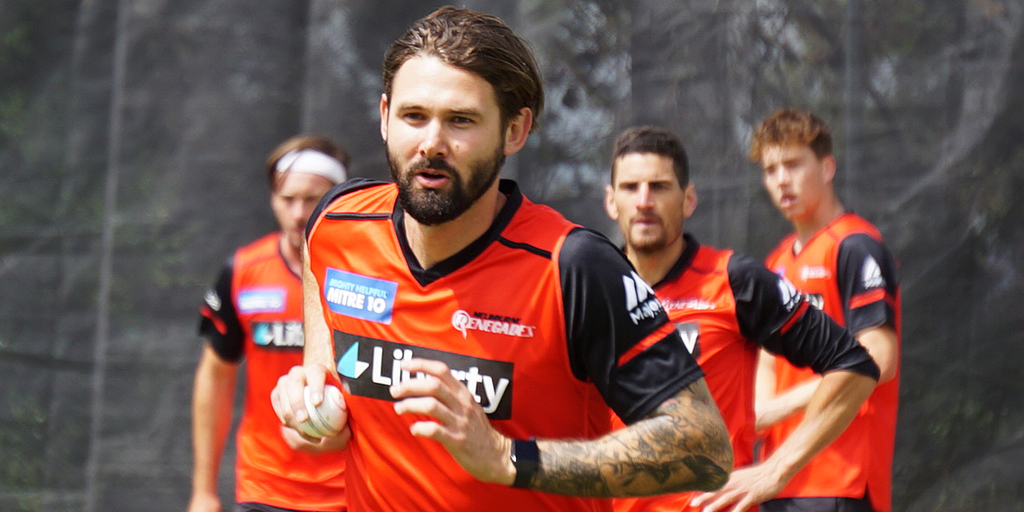 The second match of Saturday’s BBL10 doubleheader takes us back down to Blundstone Arena for the “neutral” ground match between the Melbourne Renegades and the Perth Scorchers. Outside of finals of seasons past, this fixture is at a different venue than these two envisioned earlier this year. The Renegades opening three fixtures are at Blundstone so if they can start the tournament well then that could set up a great run home once back in Melbourne. For the Scorchers their away fixture is actually pretty good to start with. They get to play on “fast” decks similar to at Optus Stadium with games at Blundstone, UTAS and Manuka Oval before Christmas.

Currently Hobart is forecasted to have some nice weather over the weekend with Sunny conditions into a cool night for the players. As we saw from the opening game of the tournament, Blundstone offers a lot of runs with the combination of a flat deck and short boundaries.

The Scorchers are fancied in the Futures markets around the nation and it comes as no surprise that they are favourites to win this match. The 16 man squad includes the recent additions in Colin Munro and Joe Clarke. The Scorchers also welcome back Jason Behrendorf and Andrew Tye after injury ruined their seasons in BBL09. Mitch Marsh is should miss due to his injury suffered in the recent IPL but the Scorchers have named him in the 16 man squad. UPDATE - Marsh has been picked in the opening XI

The Renegades who finished last in BBL09 are looking to put that car crash behind them and start another campaign back to finals contention. However Mohammad Nabi and recent signing Noor Ahmad are still in Hotel Quarantine and won’t play in this fixture. Although the shrewd signings for Rilee Russow, Josh Lalor and Jack Prestwidge will give the ‘Gades are new look and feel on Saturday night. It was also announced that Cameron Boyce will miss this game due to “health reasons” and will not feature this weekend.

The Scorchers are slight favourites in this matchup and I am really keen on their opening 4 batsman. Inglis, Munro, Turner and Clarke have the ability to score very quickly at Blundstone. And depending on the game narrative, the Scorchers can change their lineup around to suit the pace of the game. The returning Tye, Behrendorf and Richardson gives them a quick attack but the international experience of Tye will be crucial.

In saying that the Renegades will rely on experienced players in Aaron Finch, Josh Lalor and Kane Richardson to lead as they are missing preferred options in the team. Rilee Rossouw is a very handy acquisition but there is something about South African players taking their time to find their feet (David Miller from the Hurricanes comes to mind).

Finch loves pace on the ball at the top of the innings and he is certainly going to get it from Behrendorff and Richardson straight up. Finch should continue his good form from the ODI/T20 series and while he missed one game due to injury, he should be good to go here. Having Finch for the whole tournament is a bonus for the team in Red and I expect him to lead from the front 1st match. $20,000 is a stretch but let’s go Finchy!

Behold the return to the death-bowling King. Tye looked good in the recent Indian series and while his figures weren’t that great (1/31 from 4 overs in Game 3 / 1/47 from 4 overs in Game 2) Tye will find this match “much easier”. As we saw in Hobart on Thursday night, off pace change up balls were difficult to get away and Tye is the top exponent of the craft.

First of all the price is pretty steep, but secondly Richardson missed the ODI/T20 series against India to be a father for the first time. Now I can’t claim to be an expert on how being a first time father affects performance but I am thinking that Richardson might take some games to bring his stellar BBL09 form back. Tough paying a steep price when we are playing at small ground and against a stacked batting lineup.

Don’t get me wrong, Webster had a great season with the bat in BBL09 due to the fact that the Renegades top 4 keep failing. But the Gades have brought in Rilee Rossouw to do the very job that Webster does and that is keeping the innings together. If Webster remains at 5 or below in the batting order then he is an average play.

The Renegades have indicated that JFM will get a game first up which will be a thrill for the 18 year old batsman. Word from the camp is that Fraser-McGurk is super talented and has all the shots and confidence in the world. What we do not know is where the kid bats in the lineup but should be at least 5. Keep an eye out on teams at the bat flip.