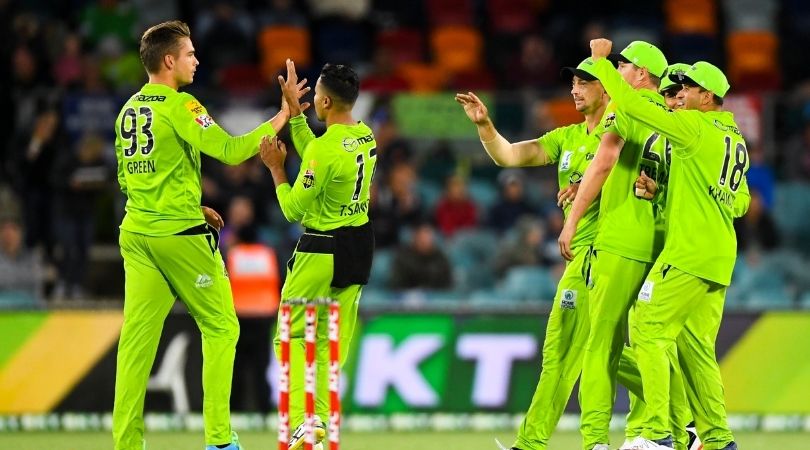 It is a New Year! First of all thank you to all the readers of your fantasy site for your continued support! Let’s hope 2021 is a good one! We start 2021 on the Gold Coast for Match 22 of the BBL with the hapless Melbourne Renegades (1-4) hosting the in-form Sydney Thunder (4-1). The Renegades coming off another loss (abielt a heart-breaking one) now face a “juggernaut” Thunder side that finally play somewhere other than Manuka Oval. Draftstars have posted a $20,000 prize pool for this match. The match is scheduled to get underway at 1915 AEDT.

You have to feel for Will Sutherland in those death overs against the Sixers. That location of that Metricon pitch for that match meant he had no alternative than bowl deliveries on the other pitch… Anyway I doubt we will see Sutherland selected for this match as the Renegades are desperate to keep their finals chances alive. The Thunder uproot from their Canberra base and now find themselves on another batting friendly deck. Although they will need to put the cut/pull shot away as Metricon is short down the wicket. The likes of Sams, Hales and Davies we soon miss the short boundaries square of the wicket and look to go back over the bowlers head.

The Gold Coast is forecasted to have showers in the area throughout the day. 3-10mm is the forecasted amount with chances of thunderstorms in the afternoon/evening. While I won’t make too many adjustments to start with, the weather situation will require monitoring towards game time. Currently the Thunder are favourites at $1.75, which initially thought this a bit of value for the Thunder.

I suggested that the Renegades will make some changes to the final XI, especially in the bowling ranks. If Will Sutherland survives then that is fine for a cheap value play on the bounce back but there's a possibility that Jack Prestwidge will get another go. As for the Batsman, I do not expect any changes after Shaun Marsh and Sam Harper batted pretty well on Tuesday.

The Thunder have become a very settled outfit and as I noted in last Tuesday’s preview, they are leaving good cricketers out of the final XI. When you score back to back 200+ scores your batsman are on fire. Alex Hales has scored 77 and 147 fantasy points in his last two matches and Callum Ferguson has scored 74, 41 and 76 fantasy points in his last three. Throw in Daniel Sams who has only scored under 20 fantasy points ONCE in this last 9 BBL games then this is a fantasy friendly side. The only injury update is that Nathan McAndrew has a groin strain and is looking to prove his fitness.

I for one wasn’t too sure at the start of the tournament if Sangha was going to be fantasy relevant with the likes of Jono Cook and Chris Green bowling the spin overs. But the performances from the tweaker has made Sangha one of the most reliable fantasy bowlers in the game. Akin to what Adam Zampa and Cameron Boyce did for their teams in 2019, Sangha is simply taking wickets while being economical. The change of ground is a worry but his confidence is sky high.

Tough to love any Renegades in this match apart from the ever reliable Richardson who once again is one of the best bowlers in the tournament. Taken 9 wickets in 5 games and has taken multiple wickets in 3 of those games. Seems to bob up for a catch as well and can hold the bat. Took 2 for 24 at the venue against the Sixers and while the salary is pretty high, I do like having Richardson in my lineups if the Thunder batsmen are brittle.

The charismatic spin bowler has toiled pretty well for the Renegades taking 7 wickets so far. However, he has not bowled economically at all with an econ rate of 9.00. Very easy to pick Hatzoglou at this cheap salary but will have a hard time taking on the likes of Hales, Khawaja and Ferguson. Worth a punt but do not expect a slate winning performance.

If only Cutting was bowling more overs that I can put Cutting back in the love category. The Thunder only bowl Cutting for 1 over which could be diamonds or dust for fantasy. His batting is great but the Thunder like to have Daniel Sams bat before him. So that $15K is a bit much on what Cutting is providing so far.

Looks like a great price for the English import but the keeper will be behind Oliver Davies batting at 5. The Thunder have been playing too well for the middle order to have any impact so not quite sure if Billings can be fantasy relevant against the poorer teams. However funny things have happened and Billings could be that last batsman you need in your lineups.