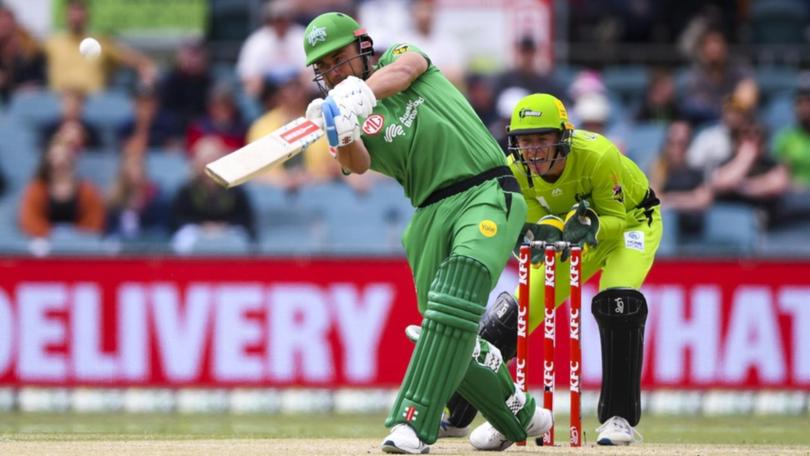 Wait… Isn’t there another game of BBL going on? Well that is correct as Match 19 of the BBL is played at the same time as Match 18. So this could be a very good spot to attack for fantasy while eyeballs are somewhere else. This match should be a good one with the Sydney Thunder (3-1) hosting the Melbourne Stars (2-1-1) at Manuka Oval. This match will commence at 1915 AEDT

We are back at the scene of the Renegades massacre with the Thunder scoring over 200+ runs and rolling the team in Red for 80 runs. The Thunder will be full of confidence after that huge Boxing day win and take on the Stars who will be bitter after letting the Sixers chase down 193. Currently the Stars are favourites at $1.70 to defeat the Thunder, which I find surprising with one of their stars ruled out. The forecast in Canberra is for some morning showers but we should be good to go come game time.

Draftstars continues to post big contest pools and tonight we have a pair of $20,000 contests to compete in along with micro, mini and stakes contests.

With both of these teams scoring high run totals last match and Manuka Oval starting to give up high run totals, then it's a recipe for more runs. Both sides batting lineups are strong and with some inclusion to both squads, it is going to be tough work for both bowling units. Currently both sides to score over 160 are at $2.00 on the bookies markets which is a good indication of high scoring.

The Thunder now have a full squad of 19 available to select. The Thunder have indicated that English batsman Sam Billings is now available for selection which gives Thunder coach Shane Bond selection headaches moving forward. Alex Ross was ready to go on Boxing Day but replacement Oliver Davies has certainly taken his chances in his powerful innings so far. Baxter Holt after being shuffled down the order on Saturday should make way for Billings who by the way has a good affordable salary first up.

The Stars will need to rejig their starting XI once again after losing Nathan Coulter-Nile with a calf injury on Saturday night. However, they do get back Marcus Stoinis who rejoins the team after a leave of absence over the holiday period. Also returning is Nic Maddison after he was denied entry into Queensland. Maddinson will be a welcome addition to the Stars side and will be looking to contribute first up.

It looks like to cater for the big Stars guns in Marcus Stoinis and Glenn Maxwell (who both are exceptional plays in their own right) Draftstars needed to make sacrifices elsewhere and the one that sticks out is Khawaja. Got off to a brilliant start on Saturday smacking 6 boundaries before succumbing to an outfield catch on 34. While this is a tougher ask, the Thunder play their 5th game on this surface and 2nd match against the Stars. No travel and familiar conditions means I like Khawaja a lot here.

Don’t worry about the price, Maxwell as we all know is a bona fide jet in this format and so far in BBL10 he is putting together “MVP” like stats. 156 runs in 3 innings at a strike rate of 153 and an average of 100 fantasy points per game. The only query so far is his bowling has copped some stick but can bob up with cheap economy if he gets it right. These short square of the wicket boundaries are just delightful and as we saw up on the Goldy, the crowd better look out.

The Spiceman hasn’t made past the 4 over powerplay yet which is a bit of a concern. Sure he has the ability but so far he has ruined your lineups three matches in a row now. The price is tempting but as I alluded to above, if I am playing one or a couple of lineups, rather have Khawaja at $500 more.

Bowling short on this surface ain’t gonna fly here. Actually the ball will fly off the bat over the fence from Stanlake. He did get a wicket at Metricon which means his fantasy average is now 11. So I guess he is in form? Save yourself the heartache and fade Stanlake here.

Did debut for the Stars on Saturday and missed out on fantasy scoring by bowling 3 overs for 23 runs. Should be better second up and show his international experience. Not sure where he sits in terms of ownership with the likes of Chris Green, Usman Khawaja and Sam Billings at around this price. This could be the little sneaky low ownership play you maybe looking for.