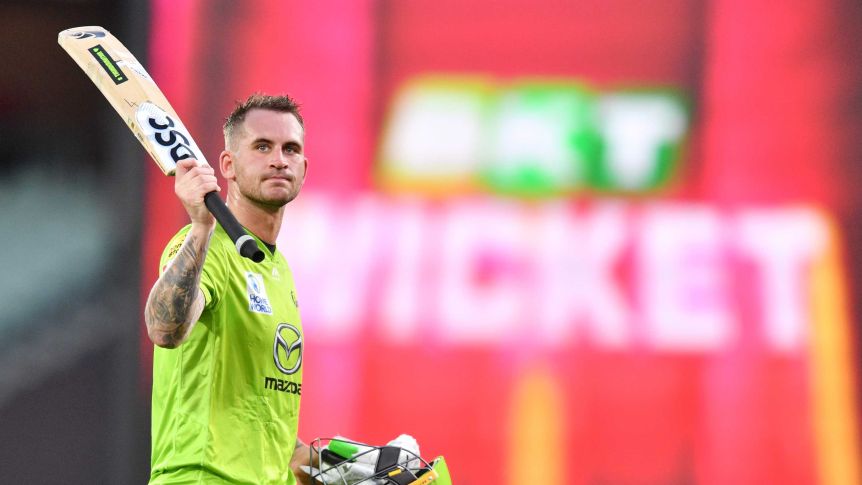 The super weekend of Big Bash cricket continues on Sunday with another all day and all night double header action. Match 51 features the Adelaide Strikers (6-6 24 Points) hosting the Sydney Thunder (7-5 27 Points) at the Adelaide Oval. Remarkably these two teams are going to play back to back games at the same ground on Sunday and Monday. This match is scheduled to get underway at 1605 AEDT.

Draftstars has put up a nice $15,000 contest with $1,132 up top. Look out for the mini, micro and stakes contests that are available in the lobby! The micro has overlayed in the last couple of days so look out for that contest.

So this weird scheduling means these two teams haven’t faced each other all tournament and now finish the regular season back to back. What should be a good day for cricket is the amount of runs the Thunder scored on Friday night against the Sixers. A tournament record 232 total was plundered at this very ground and expect the conditions for runs continue. Speaking of conditions, it is very HOT in Adelaide. A forecast high of 41 degrees will greet the players and spectators so expect a fast and flat surface. Currently the Thunder are slight favourites with the books at $1.75.

The Strikers are no slouches with the bat at the Adelaide oval, who put up 197 runs in their win against the Heat. So if this match is a run fest, then the fantasy points are going to be plentiful. Alex Carey and Alex Hales scored 399 fantasy points between the two of them last match, so to have any chance of taking down a Draftstars contest you need to hit on the right batsmen in this one. Adelaide Oval has always been a good chasing ground but these two teams put up unchaseable targets in their last match. The Bat Flip is going to be very important for this match.

The Strikers shouldn’t make any changes from their side on Thursday night. A side that mixed up the batting order once again. Since they won pretty easily, expect the same order once again. But you never know they may want to bring in Jono Wells for one more go.

As for the Thunder, once again expect another unchanged lineup with Daniel Sams still out with his hand injury.

Oh boy, the Alex’s are both over $20K! Just like when you play on a Stars slate (Maxwell and Stoinis) you could choose to play other options at fair cheaper prices than trying to extract value to get to these two. But man these two players are in incredible touch, especially Alex Hales. In Hales last ten matches he has failed to score more than 20 fantasy points twice and has scored over 70 fantasy points 6 times out of 10! For the Strikers, Wes Agar is also having a big season with 4 scores over 75 fantasy points in his last 8 matches including a season high 113 on Thursday.

Back to the top of the order and was only 20% owned against the Heat. Banged a 56 point fantasy effort before getting out too early. This will be a tougher matchup against the Thunder bowlers, but should enjoy Milne’s and McAndrew pace bowling on this deck. With the other openers at 20K and Khawaja out of form again, I would rather this sweet spot.

Liked him against the Sixers and duly saluted with a 33 runs off the bat from 14 balls and picking up a wicket for 86 fantasy points. The salary hasn’t budged and he will be called upon for his late power hitting. With Sams still out and bowling more often, I am going back to Cutting once again.

Remarkably let me list what Davies has achieved in his last 5 matches for fantasy scoring: 2, 10, 0, 0, 0. We keep picking him because he is cheap and each time he has come up dust. Sure he didn’t get an opportunity to bat on Friday night but with Billings and Cutting providing power hitting, we need a collapse for Davies to become relevant.

No longer opening the batting and now playing that middle to lower order batsmen. Renshaw has had a pretty lean tournament for BBL10 with only 1 score over 50 fantasy points. Will require a collapse of the top order for Renshaw to face 10 overs and I cannot see that happen.

If you want to look at fantasy patterns in scoring then Siddle is due for another donut. Scores of 110, -1, 108, 0 in his past 4 really shows he is either dust or diamonds. Probably preferred Siddle in the 2nd innings bowling as he bowls in the death overs looking for wickets. So who knows what we would get from the higher end bowlers on this slate.