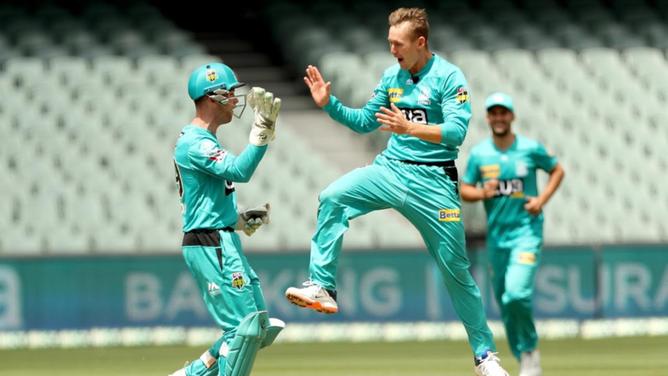 After a few days break, the BBL continues the finals with “The Challenger” scheduled for Thursday night. The Brisbane Heat who have gone a giant killing run now face the Perth Scorchers who unfortunately lost their home ground advantage. The Perth area lockdown has forced Cricket Australia to move the match from Optus Stadium to Manuka Oval. On paper the Scorchers look like a good thing, but this season’s BBL has been a quirky one and you just never know with the Heat. The match is scheduled to get underway at 1915 AEDT.

Draftstars has put up a $25,000 slate with a top prize of $2,444, the 2nd last slate of the season. The pricing is dominated by in form batsmen Marnus Labuschagne, Scorchers bowler in Jhye Richardson and Heat power hitter Chris Lynn. There are plenty of cheap options which could allow you to fit them in if you wish to go down that route.

A check of the weather in Canberra shows that chances of showers throughout the afternoon and evening. That chance is currently 50% and the amount is minimal, so at this stage we should be ok for a full match. The markets have the Scorchers as favourites at $1.70 and a check of further markets show that either team making over 160 runs is around $1.60.

Remarkably but in the end not surprisingly, the Brisbane Heat have actually played 4 games at Manuka throughout the season for a record of 2-2. Both losses came in December when the Heat batted first and in January the wins came from the Heat chasing. On deeper inspection teams chasing at Manuka in BBL10 won 9 matches from 12. Just goes to show the early form of the Heat was pretty ordinary. On a side note the Scorchers have played three matches in Canberra this year for three losses (each loss comes from the Scorchers batting first). Fair to say you want to win the bat flip and bowl first here.

While the Scorchers lineup has been pretty rock solid for the past three weeks, the Heat seem to like this fuddy duddy X-factor business. The Heat either bring in Jack Wildermuth or Morne Morkel depending on the match and no doubt will want to continue deploying this tactic. The man that keeps getting tapped on the shoulder is Xavier Bartlett who gets to bowl one over and gets subbed out. This is not particularly great for fantasy, who remarkably bowled a maiden in the first over (27 fantasy points in total) against the Thunder and left the game. 22% of entries took the risk in the Knockout on Draftstars but I don’t think that number will be that high this time of round.

Also keep an eye out on the top 6 for the Heat. Joe Denly actually opened and Sam Heazlett was pushed down to 4 (was named at 2). Heazlett scored a match winning 74 so I am not too sure if they put Sam back at the top of the order. Keep an eye out for the Heat lineup at the flip for any clues on what they will do.

One of the big reasons for the Heat’s current run is the performance of their leg-spinning duo of Mitchell Swepson and Marnus Labuschagne. The duo have picked up 18 wickets together in 5 games and along with Mark Steketee who has 24 wickets in the tournament, are the biggest threats for the Heat. If the Heat win the flip and bowl, I would be looking to get a combination of these three.

The same can be said for the Scorchers who have Jyhe Richardson leading the table for the highest wicket-takers with 27 wickets. And they will also have experienced bowlers like Andrew Tye, Jason Behrendorff, and Fawad Ahmed to depend on.

In saying that, with 9 out of 12 matches won by the team batting second, I will be looking to go heavy on teams batting second and combine with the same team bowlers in the first innings. This will create very heavy one-sided teams but recent slate winners have shown this can work.

With his past 4 matches over 63 fantasy points per game and a batting lineup containing only 1 left hander (Colin Munro), Swepson is well in the game here. Gone 4 consecutive games taking two wickets and underneath the economy bonus. Will this continue? I believe it will, especially if the Scorchers are forced to bat first. Quality bowler in a big game and I like him here.

I really like Inglis here as he has the game to adapt to the current theme of the game. Dig in to build a partnership after early wickets, or go full throttle through the late overs and build a dynamic score. 3 out of the last 4 matches he has gone over 160 in Strike Rate which is fantasy gold. Will be highly owned but he is essential if I am going to build Scorchers heavy teams if they bat 2nd.

Gregory just hasn’t contributed on the fantasy scoreboard with just an average of 30 points in his last ten matches. Only taken 1 wicket in his last 8 matches and if he does bowl, he is not bowling the full 4 allotted. Can swing the bat but the Heat top order have got the job done in the finals.

Cheap price tag is alluring but Laughlin has simply gone the journey either before Christmas or when he was recalled into the side. Look he takes a great catch, but that ain’t going to win you big tournaments. Would rather take a flyer at Morne Morkel who is $200 cheaper and is almost an auto play if named in the starting XI for the Heat.

The second most expensive player that could pop your lineups if he fails up top. It has been a great BBL for Lynn but stumbles against the Scorchers in Adelaide and against the Strikers in Canberra has seen his price come down by $1,000. Unlike players in his price range you are taking the most risk as the likes of Labuschagne and Richardson are involved throughout the match. However, this Manuka oval is small and Lynn has the appetite for big Dorothy Dixes!