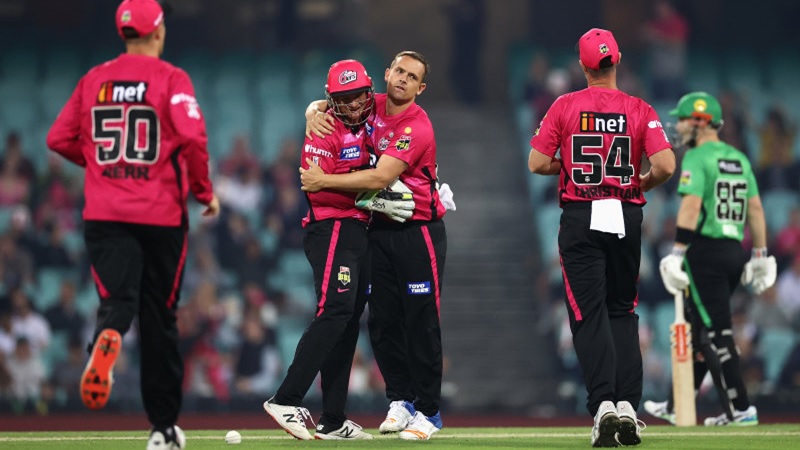 The BBL11 season is underway and so comes the double headers! Let’s cover the first match of Wednesday’s doubleheader which is Match 4 with the Sydney Sixers backing up from their big win on Sunday night taking on the Hobart Hurricanes at UTAS Stadium in Launceston. With the Ashes Test starting earlier that day, you will need to be on your toes with a start time of 1835 AEDT.

Draftstars are continuing the great fantasy BBL prizepools with a $25,000 contest on offer for the main slate, with supporting micros and high roller contests available.

No issues with the weather in Launceston for Wednesday night, cool partly cloudy conditions greet the players at a venue conducive to average run scoring. UTAS was only used twice last season with one game being washed out and the Strikers chasing a modest 146 against the Hurricanes in the only result.

The Sixers really gave the Stars a fair dinkum thrashing on Sunday night with Josh Philippe, Moises Henriques and James Vince slaying them with the bat and Steve O’Keefe, Hayden Kerr and Sean Abbott finishing them off with the ball. Daniel Hughes and Jordan Silk have early votes for the “Jodie Hicks” award. Dan Christian is probable for this match after the birth of their new child on Monday (has flown down to Launceston). Sean Abbott is OUT in the same situation, expecting the birth of a new child any day now.

The Hurricanes come into another season looking for their first piece of silverware after numerous seasons showing potential but not taking that final leap. The core remains in this side, but the rotation of imports has weakened the side somewhat with the recruitment of English pair Jordan Thompson and Harry Brook. Unfortunately, both recruits are unavailable with Thompson being a close COVID contact and has remained in Sydney, whilst Brook will be playing for England Lions to start with. But the big news out of the ‘Canes camp on Tuesday is that Ben McDermott had surgery for an undisclosed injury and is out until Christmas. This will provide an opportunity for either Mac Wright or Caleb Jewel to bat at 3. Both are fine replacements for that number 3 position, but likely that Wright will be pushed up the order. Riley Meredith is out with a hamstring injury but is progressing well whilst recruit Joel Paris is fit and ready to go to debut for the team in Purple. Sandeep Lamichhane is back for a second season and will be looking to improve on his 8-wicket haul from 8 games in BBL10. The Hurricanes named three replacements in Tom Andrews, Jordan Cox (52.4 ave 142SR) and Tom Lammonby (27.3ave 162SR). Cox and Lammonby both played in the T20 Vitality Blast and put-up impressive numbers. Remains to be seen if either of these three get a game straight up.

With McDermott and Meredith out, there is plenty of cheap pieces to get up to either D’Arcy Short/Matthew Wade along with expensive Sixers options. Expect the field to deploy a ‘Stars and Scrubs setup trying to jam these premium pieces in.

Australia’s T20 World Cup hero has shaken off injury to lead the Hurricanes for the entirely of the tournament. Wade was caught up with international duty in BBL10 but that didn’t stop him smacking 85 off 44 against the Sixers late last season. Back at the top of the order after playing lower order for Australia, I am expecting Wade to shine on this Launceston deck first up.

Whilst Vince and Philippe got off a fast start against the Stars, it was “Mozzy’s” impressive innings that caught my eye. Just seemed to be doing it easy in his 76no off 38 balls. The Hurricanes bowling stocks are weakened without Scott Boland and Riley Meredith so I am expecting Henriques to continue his big start to the season.

Didn’t get a go on Sunday night and on inspection, Hughes has been offering next to zero fantasy production for quite some time now. Previous Draftstars extending back to BBL10 include 0 / 18 / 21 / 3 / 14 / 1 / 11 and 11. Sure an innings of substance coming but I’m good to ignore until a role changes or time at the crease occurs.

Extraordinary scenes on Sunday night as the Stars proceeded to become under 13 batters against his bowling. 4 overs for 4-14 (147 Draftstars Points) will certainly not be matched for the rest of the tournament. I don’t really like him in this spot against a much better top 6 in the Hurricanes but you must respect his ability to keep it tight in the powerplay and throughout the middle overs.

The theme of the tournament so far is the replacements for International duty, injuries and now COVID isolation. This is something we are going to get used to before it all settles down. By my count we may have up to 5 players who are in serious contention to play on Wednesday. My pick (if picked) is Josh Kann the hard-hitting allrounder who the Hurricanes actively recruited from Queensland. However, if replacements players in Tom Andrews, Jordan Cox or Tom Lammonby get a game then they can be considered. A perfect who knows scenario. 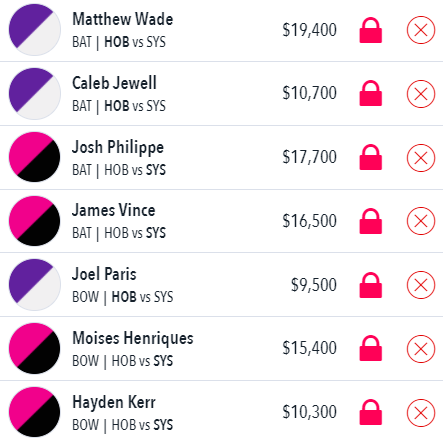