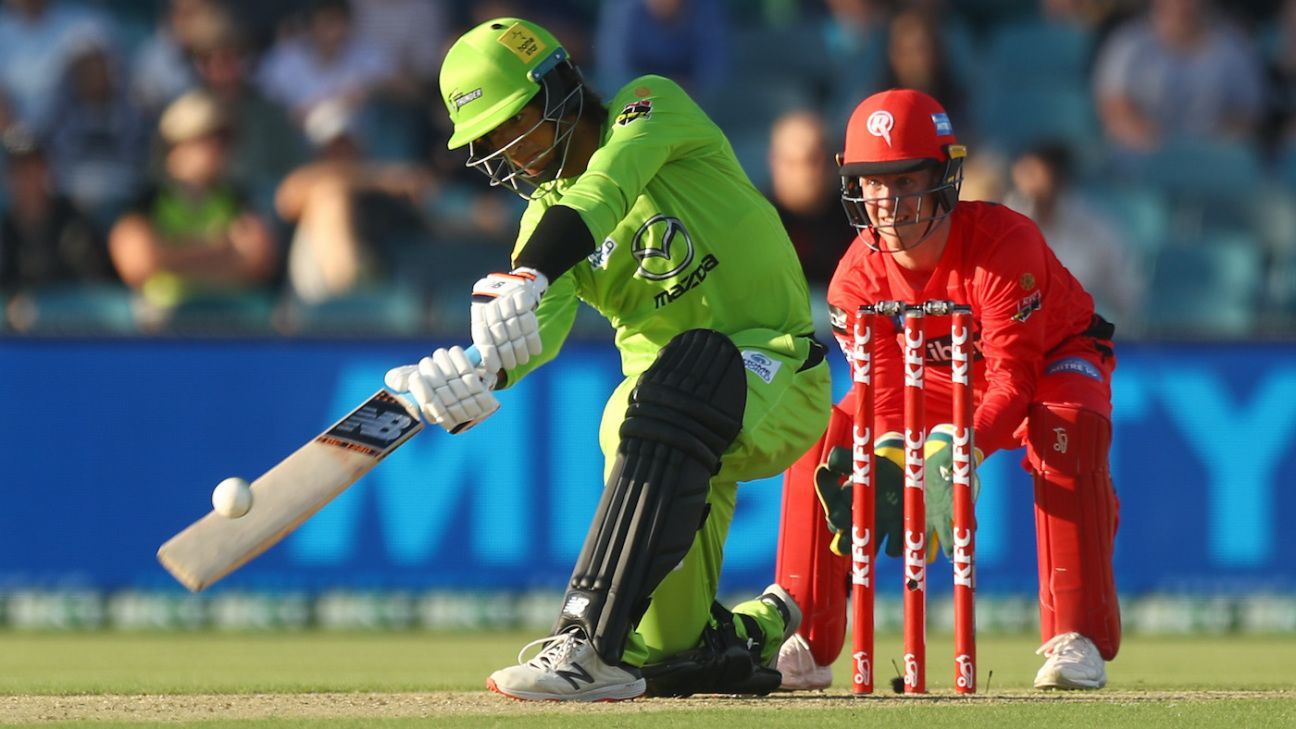 After a rare day off, the Big Bash resumes with another double header. We start with the Renegades playing host to the Thunder at Marvel Stadium in Melbourne (6:05pm AEDT). The Renegades got a much needed win over a decimated Heat team, taking their record to 3-5 and crucially sitting in 5th place on the table. The Thunder are cruising at 6-3 after 4 straight impressive wins over the Strikers and the Scorchers. Obviously weather will not be an issue with the roof, and the pitch has been playing faster than in previous seasons.

Draftstars has put up a $15,000 contest, with top prize $1133. There are also other great contests including the High Roller, Mini, Micro and various others.

The Thunder are $1.65 favourites, and as I said have put together a nice run of form. A big victory would have them breathing down the Scorchers necks at the top of the table. Some hat trick heroics from Sandhu was the feature of the last win, but the form of youngsters Sangha, Gilkes and Davies in the batting has been massive in their recent run. Hasnain was enormous and frightening in his debut, and there is plenty of upside left with Hales and Sams yet to hit the heights of previous seasons. Tanveer Sangha could come back in for Sandhu or McAndrew, adding more class and versatility to a strong bowling attack.

The Renegades are still bad but less bad than they were earlier in the season. That’s in large part due to Finch, Marsh and Maddinson bringing their experience to the top of the innings. It’s meant that Harvey, Seymour and Fraser-McGurk have less of a role to play, but that is a good thing for the team. Nabi, Khan and Richardson showed that they are the class of the bowling lineup in the win over the heat, while it will likely fall to youngsters Sutherland and Evans to step into the roles left open by Reece Topley and James Pattinson.

The departure of Sam Billings on international duty should see Ross slide back into the middle order at #4 or 5. He can play a similar role to Billings, holding the innings together and then accelerating late. With a couple of nice scores earlier this season, we know that the ceiling is there, and hopefully the masses will stay off him after a few games off and a bad L3 form score.

After a bad first 4 games, Green was close to minimum price and low owned. As predicted, that was a recipe for a run of high scores, which has led to 5 straight scores of 40+. It might not be sustainable, but against one of the weaker teams I think his price is clearly still too low for his strong historical output. His numbers are similar to those of Cutting and Khan, with a $2,000 discount. Tanveer Sangha is also far too cheap if he plays.

I’ll keep using Finch, because he’s still failed to pass 50 points in 16 of his last 21 Bbl matches, after just getting there in the last game (50.25). With a quality Thunder bowling group, in particular the rapid Hasnain to deal with, there’s no way I want to touch Finch in this one. With his ownership often approaching the 50% mark, it’s a textbook fade.

He’s been good so far this season, averaging 40 in 8 games. His career average in the BBL is 37 in 24 games. What he’s doing might be sustainable but I’m happy to wait for an easier matchup (and better price). Everyone in the Thunder top order can do plenty of damage to the spinners, and in particular Alex Hales if he gets in a mood could quickly ruin the figures of Khan and most other Renegades bowlers.

Like Green, this is Nabi format, and his versatility has historically seen him score at a high level in the BBL. He started as a sub last game and came into the game to score 98 points at 1% ownership. If he’s sub again, it’ll be worth considering whether history can repeat itself. If he starts he’s a little too cheap despite being not he wrong side of 35 and very volatile this season. Mohammad Hasnain is the other international with question marks, mostly revolving around whether the Renegades ageing and inconsistent batting lineup can handle his extreme pace. Definitely worth keeping both of these internationals in your plans. 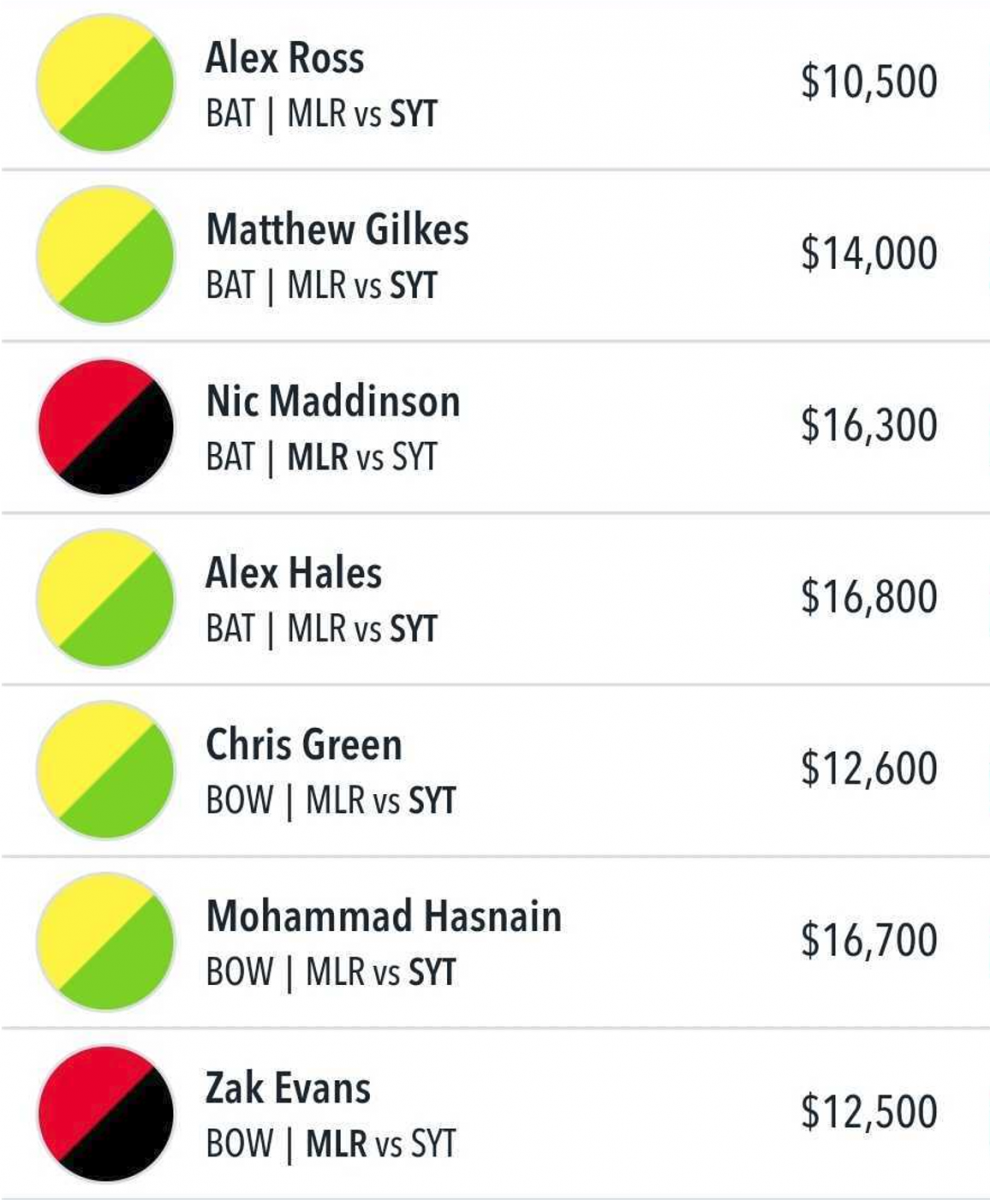