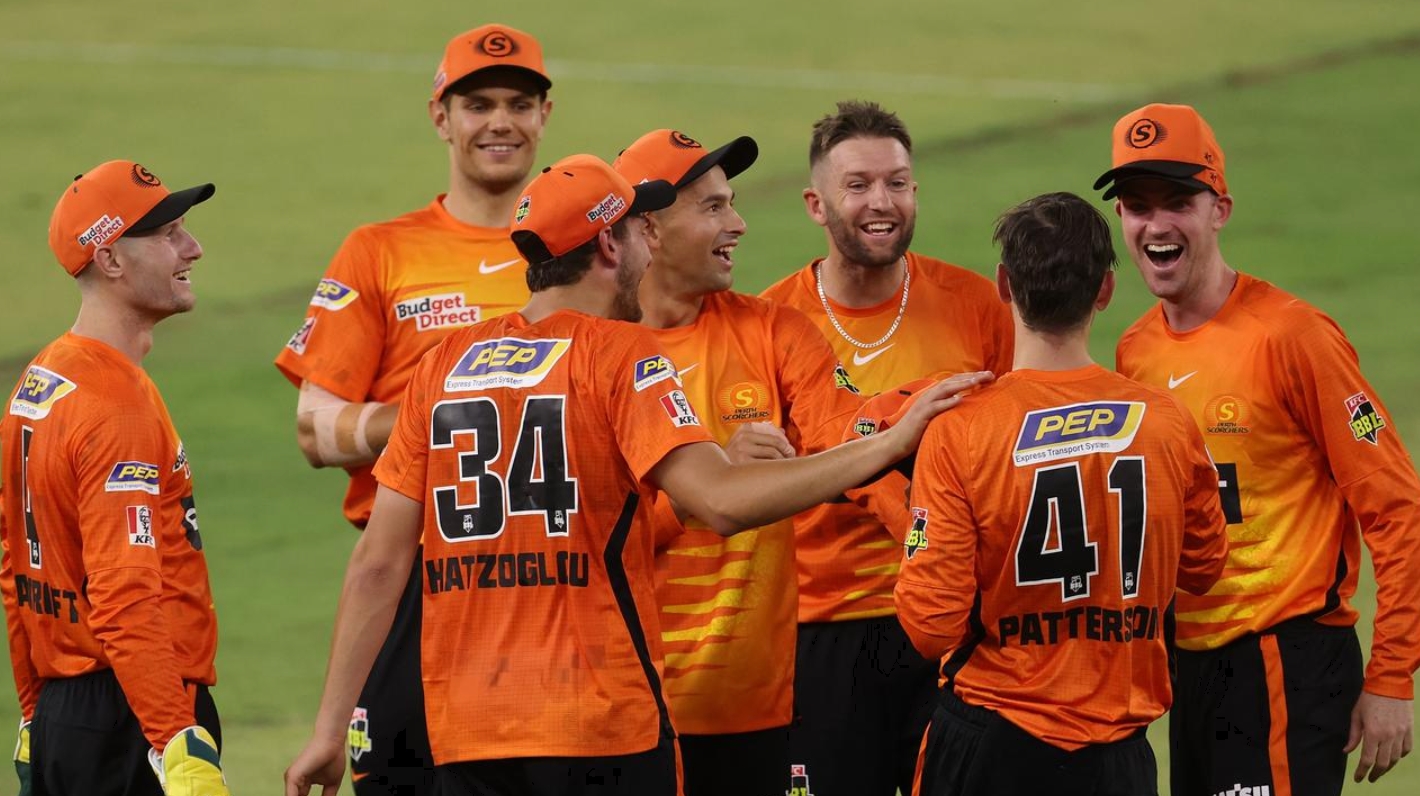 It’s top versus bottom in BBL11 on Wednesday evening, as the struggling Melbourne Renegades take on the undefeated Perth Scorchers at Marvel Stadium in Melbourne. The action kicks off at 7:15pm AEDT. We’re hoping for a competitive match, but the fortunes of each team have been polar opposites this season, so we could be in for another old-fashioned shellacking.

Draftstars will keep the action going with another juicy $25,000 contest to get stuck into, along with a great range of supporting high roller and micro stakes contests. 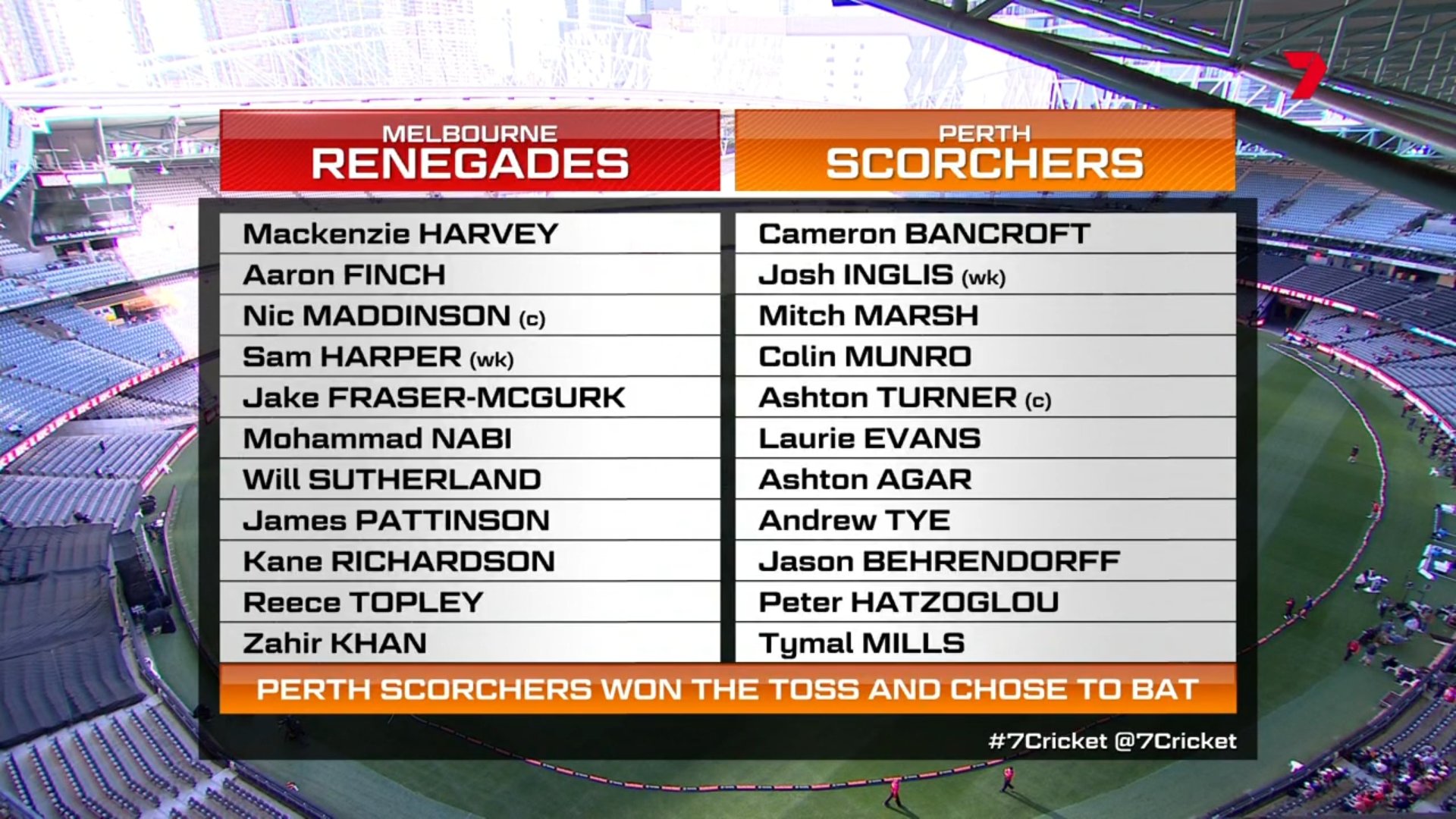 It’s hard to find many positives in the Renegades start to the BBL11 season. Their youngsters have been thrown into the deep end, and while they split their games against the Strikers, they were comfortably beaten by the Heat in their last outing on December 13th. It was a soft draw to start the season, and they only have one win to show for it, so it’s all uphill from here! The positives are that they’ll regain a couple of important cogs for this match, that could have some interesting fantasy implications.

Aaron Finch is back at the top of the order after recovering from knee troubles. He’s one of the most destructive in the game at his best, and he is the skipper of our World Cup winning national T20 side, but it’s been a long time since Finch really took hold of a BBL game by the scruff of the neck!

Another who has disappointed in BBL colours is new skipper Nic Maddinson. We can’t call it “potential” anymore, as Maddinson seems to have missed the many boats that have left his docks over the years. Capable of absolutely anything, but often delivers nothing. How you manage the Finch/Maddinson selections will be crucial to fantasy success tonight!

James Pattinson may also return to add some bite to the Gades bowling, and alongside Reece Topley and Kane Richardson, form a solid bowling lineup.

They will be running into a red-hot Scorchers outfit who scorched the fancied Hurricanes in back-to-back matches. With wins over the Strikers and Heat as well, it’s been a perfect start for the team from the West, despite not being able to get home due to Covid protocols.

Their side is extremely settled, and the fact they are leaving out the likes of Cam Bancroft, Aaron Hardie and Matthew Kelly from their starting lineup, says plenty about their depth.

Kurtis Patterson has been a revelation this season at the top of the order, defying the critics who labelled him as a red-ball cricketer. Throw in Colin Munro and Mitch Marsh, who have both blasted hundreds this season, it’s a formidable top order. Josh Inglis is the one who has missed out so far this season, but you’d think he’s due to go large.

Andrew Tye continues to get wickets for fun, while Ashton Agar is finally showing his all-round abilities by blasting 30* from just 11 balls at the death last match.

The Gades look a better team on paper than previous matches, but the Scorchers are massive favourites here at just $1.51 with most sportsbooks, so expect the winning team to have some Scorchers flavour. According to our BBL11 Points Against Data Tools, the Scorchers have been the stingiest team in the BBL11 for points conceded, while the Renegades have conceded more bowling points than any other team.

Inglis is due. After being in contention for the national side at the start of the summer, he missed the first few games of BBL11 before posting scores of 2 and 0 in his last two games. He’s too good to continue that lean run, and he can bounce back here in a big way against the lowly Gades. He may open the batting (depending on Patterson’s fitness) and takes the gloves, offering multiple ways to score, and his price tag is good value after dropping in price.

If I’m going with a big Scorchers victory then they are likely to roll through a fragile Renegades batting lineup, and that means more wickets for Andrew Tye. He’s taken 10 wickets in the first four matches so far this season, and even backed that up with some rare economy bonus in the last match! Throw in some very capable batting talent, and Tye seems a sound pick even at the price.

Patterson has jumped significantly in price and that makes him hard to touch. Sure he’s in form, but historically, he isn’t the best T20 cricketer and as a one-dimensional fantasy scorer, I’m happy to fade, especially if we’re backing Inglis to do well.

The most under-utilised, or perhaps under-performing, all-rounder in the country is Will Sutherland. Should have more influence in games as that big-hitting, fast-bowling option, but he’s still struggling to find his feet at this level. Took two wickets in the first game and looked good but backed that up by only bowling one over in the next two matches, with one of those going for 21 runs! It hasn’t been much better with the bat with two ducks from three hits. The price “should” be good for an all-rounder but he’s the 6th choice bowler and 7th choice batsman which often leaves him high and dry. Don’t fall for the trap and consider other budget options instead!

How you tackle these two will go a long way to deciding your results in this contest. Both are capable of destroying the opposition but both are painfully unreliable. The price of Finch is very tempting, but perhaps that will lead to increased ownership, which makes a fade even more attractive? There are a couple of other batsmen at that price point who you could easily pivot to, but if Finch or Maddinson go off then you’re cooked! 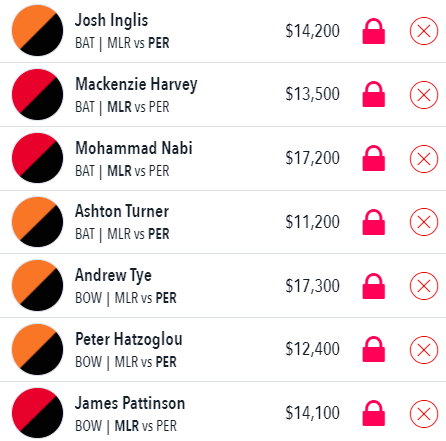