Forced to stay on the road after their home state closed the shutters, the Perth Scorchers have a rematch with the Hobart Hurricanes at the same venue from last week. Of course, the nation will get to see the big “Bison” in Mitch Marsh once again, but the Hurricanes get a bonus game at their home ground and might need to take advantage if they wish to harbour finals ambitions. With the Test match likely to be wrapped up by news time, this BBL match will take primetime on Monday Night. She is blowing a gale in Hobart with winds reaching 60km/h during the day and 50km/h gusts in the evening. Could be tough work for the bowlers here.

Draftstars have a $25,000+ contest available for Monday night along with contests for the mini, micro and High Roller.

The Scorchers were bullish after winning the Bat Flip and batting on the Blundstone surface last week. Whether they have seen a weakness in the Hurricanes ability to chase runs or like setting targets, it certainly paid off with an easy defence of 182. Likely to play with the same XI in the win, the Scorchers are showing their pre-season hype. I was sceptical at the start of the season with a lack of signings but the experience of veterans has shone though early in the tournament. At $1.65 favourites, the Punters will be looking for the sweep against the Hurricanes

Bowling Depth was always going to be an issue for the Hurricanes and once injury prone quick Joel Paris broke down, the Scorchers took full advantage. With Scott Boland still on Test Duty and Riley Meredith not quite right, the ‘Canes attack will be relied on a combination of spin (Lamichhane, Short & David) and the pace combo of Thomas Rogers and Nathan Ellis to get through the 20 overs. It is possible we may see some overs from Jordan Thompson to help out this evening. As for the Batsman, the top 3 is still competition leading with Matthew Wade, Ben McDermott and D’Arcy Short all capable of going big. Some punters are scratching their heads on Short low strike rate, but we all know that an explosive innings is coming. The roles in this team are pretty well defined, however we haven’t seen anything yet from the imports which makes rostering Brook and Thompson a risk yet great contrarian plays. 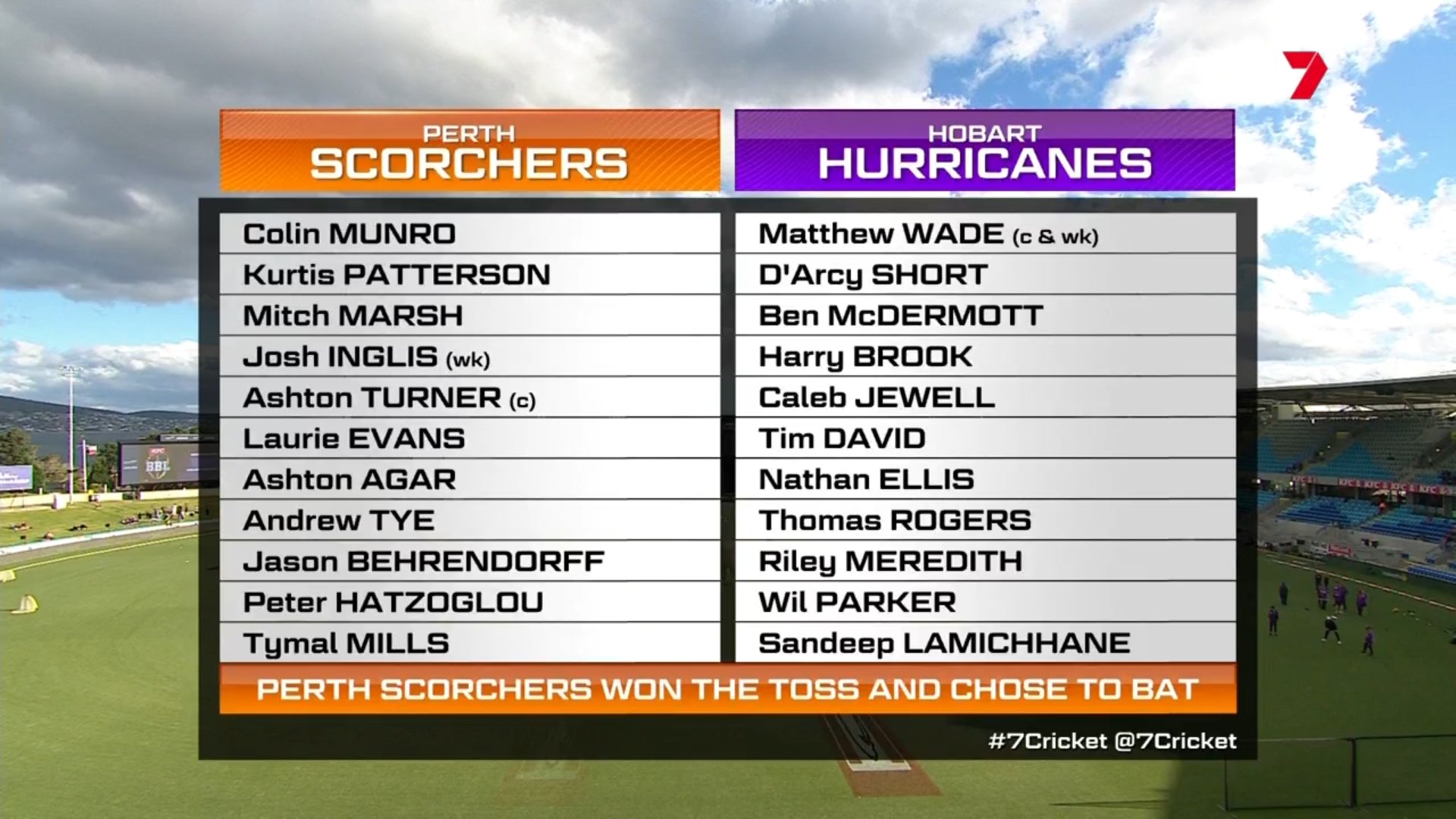 Are we chasing a 210 fantasy point performance against the same team on the same surface? Of course we are! In the form of his life, Marsh indicated he was ready to bowl last week but was not required as the Scorchers got through the ‘Canes attack. His ability to hit the long ball plus build an innings is what makes Marsh an excellent fantasy play. The price is still fantastic and unlikely to stay at these levels for much longer. Just watch out for that 50% plus ownership on Marsh.

I am little bit waring of these gusting conditions in Hobart today that would affect the bowlers, but we cannot ignore the cheap salary for Mills. A lazy 3 wickets on debut and only missed the double economy rate by 1 run. The English international gets another revenge game against the Hurricanes after doing not a lot for the team in purple.

Two failures and one massive ton, the ultimate make or break play when you have Munro in your sides. Whilst I can make a case for Munro in a depleted Hurricanes attack, I don’t want to holding a bag full of dust when paying up to $17k for the opening bat. I can you my salary best elsewhere, especially if you are investing with either Short, Wade or Marsh.

Surprisingly we may have a few cheaper options tonight with the likes of Brook, Thompson, Jewell and Evans that are all floating around that mid to late order. Handscomb also fits this mould and doesn’t seem to have the gas pedal when the required rate is going up. Sure he is a quality bat in all forms of the game but a couple failures as me staying away tonight. UPDATE - Named as X-factor tonight.

There is talk from the Scorchers camp that Patterson will slide down the order to accommodate Josh Inglis. If this occurs then Patterson’s prospects for fantasy decrease due to his one-speed batting. His innings back in Perth was exceptional but if the switch occurs then I can seem him struggling if the game situation requires it. One to watch for teams at the Bat Flip. 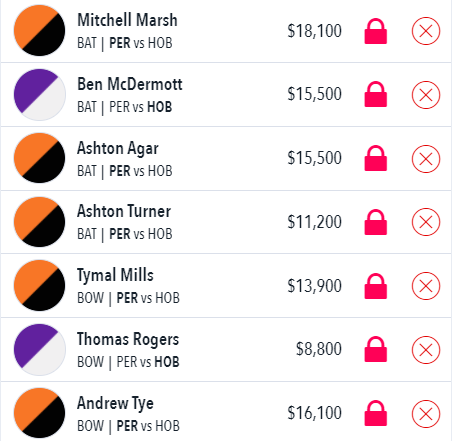