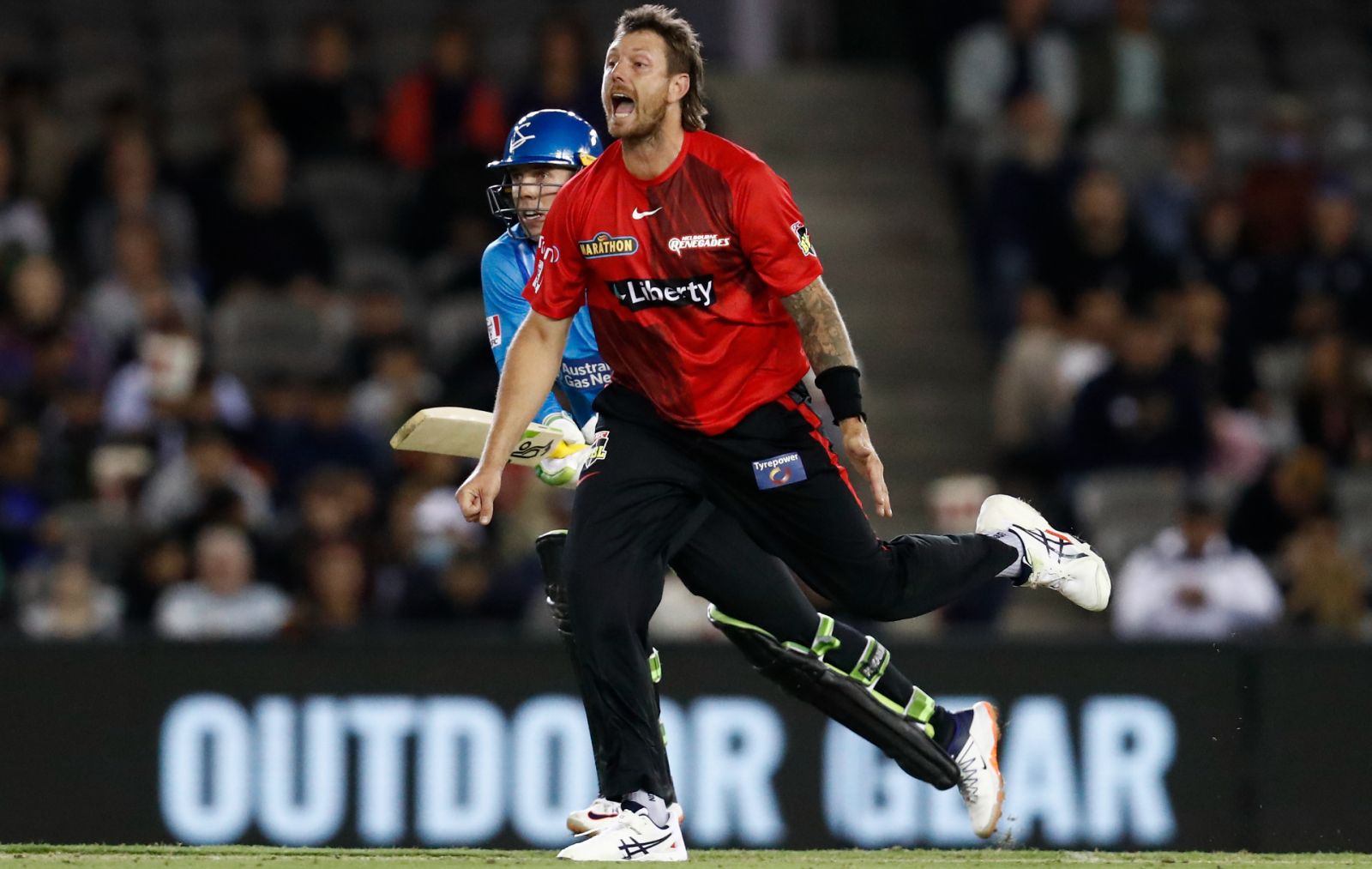 We are only 5 matches into the Big Bash, and we already have our first return fixture with the Adelaide Strikers at home hosting the Melbourne Renegades. These two only met at Marvel stadium on Tuesday night and square off once again in Adelaide. We can take some clues from Tuesday night yet the change in conditions will see a different game on Thursday night. It is nice day in Adelaide so no dramas with the weather. Let’s get stuck in!

Draftstars are continuing the great fantasy BBL prize pools with a $25,000 contest on offer for the main slate, with supporting micros and high roller contests available.

Back on Tuesday the Renegades successfully defended 153 on the back of Zahir Khan’s man-of-the-match performance. Zahir took 3 for 24 off his 4 overs including the top order wickets of Weatherald, Short and Wells. Unless your name is Rashid Khan, spinners struggle on the small confines of the Adelaide Oval so it would be a surprise that if Zahir repeats his performance on Tuesday. The squad travelling to Adelaide is only 14 deep and does not include Aaron Finch, Josh Lalor and surprisingly Cameron Boyce. Unless there were some injury niggles from the other night, expect the Renegades naming the same XI from Tuesday. The Gades pace attack did complement Zahir with James Pattinson, Kane Richardson and Will Sutherland in the wickets although Reece Topley just looks like another English Renegades paceman coming to end his career. With no Aaron Finch once again, Mackenzie Harvey will look to cement his place at the top of the order after his 56 off 46. Jake Fraser-McGurk will get more attention after his ripping catch and should slot once again at 3. 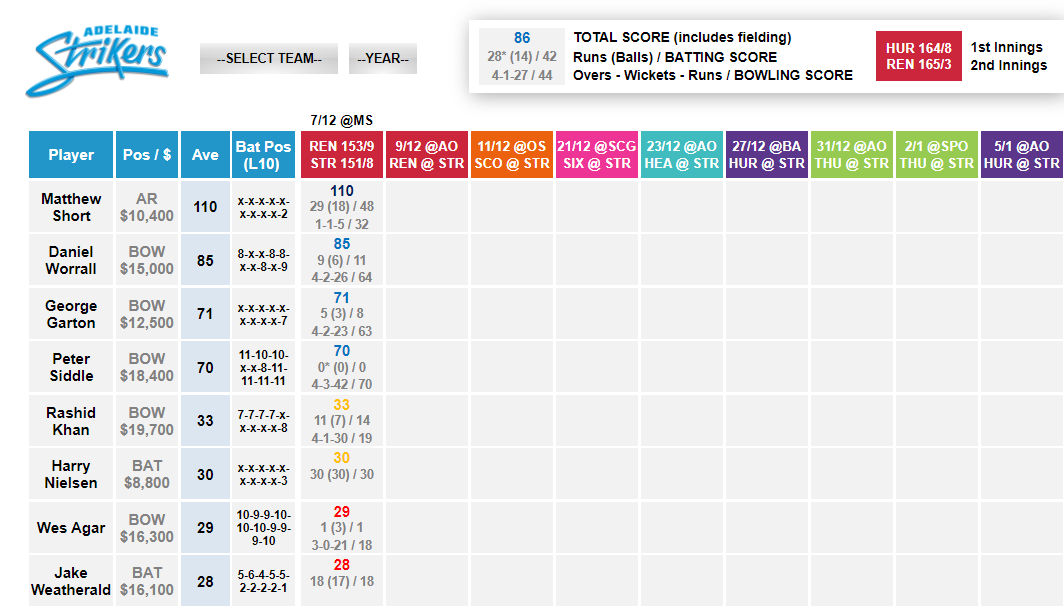 For the Strikers, a forced change will see Ryan Gibson out of the side with a hamstring injury. Liam O’Connor has been added to the 13-man squad and is likely to feature as a X-factor. Young Batter Thomas Kelly is in line to play and should slot into Gibson’s position at 6. Matthew Short will open once again with Jake Weatherald and Harry Nielsen at 3. Not exactly a fearsome combination on paper but Short did top score with 110 fantasy points through a combination of fielding, runs and a wicket. Expect the field to chase that cheap salary with Short being involved in the game. Rashid Khan was pretty unlucky in Melbourne just taking the one wicket without his economy bonus, so he will be looking to bounce back on his home deck. George Garton, Peter Siddle and Daniel Worrall all score 70+ fantasy points through 7 wickets combined. I see this as a bit of an outlier because Wes Agar didn’t bowl in the death overs. Not sure what was the story there as the Renegades gifted 6 wickets late on Tuesday.

As long there is good value on the slate, then continue to load up on Rashid Khan. I wouldn’t call his bowling rusty, he bowled quite well on Tuesday, he was just a tad unlucky at times. Back on his home surface and just remember this is not a world class Renegades batting line-up. I’m continuing to load up on Rashid.

30 off 30 on Tuesday doesn’t look that great from a fantasy point of view but the opportunity to bat in the top 3 at a cheap salary cannot be ignored. I also do like Jake Fraser-McGurk in the same spot, but I am leaning on the home ground experience for the Strikers keeper who could pick up fantasy points for dismissals.

Look it was only one game, but Topley could join a long line of English bowlers playing for the Renegades and forgetting how to bowl. 4 overs for 43 on a good surface is not going to give you much fantasy points. I would insist paying up for bowlers on this slate despite having Khan in your teams.

After coming from cross town rivals the Stars, Merlo was named to bat at 5 on Tuesday but slid down to 7 and didn’t bowl for the Renegades. Going to need some substance of an innings or at least an over or two to take a risk on cheap value. I would rather take shots on hard hitting Thomas Kelly or all-rounder Liam Scott if they get a game.

Siddle appeared in the Don’t Love It section back on Tuesday and whilst he picked up 3 wickets, the Renegades were giving wickets away like day old loaves of bread. Siddle is still a one-dimensional player and that salary is a tough one to take on. However, what you will get is a pretty low % ownership number after only going 21% owned on Tuesday. Being the skip, you just know he is going to save himself for that death bowling. 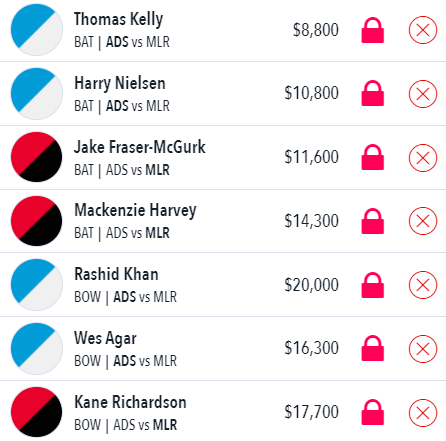