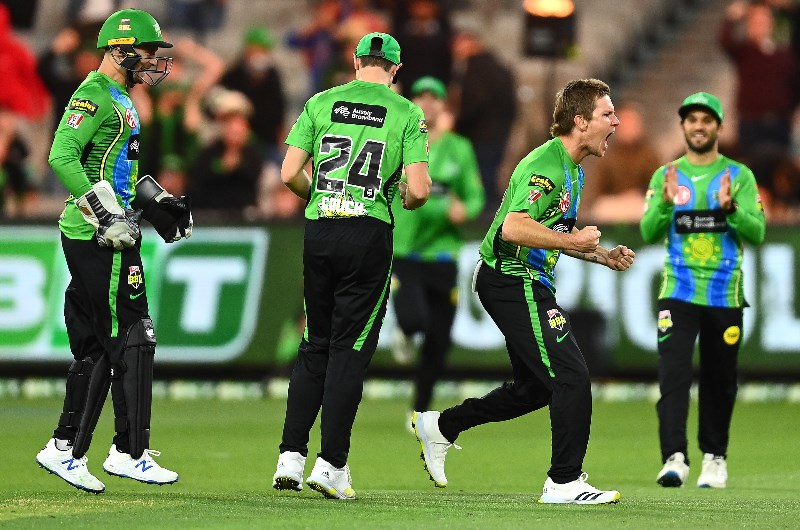 The Stars and Thunder finish off our first full week of BBL action with their second matchup of the season already. The Stars got the job done at the MCG on Friday night by just 4 runs, leaving both teams at 1-1. This one is being played at Spotless Stadium in Sydney, where the Thunder will be hoping to get the upper hand in familiar conditions. It looks like the rain will have moved on, giving us a slightly colder night for a game of cricket. 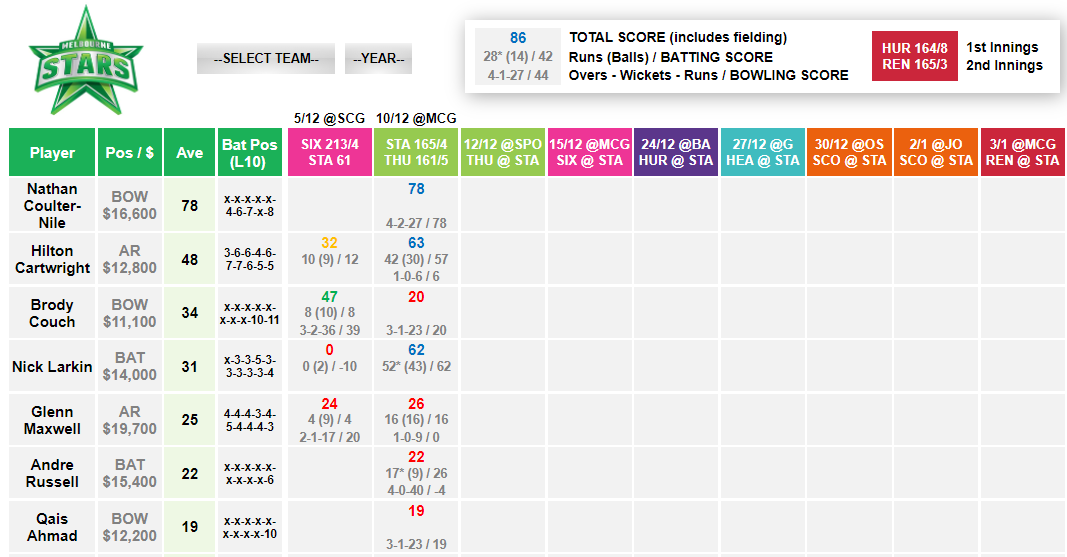 The Thunder come in as $2.05 outsiders after losing two days ago, but with the margin so close they’ll still be feeling good about their chances of turning things around. Alex Hales is yet to make an impact at the top of the order, which makes all the difference to how much pressure the rest of the lineup feels throughout the innings. Everyone else has shown enough form in the opening two matches to be confident that they can contribute.

The Stars get favouritism again and will feel good knowing that they got the W without much contribution from Stoinis or Maxwell. Instead, it was lesser lights Larkin & Cartwright who carried the batting innings, before Coulter-Nile showed his class in his first game of the season. Andre Russell had some impact with the bat in his first game, but there is more to come from him as well. The upside on this team is substantial.

I haven’t seen anything from Hales to suggest that his bad start is an indicator of being out of form. With a total of 0 points in the first two games, I see this as an opportunity to invest in one of the premier BBL players of recent seasons with a discount on both price and ownership. Being a pure bat does make him very boom and bust but getting the boom games right can pay off very handsomely indeed.

After breaking out last season, McAndrew is continuing to get it done with a role that sees him get wickets at both ends of the innings. With a slight lean towards the Thunder at home tonight, I’m keen on McAndrew as potentially overlooked and under-priced part of a strong Thunder bowling unit.

Larkin got the job done in his own unique fashion two nights ago with a half-century at barely a run a ball. Most of that innings was based on knocking the ball into the large expanses of the MCG and running hard, something which will be harder to do at Spotless Stadium. With several more explosive options at cheaper prices, I’ll back the Thunder bowlers to take care of Larkin and look elsewhere.

I’m going to pick on Stoinis one more time, as he continues to manage a niggle and come back down to earth after the World Cup win. He looked dangerous in his short innings on Friday, which might be enough to keep the masses keen to play him. I’m going to back the likes of Sams, McAndrew, Sandhu & Green to keep him quiet on their home turf and wait for a slightly easier situation to back him to get his season going.

Cutting continues to have the ultimate enigma role, bowling 1-2 overs and pinch-hitting with the bat when required. it’s a hard role to have confidence in, as we saw in game 1 when he was barely required. Still, his explosiveness means that he needs very little involvement to put a score together, as we saw in game 2 with 49 points from just 2 overs with the ball and 8 balls faced. In a tight tussle, I expect he could be required again, and could slip under the radar in DFS as he’s surrounded by the likes of Sams, Billings, Zampa and Coulter-Nile who have much more solid roles. 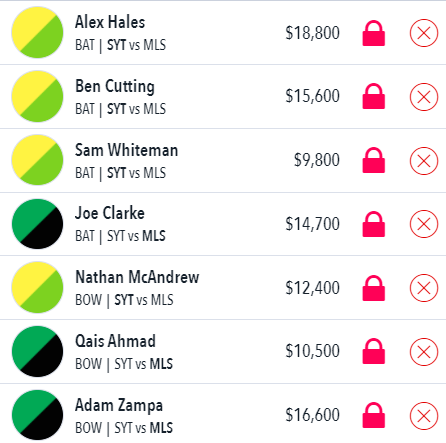