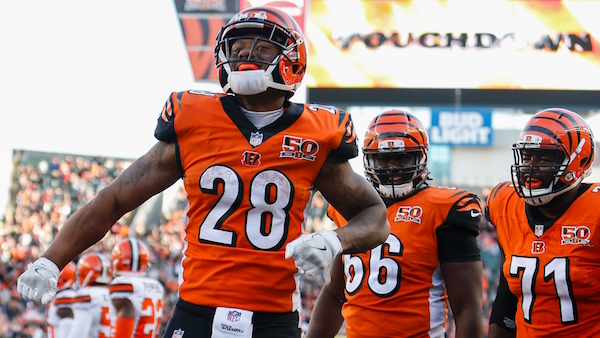 Couple of good predictions for us in last weeks edition of Chalk, Chance or Chump as Tom Brady had a massive game with 4 TD’s and Kareem Hunt had another stinker. With over $20,000 guanrateed prize-money on the table this Sunday at Moneyball and Draftstars we are back with another edition of CCC for the Sunday slate tournaments.

The best running back in the league is our Chalk this week as Le’Veon Bell goes up against NFC North rivals the Cincinatti Bengals. Bell had a monster game of almost 200 all purpose yards against the Packers last weekend and gets another favourable matchup against the Bengals here. Cincinatti allow the 5th most rushing yards per game of any team at 122 and the last time the two teams met, Bell had 192 all purpose yards.

The Aaron Rodgers replacement had a tough time of it through his first three games but started to figure it out last week against the Steelers, passing for three TD’s in a big game. Gets a good matchup here against Tampa Bay, who allow the most passing yards per game of any team in the league at a whopping 284.

Burkhead might have had a big scoring game last weekend with 19 points but he did that on just 13 carries and isn’t guaranteed anymore this weekend. The New England running back situation is horrible for fantasy owners and with Dion Lewis getting most of the carries, Rex has to rely on TD’s to score well. Don’t let the big Week 13 game fool you here.