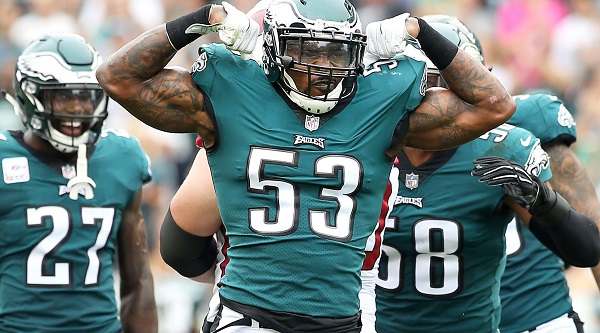 Couple of good picks in last weeks edition of NFL Chalk, Chance or Chump with Blake Bortles absolutely decimating the Colts to the tune of 330 yards and a TD as our ‘Chance’. Although the Chargers secured an upset win over the Broncos, as expected, Melvin Gordon had an absolute stinker against the strong rush defence of Denver, carrying for just 38 yards and no TDs.

Get on the train as we present another edition of Chalk, Chance or Chump for this weeks NFL Sunday slate tournaments at Draftstars and Moneyball.

Arguably one of the more well rounded defences in the league in the Philadelphia Eagles get one of the easier tasks in football this weekend as they host the San Francisco 49ers. The 49ers were dominated by the Cowboys 40-10 last weekend and with new 49ers QB C.J Beathard at the helm we think anything is possible. The Eagles are the 9th ranked scoring defence so far this season but should get a massive boost this weekend.

Averages just 16.3 points per game so far this season, well down on his output of recent years. However, comes up against the Patriots this weekend who whilst looking better the last few weeks, possess one of the leakiest pass defences in football. New England allow the most passing yards per game at over 300 and are bottom ten in points allowed per game at 23.7. If Phil Rivers is ever going to resemble the passing juggernaut he once was it will be in this game.

Stay away here folks. The 2016-17 MVP has been absolutely trash throughout the last few weeks despite having one of the most lethal combinations of skill position players in the league. Ryan and the Falcons have put up just 41 points in their last three games combined, well down on their explosive best of last season. Although they face the Jets this weekend who are just 3-4 on the season, they only allow 231 yards per game through the air and at Ryan’s price tag, he’s just not worth the risk.