Richmond will take on Sydney this Thursday night in a mouth-watering top-of-the-table clash between two powerhouse teams of the AFL. In its infinite wisdom, the AFL has scheduled this match at Etihad Stadium, rather than at the MCG, denying potentially tens of thousands of supporters the chance to watch it live. However it does perhaps even up the contest a little, with the Tigers playing the MCG like a fortress, while Sydney do enjoy being under the roof at Etihad.

In our new “Crunching Numbers” series, the boys at Fantasy Boss have dissected the game in detail and found a few statistical gems that you can use when constructing your fantasy AFL lineups this Thursday. Read on for their best fantasy AFL tips for the game!

Firstly, let’s take a look at the fantasy points against by team statistic. Across the entire league, Sydney have conceded the second fewest total fantasy points over the 2018 season, and in the last five games they have been the lowest. They also have only conceded scores of 100+ to individual players in the opposition an average of just 2.6 times (season) and 2.0 times (last five games).

What does this mean? Sydney don’t make it easy for their opposition to score fantasy points against them, so you’ll need to beware that there are potentially many unfavourable match-ups by position for Richmond players this Thursday.

One of the big reasons for Sydney’s stinginess when it comes to conceding fantasy points is the form of tagger George Hewett.

Hewett’s tagging numbers (pictured right) speak for themselves. So who does he go to this week?

It’s likely it will be either Trent Cotchin or Dusty Martin. If it’s the latter, then Martin becomes an AVOID based on this.

Dusty’s recent form doesn’t look great anyway, with an average of just 74 fantasy points over his last five games, including a lowly 48 scored against North Melbourne when shown close attention from another tagger in Ben Jacobs.

Here’s some other plays worth considering this Thursday night:

Jake Lloyd has a team high season average of 99 for Sydney and a last five average of 108. No surprise he top scored last round with McVeigh out of the team so definitely worth consideration.

If you exclude Jack Riewoldt’s Round 10 score of 1 when he was knocked out in the opening quarter, he is averaging 80 for the year. That’s a pretty solid number and represents value with his reduced price tag due to his injury-affected average.

Be wary of paying an increased price for Daniel Rioli this week based on his 82 in his first game for the year last week. Last year Rioli average 52 and only topped his 82 from last week on one occasion. Tread carefully!

Here you can crunch the numbers yourself with the ever-popular DFR Fantasy Boss cheat sheet! Every player from both sides, including their recent fantasy numbers, projections, Draftstars price tag and their value. Refer to this table when you’re putting your lineups together to see if you can find the best-priced players to fill your AFL fantasy lineup. 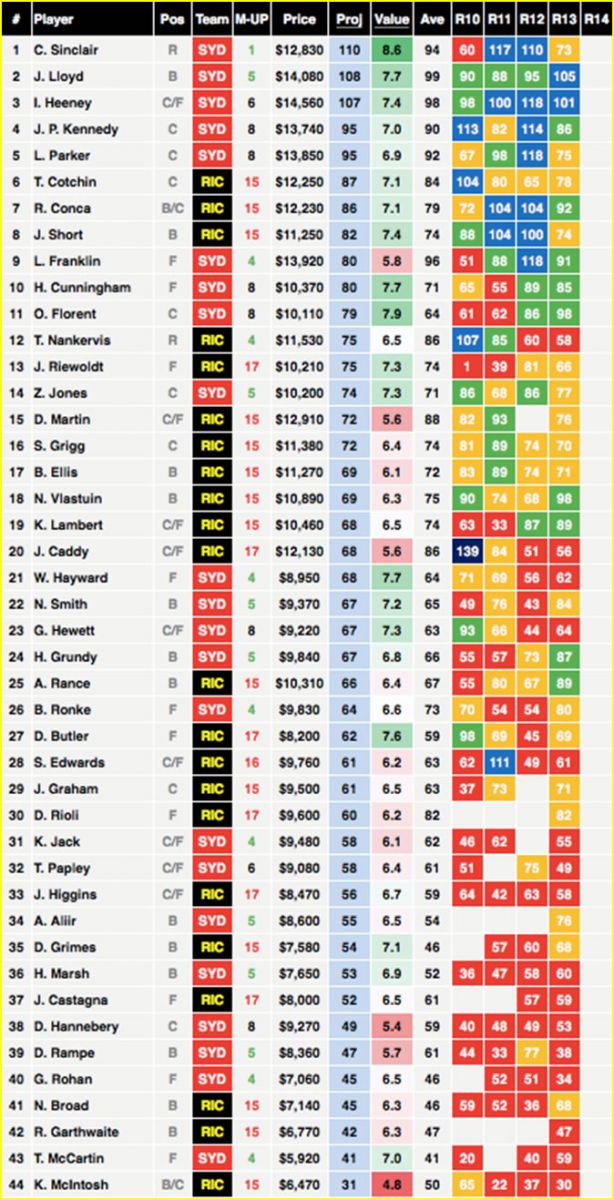 All of the stats and information used in this article has been provided by the team at Fantasy Boss - one of the pioneers for DFS data in Australia. Remember that all projections are merely based off the statisical data provided and we can not guarantee player scores or success in your DFS contests, but we think this information should give you a good head start! Good luck!