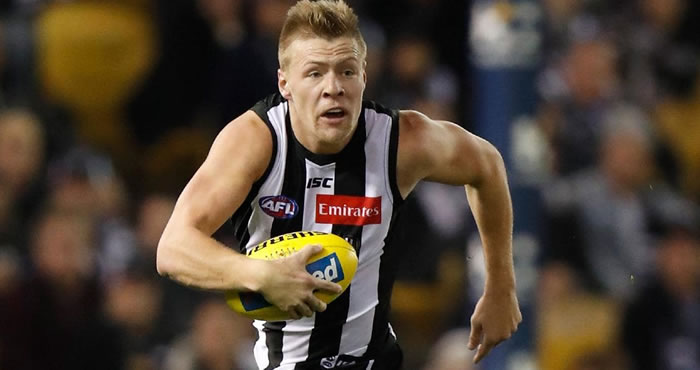 Saturday football has been kicked up a gear this week with Draftstars upping the guarantee of their Saturday AFL contest to a whopping $50,000! Grab yourself a piece of that juicy pie with some AFL fantasy lineup tips from the data kings at Fantasy Boss.

When it comes to a multi-game slate and sifting through the many players to consider, it’s important to target key match-ups within the slate. This match-up overview outlines the difference between what a team concedes for that position and the league average. For example, Gold Coast concede 14.1 more points to opposition mids than the league average and West Coast allow 17.5 fewer points to their opposite ruck in comparison to the league.

The following table looks at the most significant point differentials over the past five games. 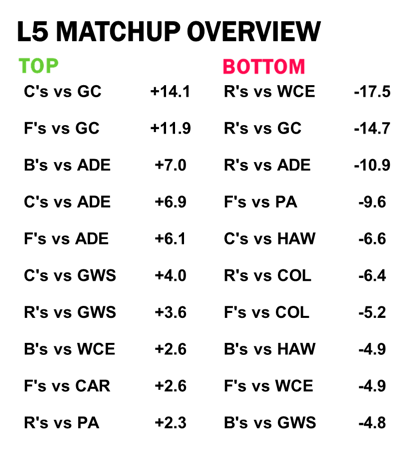 If we take a closer look at the woes of the Suns, we’ll discover that their points conceded to the opposition’s top three scoring mids, produces a whopping season average of 117 and an average of 121 over the last five games. Those numbers are off the charts!

The Suns come up against the Pies on Saturday night, so we’ll look at them to see where the points barrage might come from.

Brayden Sier is set to debut and offered extreme value at a price of just $5,000. He comes into the side in replace of Adam Treloar and described as a big bodied midfielder. Sier has been in the VFL system for three seasons and is ready for AFL footy. Here’s a look at his recent VFL form: 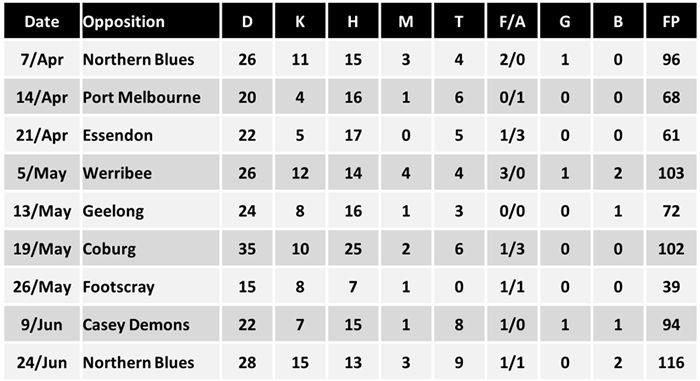 Taylor Adams is a cheaper premium midfielder priced at $13,010 and he will benefit significantly from the soft matchup and absence of Treloar. With increased midfield time due to Treloar’s absence he will be looking to regain his 2017 scoring form which had him averaging a team-high 115.

The only uncertainty that looms is the Touk Miller tag. Miller restricted Tom Mitchell to 84 last week, so while Steele Sidebottom or Scott Pendlebury would normally be looking to feast on this nice midfield match-up there are concerns about the close attention one of them will receive. If you think you know who Miller goes to, get on the other.

The story doesn’t get any better for Gold Coast when we look at the form of the opposition forwards.

Looking at the Points Against graph for forwards, Gold Coast finds themselves in the same position – they are the number one team in conceding points to opposition forwards.

If Collingwood get on top as expected, Jordan De Goey ($12,090) will kick goals. He has the added benefit of increased midfield time recently that has seen him produce scores of 91 and 117 in his two most recent games.

Similarly, Will Hoskin-Elliott ($12,280) is also a big chance to kick a bag with team dominance. His recent form has seen an increase of +12 on his season average, with an increase from 81 to 94 in last five games.

Adelaide’s depleted midfield has been scored on heavily to date and if you look at the Points Against graph for top three mids above you will see Adelaide sitting right in behind Gold Coast. The big question is will the return of Rory Sloane against the Eagles tighten things up?

Luke Shuey has done some bad things to fantasy coaches since his return. He was a late out when owned by 30% of the league, scored only 53 points when tagged by George Hewett and his 73 points last week will put a lot of coaches off. This will reduce his ownership so now is the perfect time for forgiveness and jump on. Shuey was averaging 91 before his indiscretions, so looks set to hit value when priced at just $10,280.

Elliott Yeo has been in great form of late highlighted by a strong road performance against the Swans last week. His tackle count has allowed him to push right into the 100’s and if the trend of scoring versus Adelaide mids continues, expect Yeo to be a strong premium pick at $14,690.

Andrew Gaff is another premium pick at $14,990, and his ceiling (3 x 120+ this year and a 154 recently) makes him difficult to look past. He has been much better on the road this year than previous seasons.

This Saturday slate of games is more about who to avoid in the Ruck division than anything else.

You wlll notice on the match up overview posted above that the top three negative differentials are filled by ruck match-ups. Seasoned professionals Nic Natanui and Sam Jacobs will go head-to head in limiting each other’s output and Jarrod Witts will look to curtail the premium priced Brodie Grundy.

Rory Lobb comes back in to the GWS line-up, however Dawson Simpson remains. This means Lobb won’t see anywhere near as much time around the ball as he previously was.

Andrew Phillips comes in to replace the injured Matthew Kreuzer and you may be tempted by his $8,370 price tag as a number one ruckman. Phillips scored 65 and 77 earlier in the year while filling in for Kruezer. However you need to tread carefully…his 2017 CV doesn’t read as well when he managed just 49 in his only game for the year as Kreuzer’s replacement.

Chad Wingard ($12,630) – Wingard has had a serious increase in mid time over the past three weeks and has produced scores of 121, 124 and 73 in that time. Two out of those three scores return 10x value at a nice salary.