Three games round out Round 16 of the AFL season on Sunday, highlighted by the 3:20pm match between Collingwood and Essendon. Two white-hot teams in arguably the biggest non ANZAC Day clash is recent memory.

Around the Australian DFS sites, Draftstars are running a $30,000 guaranteed contest, Moneyball have a $4,000 Sunday Special, while PlayON are running more qualifiers for their end-of-season $100,000 AFL Super Contest.

The number crunchers from Fantasy Boss are back to give you a helping hand with your DFS lineups this Sunday as they look at the key matchups, important stats and value plays for your teams! 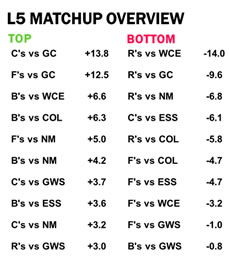 We have been blessed of late with some clear cut ruck options but today we have plenty to weigh up, a lot will come down to your desired team build.

Brodie Grundy is a lock for 100 points every week – he’s achieved that feat for the last 13 matches in a row! It’s just a a matter of how big he goes. Grundy comes up against Tom Bellchambers who is the 12th ranked ruckman in regards to hit-outs conceded to #1 rucks this season. This however won’t mean all that much to Grundy as he has proven his ability against these big ruckmen with 49 hitouts last week on Jason Witts and 38 hitouts against arguably the best ruck in the competition in Max Gawn. Grundy has a season average of 82 points per game from his work around the ground, so if you think he is good for 40 hit-outs, then a fantasy score of 120+ is there for the taking.

North Melbourne enter the game as -49.5 point favorites against the struggling Gold Coast. Over the last five games, the Gold Coast have conceded +12.5 points per game more than the league average to opposition forwards which ranks first by a significant margin. Look to take advantage of Ben Brown’s dual position status as a Ruck/Forward to hit the scoreboard to fill the ruck position in your lineups.

Unlike last season when Vardy averaged 66 points, he is no longer the #1 or even the #2 ruckman at West Coast. As a key forward his scoring potential is limited, however his $5,000 price tag also limits your expectations of what he needs to score. If Vardy can find his way to a 60 he will be hitting value allowing you to go big elsewhere.

Gold Coast - The unenviable leader in Points Against

Despite no Collingwood player going off last week against Gold Coast, the lowest midfield score was 81 with an average of 91 across the board. The Kangaroos against the Suns once again looms as the most favourable matchup of the slate. The North Melbourne mids, aside from Higgins, have far from set the world on fire, however as we saw on Friday night with the Tigers against the leaking Adelaide midfield, certain matchups allow players to exceed their averages and this is what you are chasing in DFS. 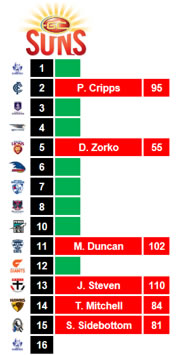 Jed Anderson has been enjoying a break out year playing the majority of games in the Roos midfield. He has a season average of 77 and a last five average of 86 when excluding his injury-affected score in Round 11. At his discounted price of $9,260 at Draftstars and with a soft matchup, Anderson is a strong chance for 10x value.

Paul Ahern at $9,020 is another cheap North Melbourne midfielder to consider. The bloke can find the ball however has been restricted by time on ground. The most game time he received to date was on debut with 77% compared to just 61% and 68% in the other games.

It is worth noting that in his debut game, North Melbourne smashed Brisbane allowing coach Brad Scott to increase his game time. Since then, they have had two losses and a win in the dying seconds. With another comfortable margin expected in North’s favour this week, and up against the light-bodied Gold Coast midfield, a score similar to his debut 92 is on the cards.

Shaun Higgins has been on fire this year playing some unbelievable footy which is likely to see him right up there in the Brownlow Medal count. Based on Gold Coast’s previous tagging behavior this season (pictured right), it is expected that Touk Miller will be paying him close attention. Unless you think Gold Coast will drop the tag this week, Shaun Higgins is an avoid.

Jack Ziebell ($12,120) has been playing predominantly in the forward line this season, with limited time in the midfield, and that has seen his average drop from 94 to 82. With Gold Coast +13.8 to mids and +12.5 to forwards, Ziebell has a favourable matchup whether playing forward or rotating on the ball. Also, with Shaun Higgins set to cop a heavy tag from Miller, it is likely that Higgins spends more time forward which will open the door for more Ziebell minutes in the midfield so he may be worth consideration.

This +1 game style of allowing the opposition to possess the ball in the back half bodes well for Essendon’s Michael Hurley ($13,090). He is consistently Essendon’s anchor behind the ball for setting up switch releases and it shows by his average of 8 marks per game. Earlier this year, Collingwood allowed Hurley to play this role and he racked up 29 touches, 10 marks and fantasy score of 106.

Another who is similar to Hurley who may benefit from this matchup is Brendon Goddard ($13,070). Despite his poor body language, he had himself a day out last time against the Pies with 129 fantasy points. He was allowed to do as he pleased in the back half with 33 disposals and 9 marks, and as a result of the score line back in Round 5, we can’t see any reason why Collingwood would decide they need to put time into him.

Taylor Adams has had a fall from grace this year dropping from an average of 115 fantasy points in 2017 to just 87 this season. With Treloar now out for an extended period of time, Adams has the opportunity to return to his old ways. Already in the one game without Treloar, he registered a score of 101. Last year in the six games Pendlebury missed at the back end of the year (Collingwood losing a main midfielder for comparative sake), Adams stepped up significantly. Hopefully he does the same again starting this week at the nice price for a premium mid of $13,460.

After a rollercoaster of performances for DFS coaches, Luke Shuey finally returned to form last week with 112 points. At $11,950 he is still way underpriced and with a matchup against a slightly-favorable GWS midfield that has only tagged once this year, he has the potential to hit value again with a score in the 100’s.

All of the stats and information used in this article has been provided by the team at Fantasy Boss - one of the pioneers for DFS data in Australia. Remember that all projections are merely based off the statistical data provided and we can not guarantee player scores or success in your DFS contests, but we think this information should give you a good head start! Good luck and gamble responsibly!