A big Saturday slate of games in the AFL this weekend will see Hawthorn take on Brisbane, Melbourne battle with the Bulldogs, GWS to host Richmond and Essendon travel up north to clash with the Gold Coast Suns.

Once again there’s plenty of great AFL DFS contests around the country to get stuck into, highlighted by the $50,000 Guaranteed contest at Draftstars and the qualifiers for the $100,000 Super Contest at PlayON.

Let’s take a look at the key matchups and stats to help you form your fantasy lineups this Saturday.

Runs on the board or Take the value?

Big Max Gawn is in scintillating form with a season average of 115, and a last five average of 119. He has 11 x 110+ scores this year, with five of those exceeding 135+, so his ceiling is high. He now comes up against the best possible matchup for ruckmen against the Western Bulldogs. You might be forgiven for thinking that with Jordan Roughead named, he might provide more resistance in the ruck compared to the pinch hitting Tom Boyd, but it was Roughead in the number 1 ruck slot in Round 11 when Gawn top scored with 141 fantasy points including 57 hit outs!

At the other end of the spectrum is Hawthorn’s Jonathan Ceglar who will find himself as the sole ruckman in Ben McEvoy’s absence. McEvoy last missed a game in Round 23 2016 but you must go back even further to find when he spent extended time on the sidelines. In 2015, Ceglar found himself replacing McEvoy from Round 7-14 averaging a respectable 78 fantasy points during that time with a top score of 114. Those numbers aren’t too bad for a ruckman priced at just $6,840.

Forwards versus the Bulldogs

The Western Bulldogs concede the most points to opposition forwards for the season but it is the Top 3 Scorers against that we have seen this trend really extend over the last five weeks. Just last week, the Hawks top three forwards scored the following:

Interestingly, the Bulldogs vs Melbourne matchup from Round 11 sneaks into this last five stat category and it is much the same reading from that game:

There is no reason Hogan, McDonald and Fritsch can’t go again and they are all similarly priced in that $12-13k price bracket on Draftstars. If you are strapped for cash, Neal-Bullen is a well-known soft match-up lover and there is certainly value amongst Kennedy Harris, Spargo and Garlett.

Gold Coast are the league leaders in a lot of Points Against categories. They are first in the total points against and this has only increased over the last five weeks to a whopping average of 1736 points against.

They lead the way in points against Backs and points against Mids, and they are second for conceding points to Forwards. Thankfully there is light at the end of the tunnel, due to the reliable Jarrod Witts they are well down the list for rucks.

Essendon’s Devon Smith is primed to capitalize on these leaks from the Suns in his mid-forward role. His last five games have produced an average of 110 fantasy points, and he’s coming off a massive 150 points last week. Smith has shown great consistency this year with 13 x 90+ scores and is likely to be highly owned.

Dyson Heppell is nicely priced with an injury-affected 42 still hanging around. Since that injury in Round 12, Heppell is averaging 106 so he’s certainly worth consideration.

Kyle Langford has found himself in the midfield rotation at the Bombers and his price presents great value with this extended time around the ball.

Zach Merrett looks likely to cop what will be his fifth tag for the year. Averaging just 89 when tagged in 2018 and with Miller/Sexton’s scalps in recent weeks, Merrett looks unlikely to hit a score warranted for his premium price tag. 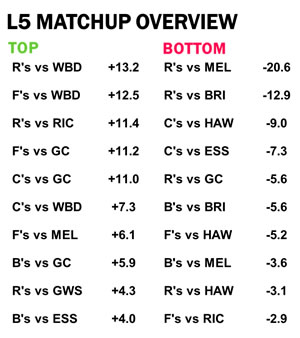 JKH has been named for his first game of the year but, in a strange pricing quirk, comes in at $6,400 rather than the basement $5,000. He averaged 62 from six games last year and achieved 64+ in four of those games - scores that would see him going for 10x or above at his current price.

Colyer is certainly due and the stars could be aligning for DFS coaches this week. A pitiful 24 last week has brought his price right back to square one, the basement $5,000. But why get on him now? Firstly, the softest of soft match-ups awaits against Gold Coast which is just what a speedy wing-forward needs to build some confidence. Secondly, you get an added bonus of reduced ownership due to burnt DFS players not willing to go again on him. And lastly, with two games under his belt now he surely becomes closer to returning to his full capabilities that saw him average 68 in 2017.