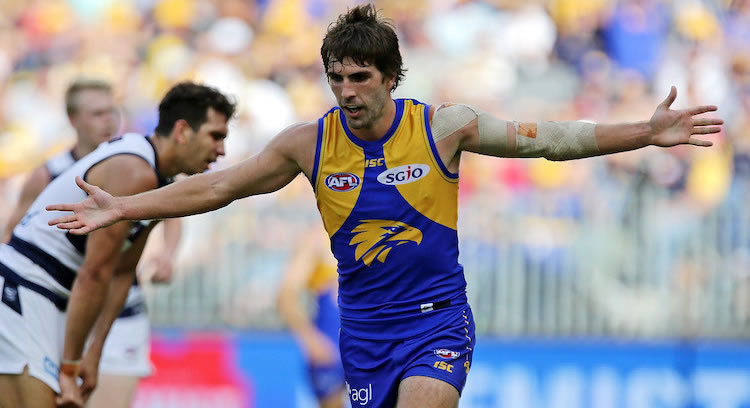 Round 17 of the 2018 AFL season wraps up on Sunday with three big matches that will be crucial to finals chances for some teams. All eyes will be on the MCG with the Pies and the Eagles doing battle for a top two spot, while across the road at Etihad the Roos will be wanting to cement their spot in the top eight against the Swans. The final match of the round sees Fremantle host the Power.

Our number crunchers from Fantasy Boss have been taking a close look at the matchups and have found some more gems for your DFS lineups this Sunday! There are plenty of great contests around with a $30,000 Guarantee at Draftstars and qualifiers for the $100,000 Super Contest at PlayON.

Sean Darcy at $5,920 is still an absolute bargain and this week he has a better matchup than last week’s tough ask against Max Gawn. Had 24 hitouts and 60 fantasy points against the league’s best ruckman last week in his first game of the year, sharing the time on ground with Michael Apeness who has been omitted this week. Darcy is yet to play a game of AFL football where he hasn’t hit 10x value at his current price so he should be a lock for your lineup.

Port Adelaide vs the favorable Fremantle

The softest matchup in the slate is Fremantle who are ranked second overall for Points Against this season and third overall for the last five matches. Optus Stadium will play a small role in helping the Dockers, who are again without Sandilands and Fyfe, however Port Adelaide stacks are worth a play.

Chad Wingard
Somehow with a last five game log of 121, 124, 73, 102 and 106 – Chad Wingard dropped in price this week to just $11,930. His role in the midfield has seen his scoring and consistency improve significantly this season and he has every opportunity to score 100+ again against the fifth-ranked Fremantle midfield.

Tom Rockliff
Tom Rockliff has bounced back from a poor start to the year with a last five average of 101. Rockliff was back to his best last week hunting those +6’s in the back half that have helped him amass monster scores throughout his career. Fremantle who rank second overall for Points Against to backs for the season will allow Rockliff to feast on these extra numbers if he wants them so he’s worth consideration at $12,730.

Ollie Wines
After being tagged for 69 last week by Jack Steele, Ollie Wines comes into the game underpriced at $13,360. He has performed much better at Adelaide Oval than on the road this season, however in a soft matchup and underpriced, he has strong potential to hit value.

According to the DFR Fantasy Boss matchup rank, Collingwood are currently ranked number one for Backs. Whilst the raw Points Against data suggests Collingwood are mid-table, when taking into account the lowly opposition they have played and the scores conceded to them, the DFR Fantasy Boss matchup rank attempts to minimize the impact fixturing has on the numbers. Collingwood have played the bottom 7 teams on the AFL ladder in the last 9 weeks!

With this in mind, the door certainly opens for some WCE backs to cash in on this. The obvious choices here are Shannon Hurn and Brad Sheppard, however one to consider is Jeremy McGovern at $9,660. Having played forward the last few weeks, his scores have dipped significantly. With Josh Kennedy, Jack Darling and Mark LeCras all back into the side, McGovern will return to his intercepting role across the half back line that bodes well for fantasy scores.

Andrew Gaff has been in unbelievable form of late with back-to-back monster scores against the second and fourth ranked sides for Top 3 Points Against to mids. This week against Collingwood, who rank third in that particular category, the only thing that could stop Gaff here is a run-with role. Collingwood’s reluctance and past history of minimal tagging bodes well for him. With Darcy and potentially O’Riordan or Moore in your side, Gaff’s price tag of $16,950 is certainly manageable.

Colin O’Riordan ($6,400 Defender) is the Tadhg Kennelly 2.0 - a Gaelic Football convert who has been winning the ball across half-back for the Swans NEAFL side. He has averaged 29 touches this year highlighted by his monstrous performance last week against the Giants reserves with 39 disposals, 12 marks and two goals.

Alex Morgan ($5,000 Defender) was drafted by Essendon in 2015 before making his way over to North Melbourne. At 22 years of age, he’s certainly not a kid and his VFL numbers have been relatively solid for the cheap price tag. 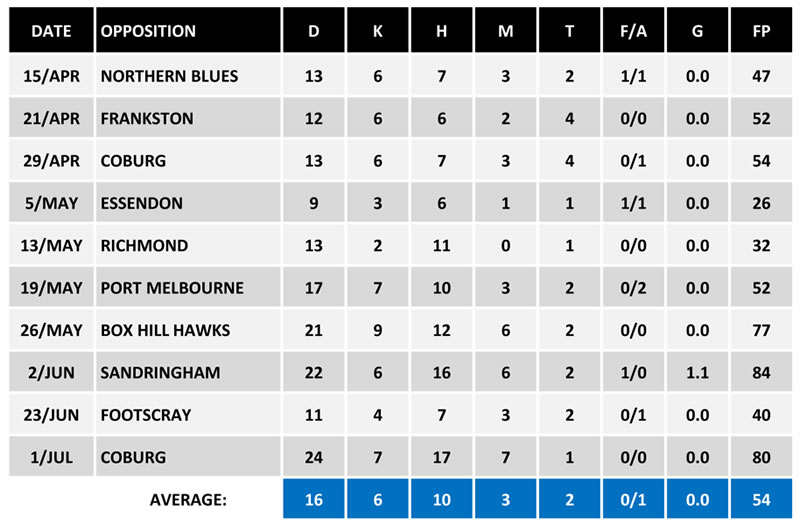 Darcy Moore returns for the Pies and is a value option that will be chased hard by DFS players at $5,700, and rightfully so. Over his career he has had plenty of scores to his name that will provide strong value at this price. This year he has an 86 to his name from a strong Round 1 outing, but also a poor 28 against Brisbane in Round 7 which shows the risk and reward of him as a play. From his two injury-affected games this year, he has scores of 36 and 17 from 50% and 20% time on ground respectively.