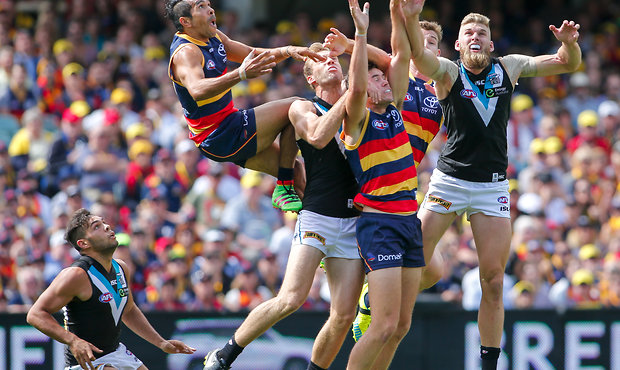 The AFL Saturday slate for Round 20 sees the Hawks host the bombers, Lions play the Kangaroos, Crows and Power battle in the Showdown, Saints take on the Bulldogs, and the Swans duel with the Magpies.

There are plenty of great AFL DFS contests around the country to get stuck into, highlighted by the $50,000 Guaranteed contest at Draftstars and the qualifiers for the $100,000 Super Contest at PlayON.

Thanks to Fantasy Boss we've got your DFS teams covered with all the best plays for each game detailed below.

Essendon have the honour of being the hardest team to score on in the past 5 weeks, giving up an average of just 1425 total points. On top of this, the Hawthorn midfield who has been red hot of late is facing the toughest match-up across the board. They may struggle to score bar the ever reliable Tom Mitchell.

Tom Mitchell will now take up more than one fifth of your salary and with his push through the $20k barrier he will need to score well beyond 150 to be of any sort of value. The most ridiculous thing is that this is actually fairly realistic for Mitchell even considering the above mentioned match-up. He has a last 5 average of 159 and 9 x scores of 140+ this year. Mitchell’s selection, at his hefty price tag, is easily do able with the plethora of cheap options available to pair him with.

Be wary of the form Luke Bruest finds himself in. Don’t get us wrong, he is a super player whose role and work rate allows him to gather possessions up the ground and also kick goals which is very fantasy friendly. However, he’s played the top 5 easiest teams (GC, WBD, Bris, Carl, Freo) to score on as a forward in the last 6 weeks, resulting in his average over this time sky rocket to 104, which is +16 on his season average. Unfortunately, this week Bruest faces the 3rd hardest match up for forwards.

Aaron Francis is worth another look following his 59 points first up last week. With a favourable match-up he should push 10x value again.

Dayne Beams and Dayne Zorko might be fighting it out for top scorer within this game. In their two most recent games, North Melbourne has allowed one midfielder to really get a hold of them, with Elliot Yeo scoring  136 last round and Taylor Adams 135 two weeks ago. Interestingly, it was both Beams and Zorko who inflicted the pain back in Round 11 going for 137 and 128, respectively.

Forwards continue to score well against North Melbourne; last week it was Cripps who racked up a lazy 106 despite a 40 point defeat. Unfortunately, there is not many that scream ‘pick me’ within Brisbane’s forward line but Allen Christensen looks some value, as his price has dropped on the back of some fairly average form of late (last 5 average of 61).

Showdown 45 offers up a nice opportunity for the big sauce Sam Jacobs. At just $10,740 you are getting a solo ruckman that is coming up against a ruck match-up that has conceeded 3 x 100+ scores in row, including 120 points to makeshift ruckman Jackson Trengove last week.

There’s a plethora of under-priced stars who should lift for the big occasion in this game. Jared Polec has a last 5 average of 95 and is coming off 4 x 90+ scores, three of which were 100+. Ollie Wines last three scores read 118, 101, 101. Chad Wingard’s price still doesn’t match his increased midfield minutes (last 5 averaged of 98) and Rory Sloane is still down there at $12,260.

Jasper Pittard looks to be back relishing his role off half back. In his two games since returning to the team he’s averaging 89. Over this same period, rookie Jarrod Lienert has passed the eye test on his way to scores of 79 and 72.

The Bulldogs continue to leak points, at 1705 Points Against they have the second highest average over the last 5 games.

Forwards playing against the Dogs have been the biggest beneficiaries of this, especially the top three scorers, who are averaging  a whopping 100 points! Both Jack Billings, who has a last 5 average of 92, and Jade Gresham (Last 5 of 84, which is +12 on season average) find themselves in form and in a perfect role that sees them roaming both the wing and forward line. Jack Lonie has back to back 80+ scores and David Armitage returns to what could be a juicy mid/fwd role that saw him go for 96, 110, 105, 110 in recent times.

Nathan Freeman will make his long-awaited debut for the Saints and for many DFS coaches no doubt. Drafted way back in 2013 by Collingwood, the midfielder has suffered many setbacks but has earned his selection on the back of great VFL form. He’s had 3 x 100+ games in a row and an average of 95 across seven games since returning from injury. Interestingly, but not surprising considering Draftstars' fickle pricing model, ‘Freeza’ will set you back $7,000.

Brodie Grundy has a favourable match-up that has seen some big scores for dominant ruckmen, such as Witts (132), Goldstein (125), Nankervis (131) and Stef Martin (137). Sydney’s last 5 average points against to ruckmen is creeping off the graph!

Jack Madgen and Alex Johnson will go head to head as basement priced players. Madgen, a former basketballer, will be tasked with filling Jeremy Howe’s intercepting role down back, while Johnson returns to the fray some 2136 days since his last AFL game.