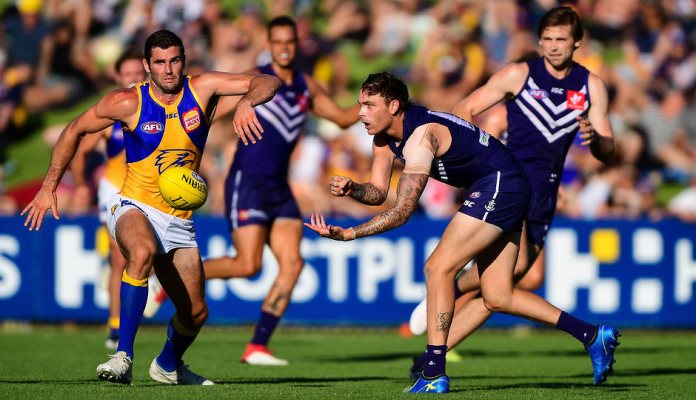 Round 20 of the AFL Sunday slate will see a rather lopsided clashes between fifth-placed GWS Giants and the last-placed Carlton, Melbourne who are sixth on the table will play the second-last Gold Coast Suns and then second-placed West Coast will play the 13th place Fremantle in a local derby.

If you’re looking for AFL DFS contests, then be sure to check out the competitions regularly running at Draftstars and also over at PlayON. There's a $30,000 guaranteed contest at Draftstars, and qualifiers to a $100,000 Super Contest over at PlayON.

Thanks to Fantasy Boss we've got your DFS teams covered with all the best plays for each game detailed below.

Clayton Oliver and Angus Brayshaw come up against the top ranked midfield match-up in Gold Coast. Last week Cripps (162) and Murphy (139) both went off against the Suns and in the two games prior it was much the same with Josh P.Kennedy (134) and Zach Merrett (138). On top of all of this, the Suns go in without regular midfielders David Swallow and Jarryd Lyons.

And coming in at third place in the favourable midfield match-ups is Carlton, so look for the Giants to get a hold of them here. Josh Kelly and Stephen Coniglio are your premium priced picks and rightly so with season averages of 112 and 109 respectively. Callan Ward is a price bracket lower due to being tagged last week for 73. Ward won’t be tagged ahead of the aforementioned Giants very often and previous to that he was in red hot form.

Forwards vs Fremantle and Carlton

Understandably so, keeping in mind their seasons to date, forwards vs Fremantle (+11.4) and Carlton (+10.0) come up on our overview radar. This +/- data outlines the difference between what a team concedes for that position and the league average.

Last week against Fremantle, Luke Bruest scored 108 and in the previous week it was Orazio Fantasia scoring 116. Look for Patrick Cripps to do well, he’s in soft match-up bullying form having scored 101 against the Bulldogs and then following it up with 106 against the favorable Kangaroos.

With regards to Giants players against Carlton, Toby Greene could finally be primed with three games under his belt now. At just $10,410 he will be highly owned again this week. Jeremy Cameron also returns for his first game in 5 weeks.

Defenders playing against the Gold Coast Suns also comes up favourable at +9.2. The Suns have conceded the most points on average to all defenders across the year and also in the last 5 games. They concede the most points to the top 3 scoring backs and have recently extended that to the bottom three scoring backs. So basically everyone is in play here! Jordan Lewis has an average in his last 3 games of 93, a healthy 12 up on his season average while Christian Salem has strung together 4 good games in a row across half back, averaging 84 in that time. Last time they played was in Round 8 this year, where Lewis went for 97 and Salem racked up a season high 119!

To round out the feel good stories for the weekend, that has included the return of Alex Johnson and debut of Nathan Freeman, we are treated with the $5000 Aaron vandenBerg returning after almost two years on the sidelines. The Melbourne Demon has averaged 90 in his VFL preparation and it is his tackle counts of 16, 8 and 10 in the last three games that is most impressive.