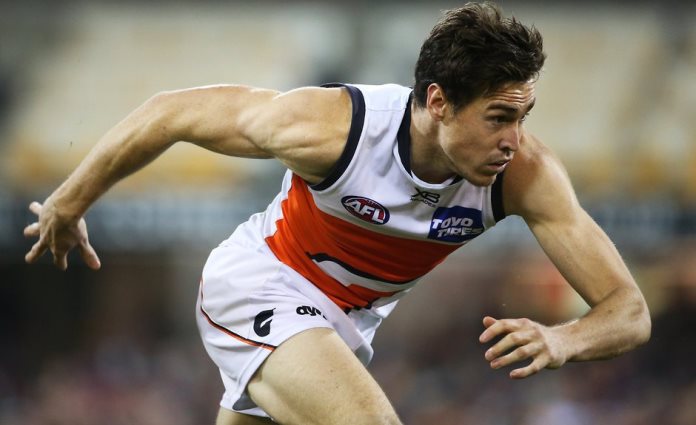 At DraftStars they have a $30k tournament which costs $15 to enter, while over at PlayON they are running qualifiers to enter into their $5k Grand Final contest. Head on over there now to be a part of the action!

Interestingly enough, based on who they have played and the points conceded to them, the Demons are the #1 DFR Fantasy Boss matchup for midfielders. In the Sunday Slate this bodes well as they are up against a GWS side that has the ability to cash in on this. Note: with James Harmes tagging 4 times in the last 5 weeks, you would expect him to go to Josh Kelly. The tagging spread of Giants players so far in 2018 is Kelly 2, Callan Ward 2 and Dylan Shiel 1, however in 2 out of the 3 times Ward and Shiel received attention, Kelly didn’t play. With hopefully a narrowed down target for the Giants, we can start to look at what is left that is favorable.

Stephen Coniglio in this matchup at the price of $14,650 is great value. He is one of the most consistent options available with the ability to go big; averaging 108 on the year with just 2 scores under 92 from 21 games.

Despite not being your traditional midfielder, Lachie Whitfield’s hard running style of footy across half back and through the middle of the ground should position him well to put a big score together.

Dylan Shiel has hit form over the last couple of weeks. With back to back scores over 100 and priced at $12,760, he is every chance to produce high end value.

On the other side of this matchup we have Clayton Oliver up against a GWS side that generally don’t tag (Dayne Zorko Round 6, Rory Sloane Round 21). So far this season he has been tagged a total of 5 times (Rounds 3, 14, 15, 21, 22) for an average score of 93 in those games. When removing his tagged scores in the back half of the year, Oliver is averaging a massive 126. If the Giants are willing to let Oliver go head to head, I would be very interested in chasing a 130+ score.

With a +5.6 differential over the last 5 weeks, St.Kilda rank 4th overall for points against to forwards. This opens the door for players such as Jarrad Waite, Jack Ziebell and Jed Anderson (mid/fwd) to come into play. Other then Jed Anderson, consistency has always been an issue with the other two, however if you are going for the #1 spot you need to take risks on yo-yo type players. I expect this game to be a shoot-out considering the dead rubber nature of the game and this trend to continue.

North have been one of the most fantasy friendly teams for points against over the last 5 weeks 2nd only to Gold Coast.  This was highlighted last week against Adelaide when they conceded 12 scores of 91+. Over this time they have worked their way to the number 1 matchup for top 3 mids over the last 5 weeks, conceding a huge average of 118 points per game.

On this basis I would be willing to back in any of St Kilda’s best scoring mids based on your team needs.

If you have the salary for him, Seb Ross has the ceiling you are after with scores of 160 and 143 in his last 3. In addition to this, he loves Etihad Stadium!

Jack Steven is the value pick at $12,470. He has a high floor this week around 90 so if you think he will finish the year with a bang, he will provide strong value.

With so many nice mid matchups available and difficulty fitting everyone in, Jack Billings is a forward on Draftstars that plays a mid / fwd role who would be favorable against North Melbourne.

Allen Christensen’s last 3 form has been what we expect from a strong fantasy performer in previous years. With scores of 80, 93 and 108 in this run of form, at $10,630 he has the opportunity to strike 9-10x value.

I continue to ignore the scoring of Jamie Cripps however his game log speaks for itself.

He has only 2 dud scores in his last 9 games and with everything on the line for the Eagles this week, he provides a high end value pick $12,830.

At the cheap price of $10,710 Dom Sheed with a key role now in the midfield is nice value. His scores of 78 and 120 in his last 2 games show that he is trending upward on his now season average of 74. It’s a shame he is no longer available as a Forward.

Rory Lobb is still nicely priced for a number 1 ruckman however coming up against Max Gawn rules him out for mine.

Stef Martin broke a poor 3 game slump to bounce back with a big 122 vs Jarrod Witts. Whilst the Eagles are currently matchup ranked 16th for points against to rucks, most of this stingy work was done back with Nic Naitanui. This is highlighted by the differential of their season average of 78 compared to their last 5 average of 94. I really like Stef in this one at the value price of $13,150.