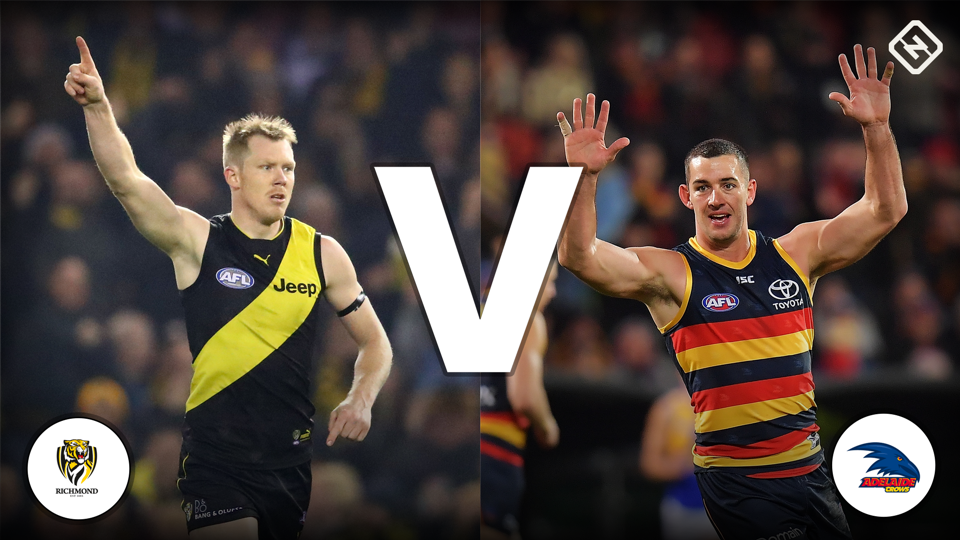 Round 16 of the 2018 AFL season continues on Friday Night with a Grand Final rematch between Richmond and Adelaide at the MCG. The Tigers will be looking to keep their unbeaten run at the ‘G alive, while the Crows are hoping to string back-to-back wins together for the first time since Round 7.

As usual, DFS sites across the country have provided us AFL fantasy enthusiasts with some massive contests to indulge in for Friday Night’s Tigers vs Crows blockbuster. Moneyball have a $5,000 Guaranteed Special, PlayON are running qualifiers to their $100,000 Super Contest, while Draftstars have a massive $30,000 Guaranteed contest.

Once again the boys at Fantasy Boss have crunched the numbers to help give you the edge when selecting your DFS lineups. Check out the best plays for you this Friday!

Battle of the Bigs

It’ll be an interesting matchup in the centre of the ground with both ruckman (Nankervis and Jacobs) essentially the same price with averages in the mid to high 80’s. However, after looking a little deeper we’ve found that there is a significant differential between the two sides in terms of ruck points against. In 2018, Richmond are conceding an average of 102 points per game (2nd) to the oppositions number 1 ruck, whereas Adelaide have conceded 80 PPG (14th), with a drop to just 71 PPG over the last 5. Further, last time they played Jacobs ($12,790) won the hit out battle 40 to 25 and overall fantasy points 120 to 98, which is Jacobs top score for the year. In addition to this, in last year’s Grand Final Jacobs dominated the hitouts 49 to Nankervis' 28. After looking at the data we recommend taking Jacobs’ high floor and ceiling due to this hitout domination; opposed to relying on Nankervis ($12,520) to have a huge game around the ground.

We spoke about this matchup in last Saturday’s slate and the trend of heavy scoring on Adelaide’s midfield continued, highlighted by Gaff’s 148 and Shuey’s 112. With the lack of defensive running from Adelaide’s engine room It’s well worth having a look at a number of Richmond midfielders.

Despite a poor average of 88 for the year, Dusty looks set to cash in on this favourable matchup. He showed glimpses of last year’s form on his way to 90 with Hewett hanging off him last week and at his price tag of $13,170, his potential ceiling has him primed for fantasy selection.

Dion Prestia is still underpriced at $11,830. He had a 92 on return last week and before injuring himself back in Round 7 he was on track for a big game with 70 points from just 50% TOG. He’s shown in the past that he’s more than capable of being a huge fantasy scorer and it seems there’s no better week than this week to take a punt on him.

Richmond chose not to go with a genuine midfielder at the selection table in place of the injured Reece Conca, which means it’s likely that Jack Higgins will continue the midfield role he played for the majority of last weekends match. A role further up the ground saw Higgins gain career highs in kicks, handballs and marks and a fantasy score of 73. At $9,000 Higgins could prove to be a great selection.

Matt Crouch definitely comes into Round 16 well underpriced at $13,970. He’s one of the premier midfielders of the competition and is up against the Tigers, who are neutrally ranked for points conceded to opposition midfielders. On Top of that, he’s scored 90+ in all but one game this year and is coming off a huge 120 last weekend. His recent history against the tigers is also very promising. Last year he scored 122 against the Tigers in R6, 124 in the Grand Final and was on track for another big one earlier this year before injury struck early in the second quarter, where he had 33 points and 13 disposals from just 23% game time.

Richmond is currently the only team that hasn’t tagged an opposition player for the entirety of the 2018 season. This is great news for Rory Sloane, who was tagged a league high 13 times in 2017 and has now received attention in 2 out of his 5 games so far this year (including his first game back last week). With a bit of freedom come Friday night, expect Sloane to cash in on his $12,200 price tag that's heavily influenced by injury and opposition attention.

Short is a great price at $11,430 considering he’s now Richmond’s go to for launching attacks from the backline. His fast pace and precision kicking has seen him fill this picture perfect role for fantasy scoring that has his team mates getting the ball to him at all costs. He has a last 5 average of 92, which is a +17 increase on his season long average.

Laird will be filling the exact same role at the opposite end of the ground. However, the fact that he’s been doing it for years and is a proven premium means he'll set you back a hefty $15,560. This is where it's interesting to take a look at the use of value. Whilst we actually have Laird projected to score higher than Short, his price tag has him scoring at a value of 6.9x in comparison to Short’s 8.9x which comes in second highest for this game.

The cheat sheet below gives you everything you need to know to help you build your DFS lineups for Richmond vs Adelaide on Friday Night. 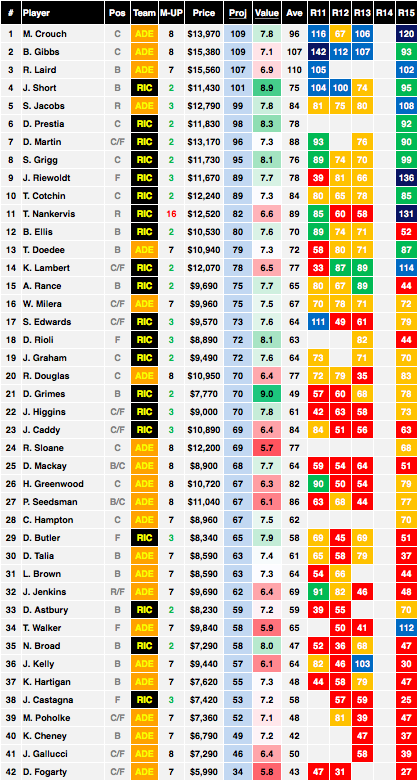