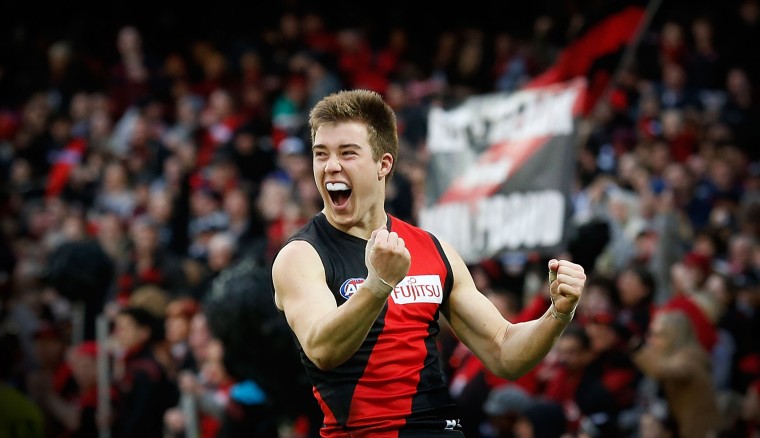 Round 21 of the 2018 AFL season commences on Friday night with the Bombers hosting the Saints at Etihad Stadium. The Bombers must win and win well against the Saints to keep the slimmest of finals hopes alive, while the Saints are hoping to deliver a solid performance in their fourth and final Friday night match of the season.

DFS sites across the country have provided us with some more great contests for Friday night. Draftstars have a huge $30,000 contest on, Moneyball have their own $5k tournament, while PlayON are running qualifiers for their $100k end of season Supercontest.

As they always do, Fantasy Boss have crunched the numbers to provide you with some great tips for your fantasy teams, so check out all the best plays for Friday night's match below.

Tom Bellchambers finds himself having a solid year and has been in good form recently. He’s having his third highest season average of his 10 year career and a has a last 5 game average of 86. Importantly, he hasn’t dropped below 75 points in his last 7 games.

For the Saints, Lewis Pierce will replace the injured Tom Hickey. Pierce will play only his second AFL game after debuting back in 2016. Last week in the VFL, Pierce had 14 disposals, 6 tackles, and an impressive 54 hit-outs. At $5K those Hit-outs alone represent value, although they won’t come as easy on Friday night against Bellchambers.

There are three players that find themselves above the $15K mark:

Zach Merrett is in scintillating form with a last 5 average of 121 and 9 x 100+ scores in his last 11 games (the other two games produced 99 and 98…). However, Merrett will most likely receive attention from Saints tagger, Jack Steele.

Devon Smith also finds himself in serious form. His last 5 average is 117, which is +14 on an already impressive season average of 103.

Seb Ross comes up against the team that Top 3 midfielders have found hardest to score on fantasy wise in the last 5 weeks, and you’re also paying up considering his 160 last week. However, Seb Ross averages 116 at Etihad Stadium this year, including scores of 160, 132, 123, 121, 121.

Keeping in mind that we have the 5th best midfield match-up against the 18th with an 11.4 points against differential between them, some other bombers to consider are:

Dyson Heppell has sat at $14k all year. Never gets tagged ahead of Merrett, plays 100% of time in the midfield and has a great floor/ceiling combo that seems him averaging 101 for the year.

Before injury struck, David Zaharakis was averaging 109 across the first 10 games. He has three games back under his belt now and should be looking to hit that form again against this match-up.

In the last three weeks we have seen dashing half backs cash in against St Kilda.

Essendon has a plethora of these so take your pick:

Adam Saad and Conor Mckenna certainly fit the bill as dashing half backs, but they aren’t necessarily Essendon’s regular high scorers in comparison to the three players outlined above. This is where DFS coaches can look to exploit the match-up and find a value pick that may be lesser owned than some of the big names. The guys that you’re looking for are in the mould of Brendan Goddard and Andrew Mcgrath, who are both out of form with last 5 averages of 68 and 66, respectively, and are carrying reduced prices and could be primed to bounce back here.

Along with Lewis Pierce, we have another $5k option up for grabs with confirmation of Ben Paton making his debut for the Saints. Paton was drafted at No.46 in 2017 and has been named an emergency on 10 occasions so he’s certainly carrying prolonged form in to the game. Described as both an inside and outside player with elite skills the Saints will be looking to get the ball in his hands on the fast Etihad deck.

The cheat sheet below gives you everything you need to know to help you build your DFS line-ups for Essendon vs St Kilda on Friday Night. 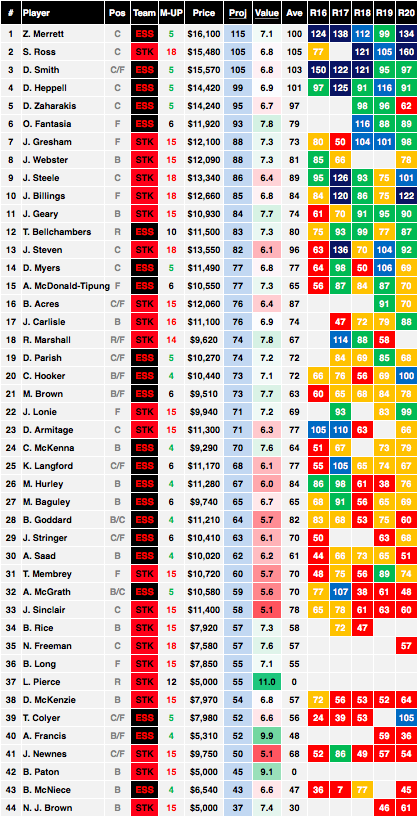