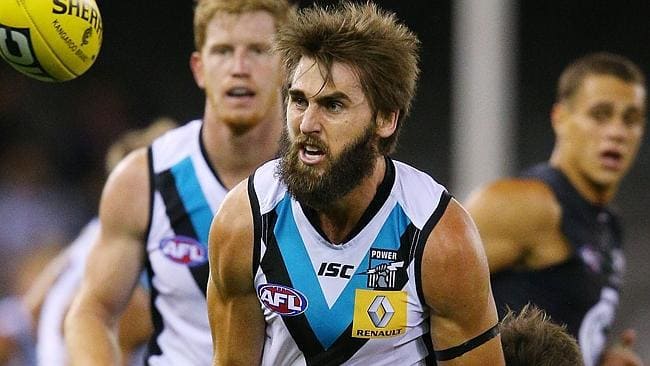 Round 23 of the 2018 AFL season kicks off on Friday night with Port Adelaide hosting Essendon at Adelaide Oval. The Power will be looking to hold their end of the bargain to keep their finals hopes alive, while the Bombers will be trying to finish off their disappointing season with a win.

PlayON continue to host great contests and this week is no different. We are lucky enough to have another DFR exclusive contest that costs just $5 to enter! The top half of the field will all double their money, while the winner will be awarded a free ticket to the guaranteed $5,000 Grand Final contest!

- 1st place will receive a free entry into the $5,000 AFL Grand Final guaranteed game as an added prize


As always, Fantasy Boss have crunched all the numbers to help you prepare your Friday night fantasy teams. Check out all the best plays below.

Port Adelaide find themselves in the enviable position of having conceded the fewest fantasy points per game across the whole year (1503). Unfortunately though, their 3 game losing streak and losing 4 out of the last 5 hasn’t done wonders to this average. Over the last 5 games they have conceded 1578 points per game, a number that would put them 8th on the season tally. Over this period they have also conceded the 2nd most 100+ fantasy scores per game (4.4). Essendon are quite the opposite in recent times. Over their last 5 games they lead the league in fewest points against per game (1449) and fewest 100+ scores (1.8).

Probably not. In fact, many will be asking who Billy Frampton is. The WA product will play his first game for Port after being drafted some 4 years ago and will share the ruck duties with Paddy Pyder. Ryder, who has been noticeably battling injury issues, has conceded some juicy numbers to his ruck counterpart in recent times. Scores from Grundy (147), Lycett (114), Trengove (120) and Simpson (109) have Port Adelaide conceded the most ruck points across the league in the last 5 games. To throw a spanner in the works, Essendon’s number 1 ruckman Tom Bellchmabers has been ruled out with injury, so who cashes in here? Look out for Leunberger to be selected and at just $6,620 he will well and truly be in the frame for many DFS coaches.

The battle of the midfielders is always heavily scrutinised, and for good reason considering they take up 4 slots of your 9 man team and often more when we sneak them in under dual positions. Points Against tells an interesting story. Across the season, Port has only conceded two more points than Essendon to midfielders per game. However, over the last 5 weeks this has increased to a 10 point differential.

Zach Merrett is priced accordingly to his 111 last 5 average. He's in great form and was still able to will himself to 93 in what was a quiet game last week.

Devon Smith has the highest season average for the Bombers at 105. His last 5 average is 111.

With tough match-ups presented across many areas there is a lack of value to pick from in this match.

Billy Frampton will be popular at $5k but sharing the ruck duties will not be overly enticing for many DFS players. We saw Darcy Cameron from Sydney come in with huge numbers behind him, only to score 27 performing similar duties with Sinclair.

Jasper Pittard is our highest value projection for players who have been playing regularly but he is the perfect example of the aforementioned tough match-ups. He comes up against the 18th ranked team to score on as a defender and with a projection of 8.2x value topping our list you see how tough it is out there.

The cheat sheet below gives you everything you need to know to help you build your DFS line-ups for Port Adelaide vs Essendon on Friday Night. 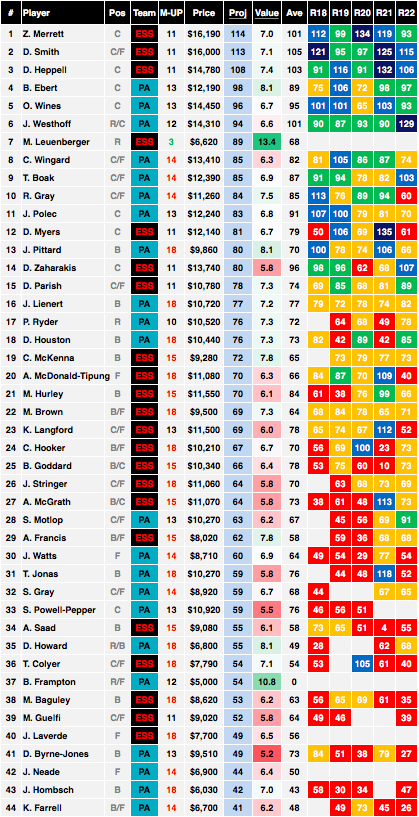