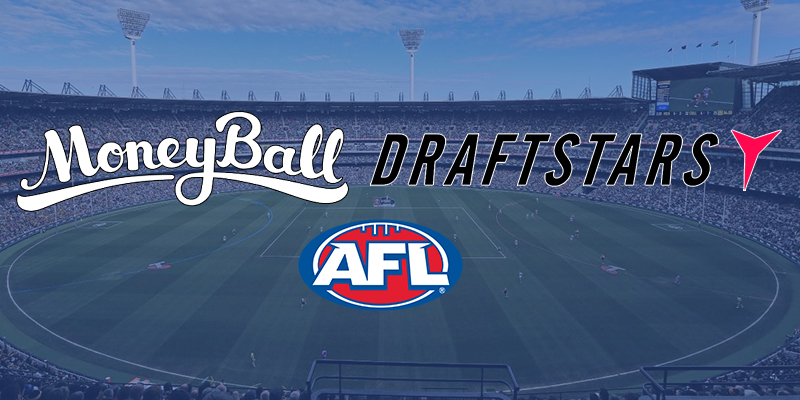 With the increased AFL prize pools on offer this week, some players may be jumping into the Moneyball lobby for the first time to tackle their $50,000 Guaranteed contest this Friday night. If you are new to the software, there are a few subtle differences in the way the Moneyball software and strategy works compared to what you may be used to at Draftstars. So we thought we’d put together this simple guide to point out some of the key differences that you may like to be aware of before you jump into the action this weekend.

The most noticeable difference between Moneyball and Draftstars is with pricing and salary cap.

On Draftstars you are given a Salary Cap of $100,000 and typically players will range from the bargain basement price of $5,000 up to the elite players who can be priced around $17,000 or perhaps more.

When you login to Moneyball, you’ll see things are a little different. You need to work with a salary cap of just $60,000, but you’ll find players are priced differently. Cheap players will start at $3,500 while the elite players will be around the $10,000-$11,000 mark. Just like on Draftstars, you’ll find some players offer good value and others not. Simply use our Moneyball AFL Resources to work out the value of the players relative to their price to determine if they are a good pick for your lineups.

Draftstars list some players in multiple positions, otherwise known as dual-position players. For example, Essendon’s Joe Daniher can be picked as either a Forward or a Ruck.

On Moneyball, you’ll find that there are no dual-position players. Everyone is assigned just one position. However Moneyball does offer a “Flex” position – see below.

Draftstars provide for four mids, two forwards, two defenders and a ruckman for a total of nine players.

Moneyball is similar in that there are nine players, but the composition is a little different. You get to pick three mids, two forwards, two defenders and a ruckman, but the ninth position is a “Flex” position which allows you to pick any player from any position to complete your lineup. So you could take a fourth mid, and your lineup would be very similar to one on Draftstars. Or you could try other strategies to see what works such as playing an extra forward, or picking two ruckmen.

The way that players earn points in matches is the same for both sites, and since both sites have nine players, you’ll find that winning scores will be pretty similar. There are obviously slight variations due to the different salary/pricing system and also the use of the Flex position on Moneyball.

Usually a score of around 900 will see you among the top finishers at the end of the day, and that’s a good score to aim for. To achieve that number, you’ll need an average of 100 from all nine of your players.

On Draftstars that means you’ll need everyone to hit 10x their price to hit “value”. But with the different salary on Moneyball, you’ll need a return closer to 15x their price to reach that same mark. So keep that figure in mind when you’re constructing your lineups.

It’s interesting to compare the payout structures for both Moneyball and Draftstars this week given both are promoting $50,000 prize pools.

The payouts are pretty similar, although Draftstars has a slightly flatter payout structure. Draftstars have just under $5,000 for first, almost $500 for 10th and a min-cash all the way to 978th place. Their payouts are tapered quite well all the way down through the payout levels.

Moneyball is a little bit more top heavy with $6,500 for the winner, and a significant drop to next best. The top 9 get $550, but it’s another steep drop to 10th place who gets $270. A min-cash on Moneyball is over double the buy-in which is more than Draftstars, but payouts only extend to 897th place.

Finally, there is a neat feature in the search facility on Moneyball which was shared to us by JayK123 in the recent DFR Podcast. This feature allows you to search for particular game day players and check which teams have those players. Find out more in the DFR Podcast below: