There 2018/19 EPL season resumes this weekend with some big games set to play out. As usual, we’ve provided our fantasy team of the week to help you make the right selections. Good luck to everyone entering!

There’s the usual six-game slate on this Saturday night with matches starting from 2am-4:30am. The feature matches include: Brighton and Hove Albion vs Liverpool, Burnley vs Fulham, Cardiff City vs Huddersfield Town, Crystal Palace vs Watford, Leicester City vs Southampton, Chelsea vs Newcastle United.

Alisson (LIV $5,700) – Alisson has kept the most clean sheets of any team in the league this season and comes up against a far inferior team this weekend in Brighton. We have the Reds proving very hard to score against once again.

Robertson (LIV $5,800) – The first picked defender in our team this week is Andy Robertson. He’s turned into arguably the best left back in the world and will have plenty of attacking movements against Brighton.

Maguire (LEI $3,800) – We’ve gone cheap in defence with Harry Maguire from Leicester. The England international is a rock in defence and should be keeping a clean sheet against Southampton. He’s also the occasional threat with his head.

Chilwell (LEI $5,100) – Leicester get two defenders in our side this week with Chilwell joining Maguire. Chilwell gets up and down the left hand side regularly and is one of the better scorers in his position. We expect him to outperform his solid average here.

Ghezzal (LEI $5,600) – We’ve gone with Ghezzal from Leicester to free up cash to use elsewhere. He started for the Foxes last weekend and should be in the thick of it in an attacking match against the Saints.

Ndidi (LEI $4,000) – Likewise to Ghezzal, Ndidi was selected because he’s underpriced and should pick up a few points higher than his average in a very winnable match.

Mane (LIV $8,500) – Sadio Mane is one of our premium picks this weekend. He’s always a goal threat and is one of the highest fantasy scorers on average. We see him and his fellow attackers having a field day against the Seagulls.

Hazard (CHE $11,200) – Eden Hazard is the most expensive player in the slate and for good reason. He comes up against a poor Newcastle side and should have a huge game at home. 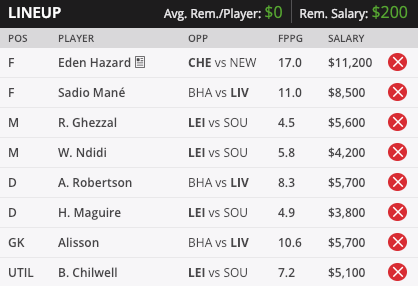