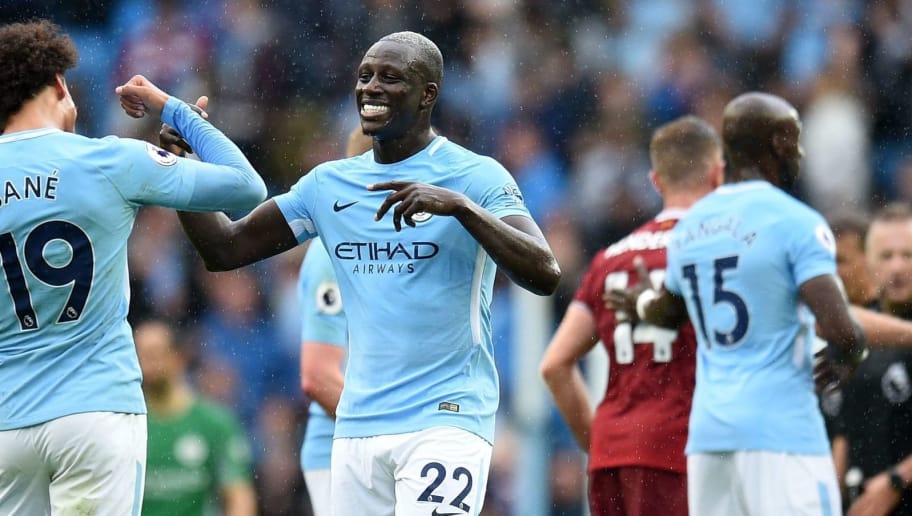 The fifth week of the 2018/19 EPL season kicks off this weekend and there’s some cracking games set to play out! Once again, we've put together our fantasy team line-up and provided some tips to help you with yours.

There are 6 matches that feature in the Saturday night slate this weekend, including Bournemouth vs Leicester, Chelsea vs Cardiff, Huddersfield vs Crystal Palace, Manchester City vs Fulham, Newcastle vs Arsenal, Watford vs Manchester United.

Like always, there are some fantastic DFS contests to get involved in on Saturday night. DraftKings are hosting a massive $50,000 contest, Draftstars have a $6,000 contest, PlayON have their own $1,000 contest, while SportChamps have a season long $5,000 tournament.

Your two best options between the sticks this week include:

Kepa Arrizabalaga ($6,000) – His name is a mouthful and a half, but he’s been in great form for Chelsea so far this season and should keep another clean sheet against Cardiff.

Ederson ($5,900) – Like the aforementioned, he’s been in solid touch and will most likely keep a clean sheet against the newly promoted Fulham. 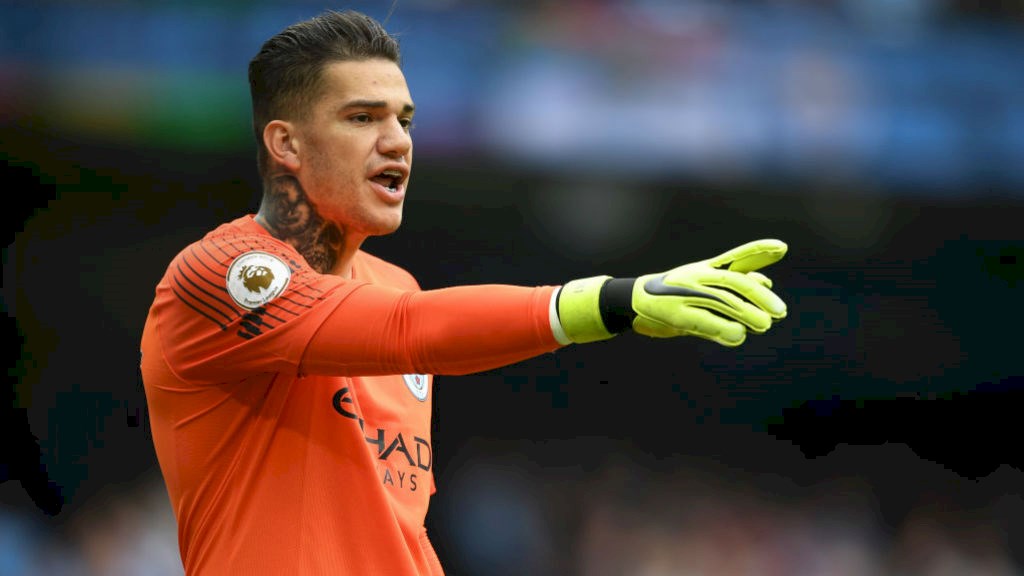 When selecting defenders you’re pretty much going in with same mindset as when selecting goalkeepers. Meaning you primarily just want players that are going to keep a clean sheet. The safe options this week are Chelsea and Manchester City defenders.

From Chelsea your best options are:

Marcos Alonso ($6,500) ­– He’s a bit more pricey than most other defenders, but that’s because he has a goal and an assist or two in him from time to time. Could be a good pick this week.

Antonio Rudiger ($3,900) – This man is a beast and is close to basement price. He’s a great value pick this weekend.

From Manchester City you should consider:

Benjamin Mendy ($7,100) – Mendy is much like Alonso in that he’s a pricey defender, but can produce midfield/forward like fantasy score. He’s already notched up 4 assists this season, which equals Jose Holebas for the most in the league.

Aymeric Laporte ($3,900) ­– French International, Laporte is your best cheap option for Manchester City in defence. He’s pretty much the same price as Kompany and Stones, but gets forward a lot more and is a bigger threat in the air. 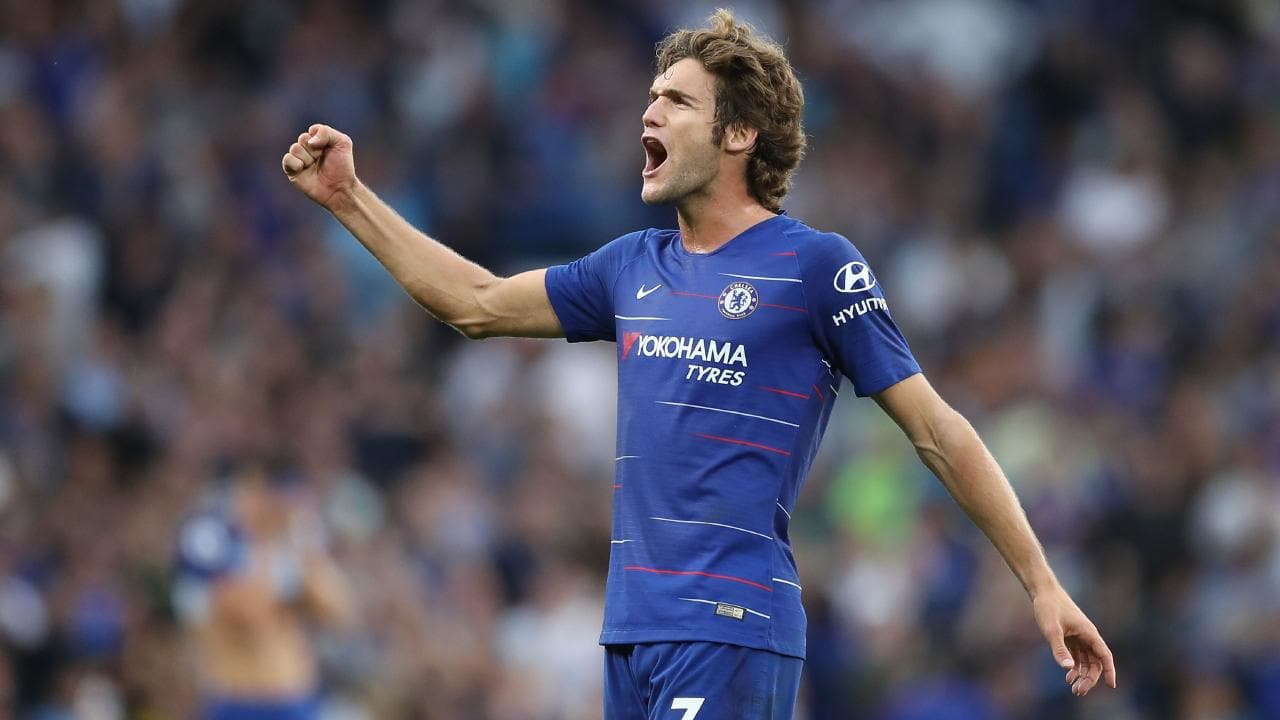 Sergio Aguero ($10,600) or Eden Hazard ($10,500) – You’ll most likely be picking one of these two players as fitting them both in is near impossible. They’re nearly identically priced, so I’d have to lean towards to more consistent Aguero.

Pedro ($8,200) and Willian ($8,800) – These two are always great picks if they’re in the starting line-up. Make sure to see if they’re selected before picking them in your team.

Alexandre Lacazette ($8,500) – This man looked extremely dangerous in his last outing when he paired with Aubameyang up front. He’s a big chance to score against Newcastle this weekend.

Some value picks to think about are:

Jamie Vardy ($6,800) – We’ve been very impressed with Leicester this season despite a couple of results not going their way. They’ll look to welcome back Vardy this weekend who will have a point to prove this weekend after serving a 3-game suspension.

Troy Deeney ($6,000) – If you feel that Watford can continue their remarkable start to the season by knocking off Manchester United, then Deeney is a great cheap option for your team. Tread carefully, though.

Aaron Mooy ($6,000) – Was superb in his last outing. He’ll be in the middle of it all once again for Huddersfield. 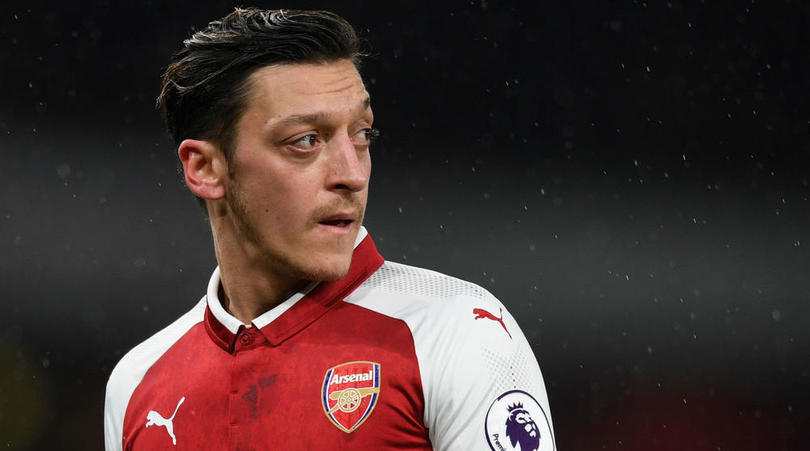 Picking Manchester City wingers is always tough due to how many they rotate through there. This week I’d take a fade on Raheem Sterling ($9,600) who is highly priced and is reported to be carrying an injury. Another attacker I’d stay away from this weekend is the inflated Romelu Lukaku ($9,400) who is coming off a brace in his last game. Manchester United are coming up against Watford, who are the surprise packet this season and currently sit equal top in the standings, meaning goals could prove to be few and far between for the Red Devlis this weekend. 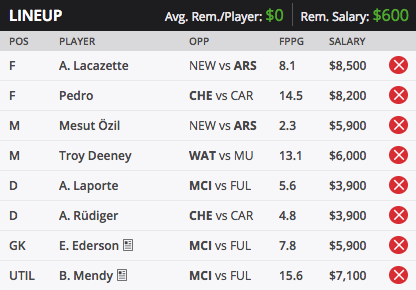