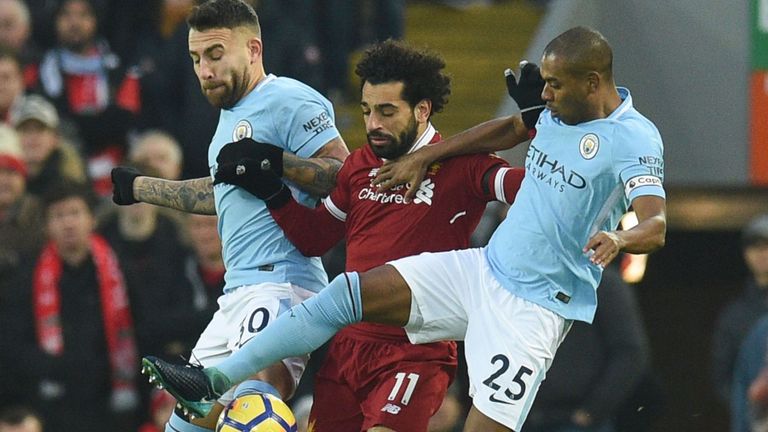 The biggest game of English Premier League football in recent memory is upon us with Manchester City set to host Liverpool at the Etihad. As it stands, Liverpool are seven points clear of their modern day rivals at the top of the table, and a win here would send the Reds well on their way to their first title in decades.

There are some huge DFS contests being offered for this big match, including DraftKings massive $20,000 contest, and Draftstars $1,500 contest.

Below, we’ve provided the best premium and cheaper picks, as well as our very own team for the Manchester City vs Liverpool match at DraftKings.

M. Salah (LIV $12,400) – We expect the Reds to sit deep and try and hit City on the counter, which means Salah is your best option here. He’s terrific on the break and has made a habit out of scoring goals in big games.

S. Aguero (MCI 10,600) – Kun Aguero must also be added in the list here. He’s been a hero for City time and time again and will be their most likely again on Friday morning.

D. Silva (MCI $10,200) – If De Bruyne doesn’t pass his fitness test, then we recommend including David Silva into your line-up. He’s one of the best playmakers in the world and will be in the thick of it again here.

K. De Bruyne (MCI $9,600) – As just mentioned, De Bruyne is under an injury cloud. However, if he’s named he’ll be a walk up starter into our squad.

S. Mane (LIV $9,400) – A cheaper alternative to Salah is his partner in crime, Mane. Mane also excels on the break and will be looking to use his blistering pace to good effect here.

O. Zinchenko (MCI $6,200) – The first value player we’ve taken aim at is Zinchenko for City. He’s the likely replacement for Mendy and picked up an assist in his most recent outing.

K. Walker (MCI $5,700) – The opposite full-back to Zinchenko is likely Kyle Walker here. We expect City to have a high press which means there will be plenty of opportunity for their full-backs to send in crosses and potentially pick up and assist.

Alisson (LIV $5,100) – Alisson has been a walking clean sheet this season. He’s been the anchor of a Liverpool defence that has conceded just eight goals in 20 fixtures. We like him over Ederson here.

V. Van Dijk (LIV $4,500) – If you’re looking for a really cheap option then VVG is great value. He’s a threat with his head from set-pieces and picks up plenty of points for his defensive work. 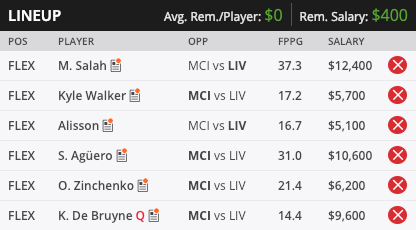