The 2018-19 English Premier League season’s mid-week Match Day 28 round continues with an exciting six-game slate on the cards on Thursday morning. There’s plenty of crucial fixtures among the six set to play, with all six of the ‘Big 6’ scheduled to play.

The six fixtures that feature on Thursday morning of Match Day 28 include:

Arsenal vs Bournemouth (6:45am AEDT)

Southampton vs Fulham (6:45am AEDT)

Chelsea vs Tottenham Hotspur (7am AEDT)

Liverpool vs Watford (7am AEDT)

As usual, there are some huge DFS contests being offered for the mid-week action. DraftKings are hosting a massive $50,000 contest, Draftstars have a $1,000 contest, while SportChamps have a season long $5,000 tournament.

Below, we’ve provided our best team for the featured matches in the 50K DraftKings contest.

Our best pick between the sticks on Thursday is:

Ederson ($6k MCI) – City have the easiest fixture of all the big teams in this slate. They’re almost impossible to penetrate, especially at home, making them the best defensive picks here.

As mentioned above, we believe that Manchester City are the standout selection in defence from this slate. They’ve conceded just 11 goals from 14 games at home and come up West Ham unit that has scored just 14 in 13 away fixtures. For this reason, we’re going with the three most likely starters for City in Walker ($5k), Otamendi ($3.8k) and Danilo ($5.7k). If you’re not sold on City at home, then Liverpool defenders seem the next best option.

Aguero ($10.2k MCI) – Our fifth and final City player in our team is none other than Sergio Aguero. The Argentinian is a goal scoring machine and will be licking his licks in this one.

Pogba ($9.3k MU) – United’s turn in form with their new manager has coincided with Pogba’s increased output. He’s been hitting the scoreboard lately and looks a real threat against Palace.

Redmond ($5.8k SOU) – A bit of a cheaper and left field option is Nathan Redmond from the Saints. We like all Southampton forwards in this home fixture against Fulham.

Wijnaldum ($4k LIV) – Our fourth and final player is Gini Wijnaldum. He’s improved in leaps and bounds for the Reds and is a mainstay in their midfield. Expect another good performance for him at home here. 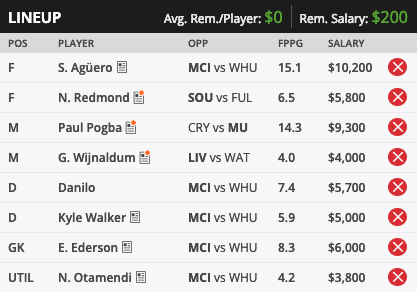