This weekend will see the second event on the Formula 1 calendar take place at Bahrain, with the race starting at 2.10 AM AEST on April 1st.

The season got underway a fortnight ago in Australia, where Mercedes came out victorious, but this time it was Valtteri Bottas who blitzed the field. Ferrari were further off the pace than expected and Red Bull appeared to have closed the gap further. Hometown driver Daniel Ricciardo had a bumpy start as hit a drain shortly after lights out, lost his front wing and eventually retired.

PlayON, the official Fantasy partner of Formula 1 will again have a $25,000 major contest at the end of the year, and every race prior will give you the opportunity to win free tickets into this event. They will also have 2 main contests every race which have $1,000 in prize money up for grabs, both with an entry fee of $11. There’s also smaller contests with smaller buy-in fees for the more casual players. 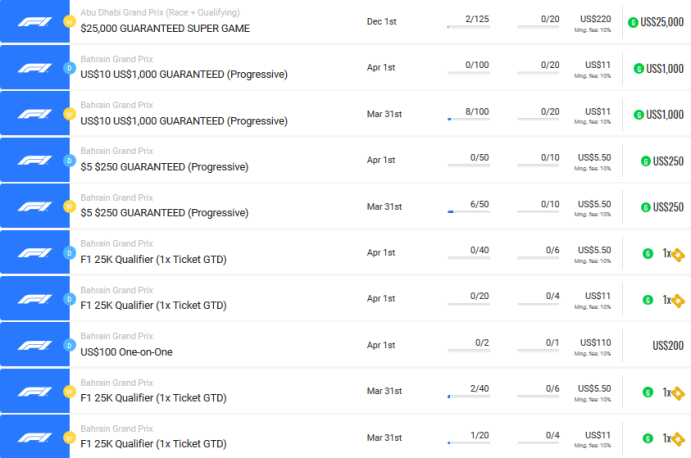 The Bahrain circuit is mostly a quick one, with a few quite slow turns, which in recent years has suited Ferrari, and while they are expensive at $29M, they are hard to ignore.

A tidy cheaper option worth considering is Haas at $9.5M. Both their drivers finished in the top 10 in Qualifying, with Kevin Magnussen running in 6th place, behind both Ferrari and Mercedes cars and one of the Red Bulls. His team mate retired due to a wheel issue, but was looking like joining him in the top 10.

Lewis Hamilton doesn’t take losing well, especially when it’s to his team mate. He may cost an immense $30.5M, but you can be sure he’ll be very close to pole and race winner in every race.

His rival of recent years, Sebastian Vettel has made a habit of making strong starts to the season and he has won this race the last two times it was run. He costs $27.5M and with a junior driver as his partner, will be given priority this season.

There’s plenty of mid-field options. Kimi Raikkonen was brilliant last race, finishing 8th after qualifying 9th. He costs $10M. Nico Hulkenberg is $11.8M and Daniel Ricciardo costs $12M, making both well worth a look. Kevin Magnussen who had a great start to his campaign is worth a very appealing $10M.

Make sure you get yourself over to PlayON, create an account and get yourself playing fantasy Formula 1 today! If you need help to understand how to play, check out our handy guide here.