The seventh race on the Formula 1 calendar takes place this Sunday (Monday morning AEST) at Canada. It will also mark a third of the season completed. The last race at Monaco saw Lewis Hamilton claim a victory to take him 17 points clear on the Drivers Championship.

The race at Monaco was also the first in 2019 where Mercedes didn’t finish in first and second place, as Valtteri Bottas came home in third. Sebastian Vettel got his Ferrari up to second place. Williams is the only constructor yet to have scored a point, with both drivers failing to finish any higher than 15th place. Antonio Giovinazzi is the only other driver yet to score a point this year.

There’s only one site that you can play Fantasy Formula 1 at, and they are the official fantasy partner of the Formula 1, PlayON. This week they will again have two major contests, both worth $1,000 each and with an entry fee of $22. One is for the Rave only while the other is for Qualifying and the race combined. They also have 6 entries into their end-of-season Super Game, which will see $25,000 in cash up for grabs. Get over to PlayOn today for your chance to win! 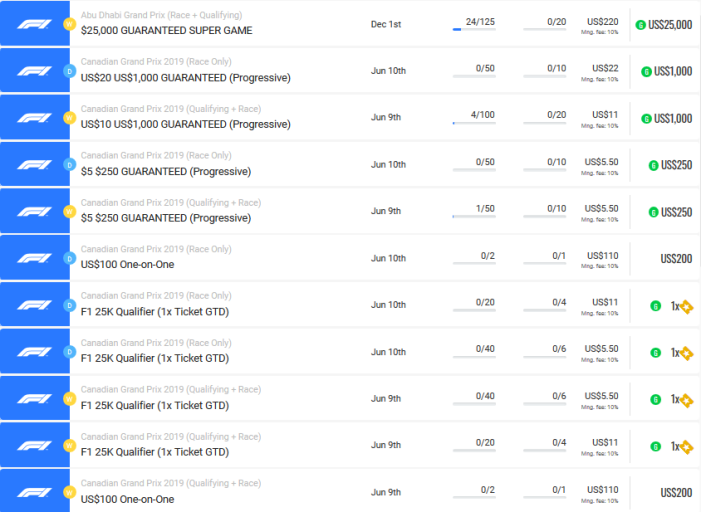 Mercedes ($32.5M) has outright dominated the field this year and have performed well at this track for several years now. Last year the race was won by Ferrari ($29.0M). In 2019, they’ve had both cars finish in the top 5 for every race, bar Monaco, where Leclerc retired.

Championship leader Lewis Hamilton ($31.3M) is the most expensive driver, but also the one with the highest average, by far and the greatest chance of getting pole and winning the race. His team-mate Valtteri Bottas ($21.9M) has been brilliant this year but priced very reasonably indeed. He’s been on the podium in every race this year, including two race wins. Sebastian Vettel ($28.2M) is the only driver outside Merceds to have finished higher than third in a race this year, when he finished second at Monaco in the last F1 race.

In the midfield, Renault’s Daniel Ricciardo ($11.4M) is starting to look more at ease with his new car. The experienced Kimi Raikkonen ($10.3M) has also been performing brilliantly this year. Kevin Magnussen ($9.9M) has been very strong and consistent in 2019 as has McLaren driver Carlos Sainz ($8.3M).