The Formula 1 season rolls on to one of the last few iconic tracks on the calendar this weekend when they travel to the Suzuka circuit in Japan. The track is a favourite for fans and drivers alike, offering something for every car type – two straights, a fast chicane, two very tight, slow turns and the iconic Spoon Curve.

This year will see the added difficulty of rain, which is expected to continue falling from Thursday through all three practice sessions and possibly even qualifying. The skies are expected to clear up for race day.

Lewis Hamilton has won the last 3 races and has also won 3 of the last 4 races at Suzuka, making him the favourite for another win. He’s very handy in wet conditions too, further enhancing his claims for top spot on the podium.

Once again PlayON will be hosting the only DFS contests in F1 this weekend. Aside from their $1,500 contests which cost $22 to enter, they will also be dishing out 8 entries into their end of season $20,000 Guaranteed game for the Abu Dhabi race. These entries cost $220 each and there are just 54 seats remaining, so be sure to enter into these contests to claim your spot! 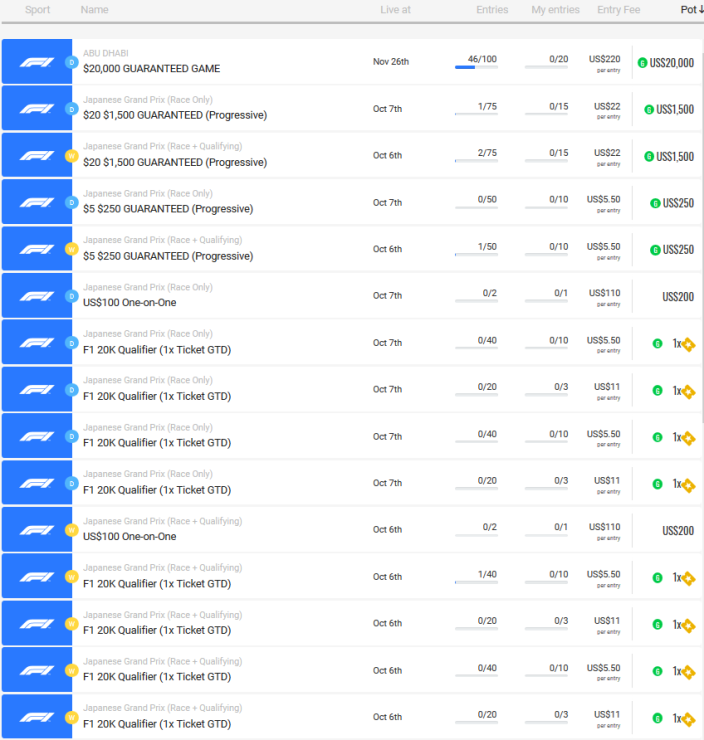 Mercedes have won all of the last 4 races at this track and the last 3 races of 2018, making them a strong choice for constructor, although they do come at a significant cost of $33.3 million. Ferrari cost $30.5 million and are expected to have both cars in the top 4 in both qualifying and race.

It’s become clear in the last few races that Mercedes are willing to issue team orders to protect and assist Lewis Hamilton. Valtteri Bottas has been driving very well all season, but some of his teams strategy has let him down at times, while on other occasions, he’s had to fall back to help Hamilton out. The Finn isn’t happy with this, but he’s a team player and does his job. Hamilton costs $31.3 million and is likely to deliver on that price, while Bottas at $24.8 million could be a little overpriced, as it seems his only chance of winning is if Hamilton isn’t racing.

Sebastian Vettel has gone from leading the drivers championship to trailing by 50 points. He costs $28.5 million and now has a bigger hurdle to overcome with both Mercs conspiring against him now.

Max Verstappen has shown to be quite strong in the wet and given his recent form, he could well become a threat for a podium place. He costs $21 million and along with Raikkonen at $19.2 million, are the two cheapest options for drivers averaging in double digits.

Charles Leclerc has finished in the top ten in both of his last two races and with a price of $7.1 million, is a very good pick up, while Romain Grosjean still remains an absolute steal at just $5.3 million.