The Silver Arrows are dominating the season, having picked up the top 2 places on the podium of all 4 races so far, with Valtteri Bottas holding a 1 point lead over team mate Lewis Hamilton. Sebastian Vettel is 35 points adrift of the Bottas in third, with Max Verstappen just 1 point behind him in fourth.

As always, PlayON will be the only place where you can play fantasy Formula 1. PlayON is the official Formula 1 fantasy sports provider and this week will again have a number of great contests available for all budgets. From their major contests with $1,000 up for grabs, which cost just $22 to enter, down to contests that cost just $5.50 to enter with $250 in prizemoney available. But it doesn’t end there, they will also have tickets into their end of season Super Game, where $25,000 in cash will be up for grabs. So get on over to PlayON and get yourself into a contest today! 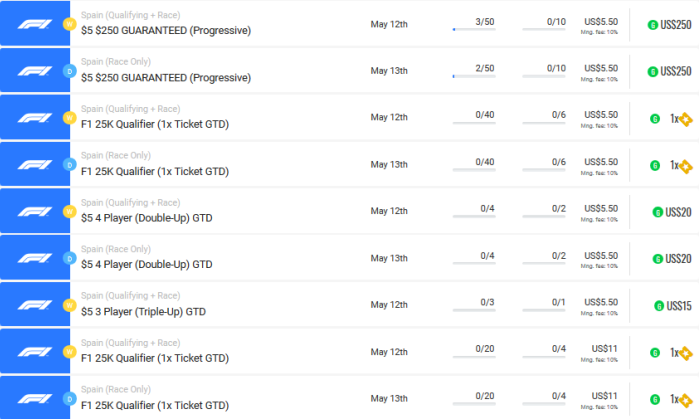 It’s hard to ignore Mercedes here given their dominance in the season so far and the fact that their drivers finished first and second at this race last year. The downside is that they cost $32.2M, which is close to a third of your available budget.

Racing Point ($9.8M) and Alfa Romeo ($9.6M) have both been performing brilliantly so far this year and are well worth considering if you have your heart set on buying a top line driver.

Ferrari ($29.2M) could be considered overpriced given their performances so far this year, with neither driver able to finish higher than third on the podium. The pressure will be heavily upon them to get both drivers in the top 3 this weekend.

Championship leader Bottas is a very affordable $21.7M and given his strong form, he’s very hard to ignore. Kimi Raikkonen ($10.6M) has finished in the top 10 in all 4 races so far, making him the best driver in the rest of the pack behind those in the top 3 teams.

For those wishing to take a risk, Renault drivers Nico Hulkenberg ($12.0M) and Daniel Ricciardo ($11.6M) have been hindered this year by unreliable cars. They are brilliant drivers whose luck is due to improve.

Hamilton is worth $30.3M and can never be ignored and has a magnificent track record over the past 5 years.