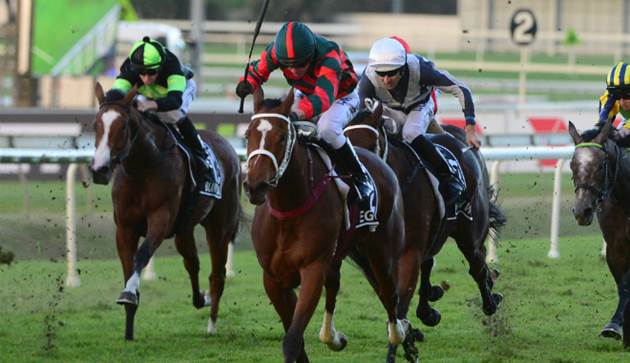 The AFL Grand Final will be centre of attention on Saturday, September 29th but there’s plenty of quality horse racing action throughout the day that will be the focus for horse racing betting tournament players.

Once again there will be some juicy prize pools on offer with racing tournaments offered at TopBetta and Moneyball.

Over in Sydney at Royal Randwick there’s a triple header of Group 1 action, but before the feature races get underway, leading trainer Chris Waller could provide you with a winner to boost your tournament bank in the first half of the card. Fingers crossed it’s a big day for Kerrin McEvoy.

Egg Tart is the $2.25 favourite with BetEasy to take out Race 4 and it looks as if she only really has one danger in the race to worry about (Ace High). Both come out of the G1 George Main Stakes behind Winx, where Ace High finished 4th and Egg Tart was ahead of him in 3rd. Egg Tart finished off well and that followed a luckless run first up in the G2 Tramway Stakes. She steps up to 2000m third up today. Her only other two starts at this distance were both in Group 1 races, where she finished 1st and 2nd, beaten a nose. Barrier 9 will likely see her get right back in the field so she’ll be coming right down the outside.

The first of the majors is the Group 1 Flight Stakes (Race 6) and Miss Fabulass should prov incredibly hard to beat following her dominant victory in the G2 Tea Rose Stakes a fortnight ago. She savaged the line on that occasion and gave every indication that the step up to the mile won’t pose any problems. Drawn well in barrier 3 for Kerrin McEvoy, she’s a deserved $2.15 favourite with Neds.

Immediately following that race is the Group 1 Epsom Handicap (Race 7) and it could be a Group 1 double for Kerrin McEvoy, who rides Unforgotten for Chris Waller. This mare was a super impressive winner of the G2 Chelmsford Stakes last time we saw her, and a repeat of that performance would see her very hard to hold out once again, despite this being a more competitive field. She draws well and carries a light weight under the handicap conditions, and she might just be the next big thing once her stablemate Winx retires. The $4.40 with BetEasy looks an appealing price.

Over at Mornington, the feature race of the day is the Ansett Classic (Race 7) and it looks a nice race for Gai Waterhouse and Adrian Bott’s Japanese stayer Hush Writer, who lines up for his third Australian start. He improved out of sight last time out and from barrier 1 today, we suspect he’ll kick up and hold the lead. At Mornington, that’s always a positive, and if he can steal a march on them around the turn he could prove very difficult to run down. As one of the later races on the day, this will garner plenty of interest and you can back him at $4.20 with Sportsbet.