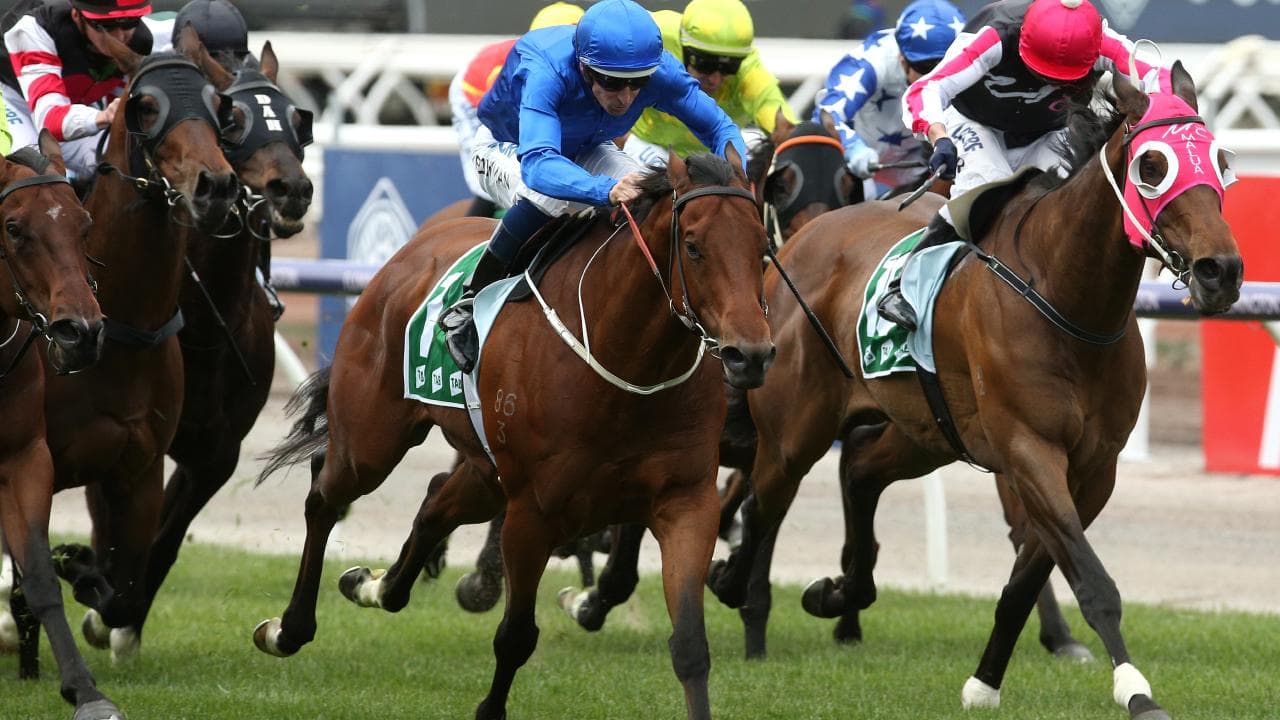 “How about a horse racing live final?”…

Just some food for thought, but with the exciting news of Draftstars announcing another live final for the AFL after plenty of success with the BBL, there is always hope. Regardless, there is still plenty of great horse racing fantasy action this weekend, but those in the southern states will  have their eyes peeled to the screens as South Australia and Queensland take centre stage with the South Australian Derby and the Doomben 10,000. Morphettville is currently a Soft 7 with rain expected leading into the weekend. With the rail out 2m, history suggests runners will come wide later in the day playing into the hands of those who get back. Meanwhile, Doomben is rated a Good 4 at present and that is likely to continue with plenty of blue skies expected heading into the weekend. The rail will race in the true and is expected to play very evenly with both those up front and from back to get their chance.

SportChamps is the leading provider of fantasy horse racing tournaments and they offer a range of tournaments to suit all budgets. Their major tournaments are run on a Saturday with rebuy and no-rebuy options across the major metropolitan venues. This Saturday there is a $7,500 guaranteed tournament covering the metro meetings for $50 entry with 1 rebuy as well $5,000 guaranteed for a metro-only tournament at the cost of just $50 with no re-buys. For those that are time-poor or are looking for an early win, they run consecutive hour-long tournaments across a range of races, spanning all 3 codes as they carry on later into the night. They also offer free entry tournaments, giving those new to fantasy tournaments an excellent chance to get the hang of it without any financial risk.

Moneyball and TopBetta also offer a vast range of tournaments, albeit slender rule variations, there is still plenty of prize money up for grabs. Despite the slightly smaller fields, options are a plenty for those wanting to play tournaments and we recommend you try out the different sites and options to find out which ones work for you. So with plenty of group racing on over the weekend, if the AFL just isn’t cutting it or the NRL isn’t giving you the magic you wanted, pop on the racing as we give you our best bets to give you an excellent opportunity this weekend.

Heading to Scone to kick off the day with the rail out 3m from the 800m and a bit of give in the track, likely to play evenly throughout with backmarkers to get their chance in the straight. A handy little race for the youngsters, I am going with the Hawkes trained Wild Planet who looks well placed on the wide open Scone track. Above average finishing off in the South Pacific Classic last start, the 3yo gelding will be ready to peak 3rd-up from the inside draw. Military Zone opens up the favourite but will need plenty of favours, while Signore Fox comes out of the same lead-up as Wild Planet where he was comprehensively beaten and it is hard to see him turning the tables here. Expect to see Berry camp in behind the lead, not pushing the button till late to claim victory. Currently you can get $3.50 for Wild Planet at Neds.

Leading up to the 10,000 will see some quality horses going around for 125k in prize money as they look to kick off their Brisbane winter campaigns in style. Despite the likes of Tom Melbourne, Plein Ciel and Music Magnate in the field, it is 3yo colt, Gem Song that looks perfectly set-up for the mile. From the gun draw Stewart will look to camp in behind the leaders before releasing the brakes on the Your Song colt to show his trademark turn of foot. He loves getting out to the mile and under handicap conditions, gets in light at the weights. Interesting that Lees has gone with Ron Stewart for the first time, but that shouldn’t hamper the colt’s chances. Heavily backed already in betting, there is still value in this runner as you look to build your bank ahead of the feature sprint. Currently you can get $2.70 for Gem Song at Sportsbet.

Final chance... Well that is what I said last time Osbourne Bulls went around, but I am going to say it one last time. For a horse that has only missed the placings on one occasion, it has been tough for the followers and rightfully so with the Godolphin gelding always offering so much without victory. Fresh from the All Aged Stakes a fortnight ago, he had no excuses in behind Pierata other than the lack of tempo. He should get that today though with the Gollan trained I’m A Rippa likely to take it up to Nature Strip, White Moss and The Bostonian up front. This will set up nicely for the 3yo Outback Barbie who runs well fresh, but I think it is Osbourne Bulls who will be tracking them everywhere they go before pouncing late. Yes, he’s not exactly the price of a runner you want to be backing from back in the pack at Doomben, but he gets the favours to break his duck today. Currently you can get $3.20 for Osbourne Bulls at BetEasy.

There is something exciting about Oaks, Derbies and Cups when they get over 10 furlongs, and you’re asking various form lines to all come together in complete cohesion… Not! Nevertheless still exciting, especially when there is one at odds that really jumps out. Fresh from the Chairman’s Stakes a fortnight ago, it is the Macdonald & Gluyus trained Star Status that stood out to me coming from back in the ruck to finish 4th. Although beaten that day by Declarationofheart, Star Missile and Classic Weiwei, Star Status looked to be trucking and should relish stepping out to 2,500m for the first time. With plenty of rain hanging around leading into the weekend, there are concerns over a few of the favourites, but that could really fall into the hands of Star Status. Expect, Raquel to sit patiently at the rear, before a last ditch attempt down the outside in the straight. Currently you can get $51 for Star Status at Pointsbet.