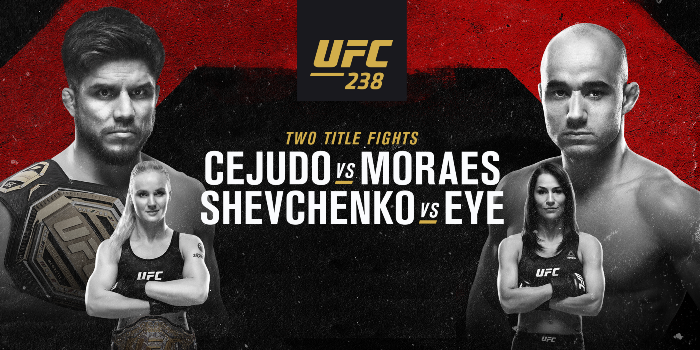 Two titles will be on the line this Sunday at UFC 238 in what looks to be great day of mixed martial arts action, coming live from Chicago.

The Women’s Flyweight Title will be defended by Valentina Shevchenko against Jessica Eye followed by the main event, where Henry Cejudo will take on Marion Moraes for the vacant Men’s Bantamweight title.

DraftKings have a large number of contests running for this event covering every budget and game type imaginable, as you’d expect from one of the biggest Fantasy Sports sites in the world. Their major contest though will see an impressive $150,000 in prize money on the line, with first place set to pocket $30,000! It costs just $15 to enter and has a huge number of places available.

If you haven’t played Fantasy MMA/UFC before, be sure to check out our guide here. We also have a review for the DraftKings website, which you can access here to help you use the site.

There has been one change to the initial card, with Felice Herrig suffering from a torn ACL and has been replaced by Angela Hill for the bout against Xiaonan Yan.

The main event here is set to be a battle which could well be fought mostly on the floor, where Marion Moraes will be right at home and will be looking to lock in any of a number of his submission holds. Moraes costs $8,300 and has averaged a healthy 81.5. Moraes is more aggressive, recording 1.72 knockdowns on average per 15 mins to Cejudo’s 0.48. Moraes is equally adept with submission hold as he is with striking, while Cejudo is more of a grappler/striker who has a knack for going the distance in fights, which means more opportunities for Moraes to score points.

Valentina Shevchenko is set to successfully defend her title according to betting markets and quite convincingly. She costs $9,600 and has an average of 80.6 and comes against a fighter known for having most of her fights go to points decisions. Shevchenko is equally powerful with her strikes as she is with her submission holds.

The undefeated Tatiana Suarez is on the undercard and has the highest fantasy average of 130.9 and thus costs the most at $9,500. She’s got both striking power, submission holds and endurance, making her a powerful fighter. Her opponent Nina Ansaroff costs $6,700, averages 66.6 and lands an impressive 5.09 strikes per minute, better than her opponent, she’s also stronger defensively against strikes. She will be both cheap and capable of scoring 50+ points which is a good combination to have.

Tony Ferguson is a brilliant all-rounder in the octagon with an equally good record of 25 wins from 28 bouts. He has the advantage in arm reach by over 3 inches which he will use to his advantage, given he is a prominent striker and his opponent has more of a grappler style. He costs $8,600 but has an impressive average of 93.1 making him a must pick.

Jimmie Rivera will come up against Russian Petr Yan in a bout where Yan is expected to win, however Rivera is no slouch, as his 22 wins from 25 bouts record shows. These two fighters are strikers and have a history taking their fights the distance. Rivera costs $6,900 and has an average fantasy score of 60.1.