The main event is being billed as Moicano vs Korean Zombie, a featherweight bout between Renato Moicano and former UFC Featherweight title challenger Chan Sung Jung. There are a total of 6 fights on the main card and another 6 on the preliminary card, making for plenty of action! 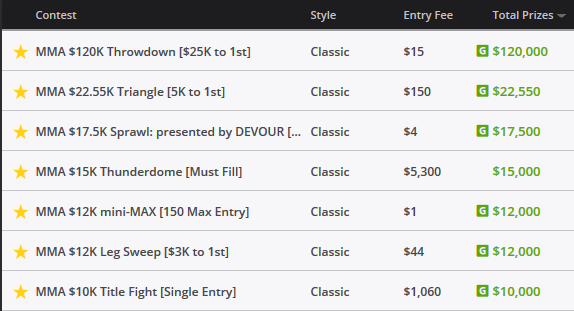 When it comes to playing Fantasy UFC, the only place to go is DraftKings. Once again, they’ll be putting up a mountain of cash in prizes for this event, with their major contest paying out $120,000! It costs $15 to enter and places will fill up fast over the weekend, so don’t hesitate.

NEWS
Deron Winn was initially slated to take on Markus Perez, however Perez was replaced on May 9 by Bruno Silva, due to injury. On June 16, Silva pulled out of the bout and he has been replaced by Eric Spicely.

The penultimate bout of the main card was initially meant to be between Cody Stamann and Rob Font, however an injury to Stamann saw him replaced by John Lineker.

From the main event, Renato Moicano is worth $8,600 and has an average fantasy score of 75.9. He’s 4 inches taller and that is seen his advantage when it comes to leg reach. He’s also the prominent striker and grappler in his bout which should auger well for his score here.

Chan Sung Jung looked set to win his last clash, having dominated the majority of the fight, but was knocked out by an elbow with just seconds left in the bout. He’s tenacious, versatile and well-rounded in MMA. He costs less than Moicano, at $7,600, yet has a higher fantasy average of 81.8, making him a very attractive option.

Montana De La Rosa is an impressive grappler, having won 80% of her 14 bouts by submission, with the others decided by points decision. This shows she has staying power in the octagon which is great news for fantasy scores. She also has the unique combination of a low price ($7,500) and high average (94.5) that makes her hard to ignore.

The final bout of the Preliminary card will see Dan Ige take on Kevin Aguilar. Ige costs $7,800 and has a healthy average score of 87.0 while Aguilar costs $8,400 and averages 74.0. Both are very fast paced fighters, with rapid strikes and good submission holds. This bout is set to be a strong contender for Fight of the Night. Both combatants are well priced and will throwing everything they have at each other here.

Finally, for a cheaper option, Matt Wiman could be a cheap risk worth taking. He’ll return to UFC for the first time since 2014. He is the cheapest fighter at DK for this bout, worth just $6,700. His average score was a very good 71.0, so if he can get near that here, he would be a brilliant inclusion.