UFC Fight Night this week will be seen in Australia on Sunday, June 30th, coming from the Target centre in Minnesota.

Plenty of good fights are on the card, with a heavyweight bout between Francis Ngannou and Junior dos Santos headlining the event. There’s a great mix of bouts here, ranging from Flyweight to Heavyweight, which will make for some great action!

And the only place to go to play Fantasy UFC is DraftKings. The world’s premier fantasy sports site will be putting up another huge pile of cash in prizes, with their major contest paying out $130,000! It costs $15 to enter and places will fill up fast over the weekend, so don’t hesitate. 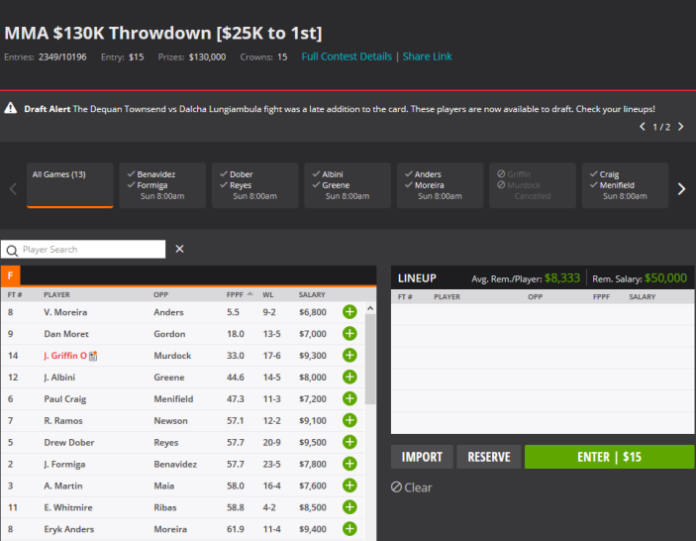 NEWS
Roman Dolidze has pulled out of his bout with Vinicius Moreira and has been replaced by Eryk Anders.

Sergio Pettis also pulled out of his bout with Ricardo Ramos, being replaced by Journey Newson.

Justin Ledet has been replaced in his bout with Dalcha Lungiambula by Dequan Townsend.

In the main event, former UFC Heavyweight Champion Junior dos Santos is worth a very attractive $7,400 and has an average fantasy score of 84.8. However his last 3 fights has seen him win all three and produce some very good scores of 85, 99 and 95. Dos Santos is at a disadvantage when it comes to weight, arm reach and leg reach, but he is a significantly stronger striker, which will be good to help him accumulate a good score again here.

Francis Ngannou has won his last two bouts and currently has a fantasy average of 78.8, with his last two bouts bumping up that average significantly. He had a first round win in both of his last two bouts, scoring 107 and 93 points respectively. He's the dominant striker in this main event bout, yet the fact that 31% of his victories have come via submission shows that he's not one-dimensional.

Alonzo Menifield Is undefeated in the UFC and has the highest fantasy average for this card, at a very good 116.5. He costs a lofty $9,000, but he’s the more prominent and powerful striker in his match, where he takes on a genuine grappler in Paul Craig.

Polo Reyes is worth $6,700 and has a Fantasy average of 72.9. His last win saw him score a brilliant 119 points, where he had a first round victory. He followed that up with a disappointing 12 points in his second round loss. He’ll have a significant height and leg reach advantage over his opponent, which will suit his style very effectively. He also costs the least of all fighters on the card.

Roosevelt Roberts is undefeated and his 2 recent fights in the UFC has seen him win by submission in the first round, producing a fantasy score of 98 and followed up with a third round win by decision, where he scored 85.