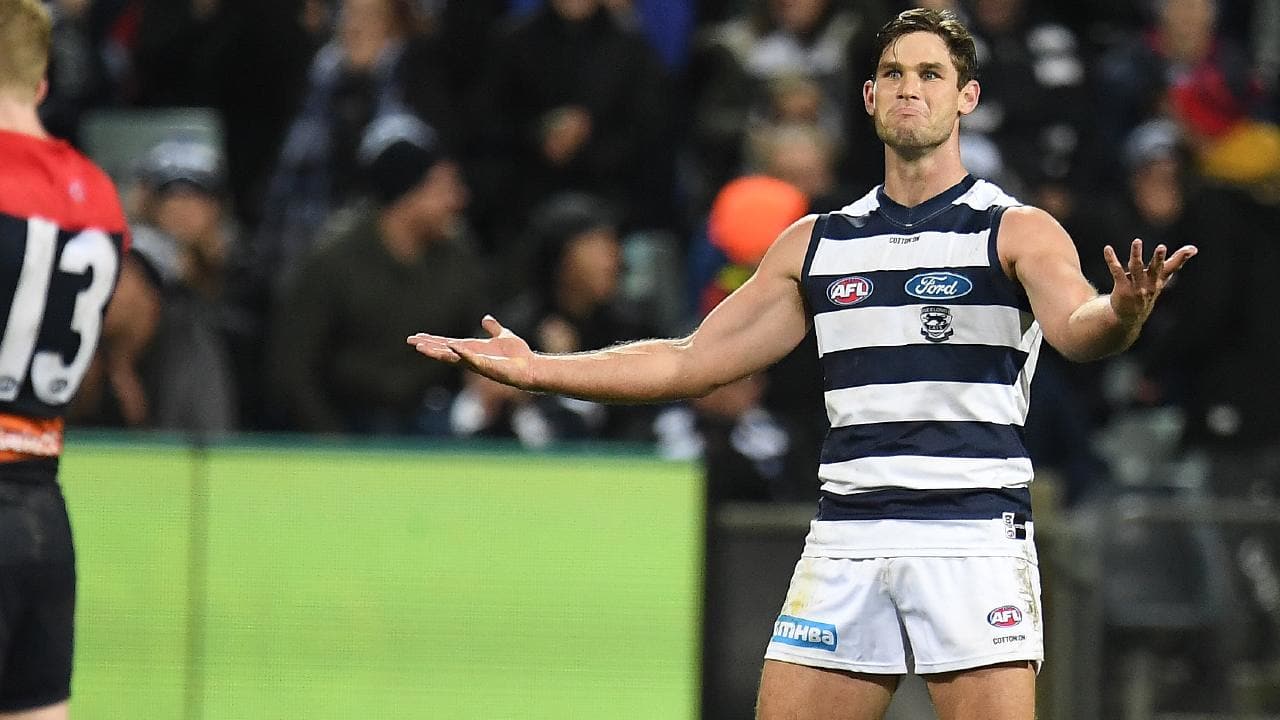 The 2018 AFL Finals will continue on Friday night when the Demons host the Cats in the First Elimination Final at the MCG. It should be a cracker with both sides fighting for survival and looking to progress into the second week of finals.

DFS sites have provided us with some great contests for Friday night’s final, Draftstars have a huge $40,000 contest on, Moneyball have a $5,000 tournament, while PlayON have their own $1,000 contest, as well as some qualifiers for their $5,000 Grand Final contest.

Fantasy Boss have provided us with another special finals edition of our Crunching Numbers DFS lineup tips for Melbourne vs Geelong.

Come finals time, we are dealing with fairly evenly matched teams. And it is no different in the DFS world for this game, with only one favourable match-up for the Geelong midfielders (+4.1) and a handful of unfavourable match-ups to avoid. 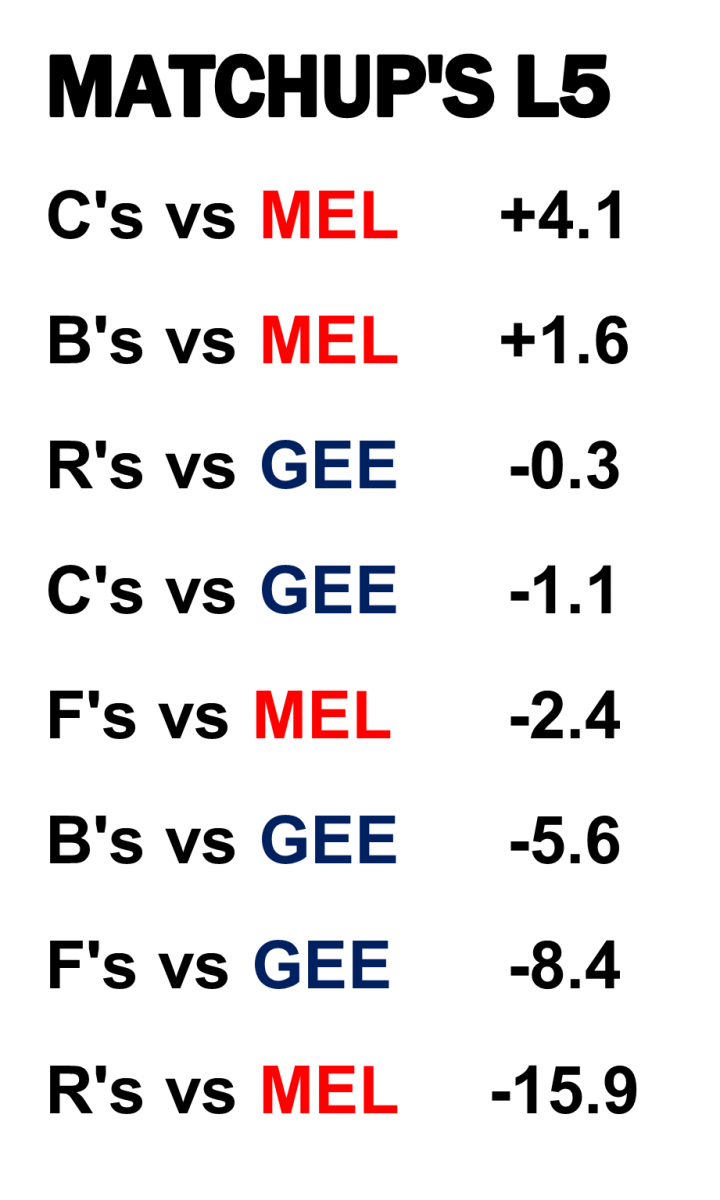 We will cover some Geelong midfielders to target later. For now, in the be wary basket are Melbourne backs (-5.6) and Forwards (-8.4) who face a tall ask to outscore their counterparts and Geelong ruckman Ryan Abbott who comes up against All-Australian man mountain Max Gawn and a -15.9 differential. Abbott who will play just his 4th game has burst on to the scene averaging 93. Unfortunately, that looks like coming to an end, with the opposition ruckman averaging just 74 vs Melbourne over the last 5 games.

Recent scores against Melbourne suggest that we can expect a Geelong midfielder to cash in here.

Your options here include:

The one Geelong midfielder that you won’t find above is Joel Selwood. He hasn’t been in great form recently, averaging just 88 in his last 5 games, which is -13 on his season average of 101. Selwood has been copping a lot of attention from taggers and since round 17 he has produced lowly scores of 73, 70, 64, 87, 89, and 75. We have no doubt that Selwood will rise for the occasion, but with the form that Melbourne tagger Harmes is in, it is a risky selection. Harmes limited Selwood to 70 just 5 rounds ago.

The demons midfielders face the 8th ranked team for conceding points to mids, so there is certainly not reason to completely exclude them from calculations, especially with the form some find themselves in: 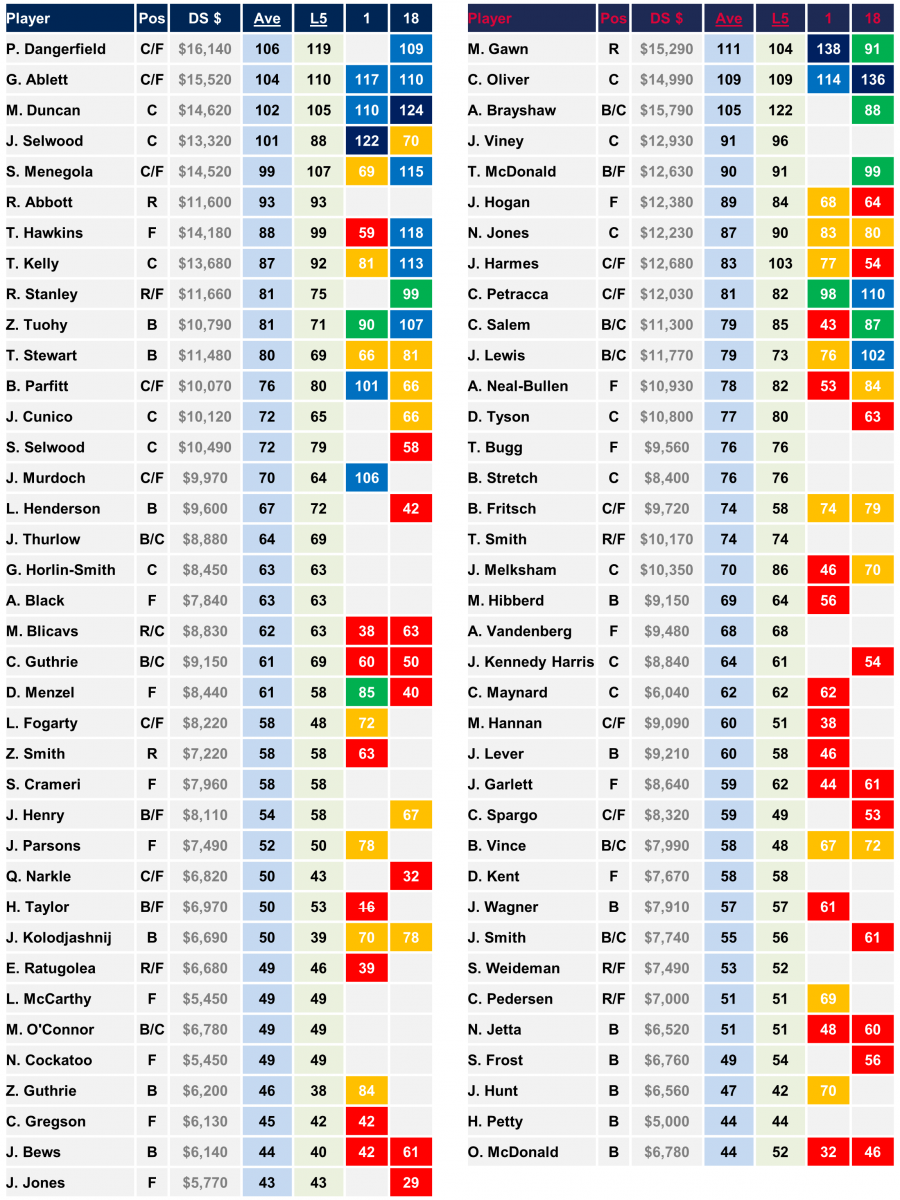 Melbourne and Geelong have faced off twice this year, in Rounds 1 and 18. A quick look at these two games helps to reaffirm some of the trends outlined above. For Melbourne there was fairly limited scoring bar Gawn, Oliver and a handful of others. It is quite clear that the majority of backs and forwards were restricted to below their standard scoring output.

On the Geelong side, their Midfielders were clear standouts. Danger, Ablett, Duncan, Menegola and Kelly all featured heavily in either one or both of the games and Selwood copped the Harmes tag in Round 18.

Interestingly, but certainly not out of the ordinary with players thriving in specific roles against specific teams, Petracca and Touhy both well and truly outdid their season averages for both games. Something to chase if you think this will continue.

The cheat sheet below gives you everything you need to know to help you build your DFS line-ups for Melbourne vs Geelong on Friday night.

*Cheat Sheet will be updated when the official team lineups are announced. 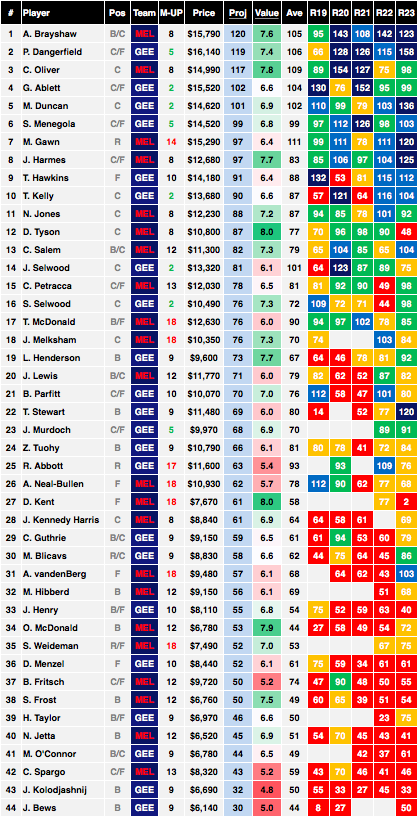