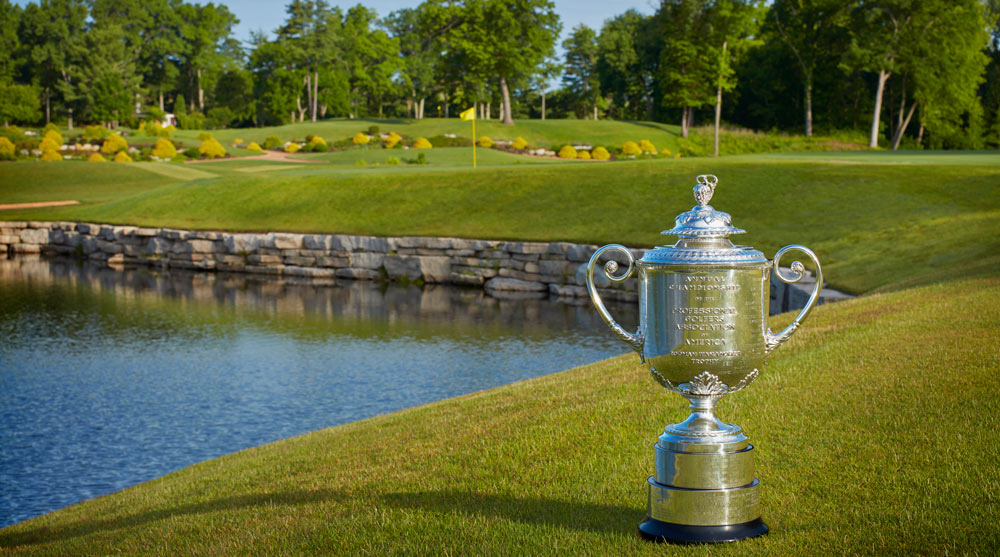 The 2018 PGA Championship will be held this weekend from Bellerive Golf Course in West St Louis and to celebrate, DraftKings will be hosting a massive $2,750,000 tournament with entry at just $20 a pop! The winner of the tournament will become an instant millionaire and the top 37,425 will win at least $30.

We offer our best fantasy line-up for the weekend’s action below! 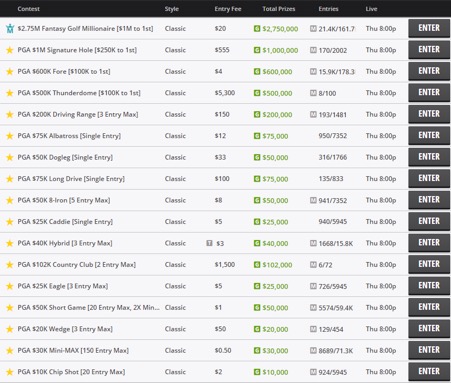 The Bellerive Golf Course is a tricky one which features some of the biggest greens on tour and more dauntingly some of the deepest and hardest bunkers to navigate on tour. Accuracy off the tee and with long irons will be key this weekend, so we have tailored the bottom end of our team around strong tee to green players.

This is where we are hoping the money is made this weekend. Justin Thomas is arguably the most in form golfer in the world at the moment and is coming off a fantastic win at the WGC Bridgestone Invitational on the weekend. The win is just his first of the season so far but he already boasts a whopping 15 top 25 finishes and has made the cut in 16 of his 18 tournaments so far this season. Drove the ball extremely well at Firestone on the weekend finishing 11th in driving accuracy and 2nd in GIR with an impressive 75%.

An elbow injury has hindered a lot of Stenson’s season, but he's now played two tournaments since returning from the injury, finishing in the 30s in both. Along with the likes of Adam Scott and Hideki Matsuyama, Stenson is probably the purest mid-long iron player in the game and is deadly accurate off the tee. This season, Stenson is ranked first in GIR percentage with a ridiculous 74% and is ranked 2nd in driving accuracy with 75%. When fit, rarely makes a mistake and we think this could be his comeback to the big stage after finishing 6th in both The Masters and U.S. Open earlier in the year.

The South Korean was fantastic in the Canadian Open just two weeks ago, finishing T2 with a great final score of -20. He is one of the longer drivers on tour with an average of 308.7 yards and while his accuracy off the tee leaves a little to be desired, he is above average in his approach to the green. Is a mid-ranked and mid-priced player in every conceivable fashion of the term but has the capable of going on sick hot streaks as he has shown this season with top ten finishes in The Honda Classic, RBC Heritage, The Memorial Tournament and The Canadian Open.

Was one of the few top line players who will be lining up this weekend who didn’t play in the WGC Invitational on the weekend. Will have likely had extra practice on the Bellerive Golf Course throughout the week to prepare so should be coming into the tournament with a slight advantage there. Finished tied for eighth place in his last outing at the Canadian Open a few weeks ago and has finished top ten in three of his last six starts. Poor performances at the start of the year lowered his DraftKings price but I think he is starting to play some really strong golf  post May. Is one of the better scramblers and sand savers in the game which should also give him an advantage given the big Bellerive bunkers.

The 19-year-old has burst onto the PGA scene this year, playing in 10 PGA tournaments and has already racked up an astonishing four top 10 finishes in that time. Has made the cut in his last three PGA Tour events and throughout those 12 rounds has only shot two scores above 70. Ridiculous form at the moment and should be well practiced at the Bellerive after not playing in the WGC on the weekend. 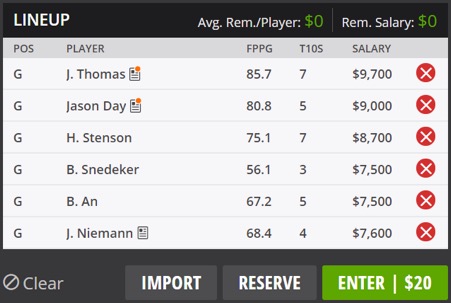