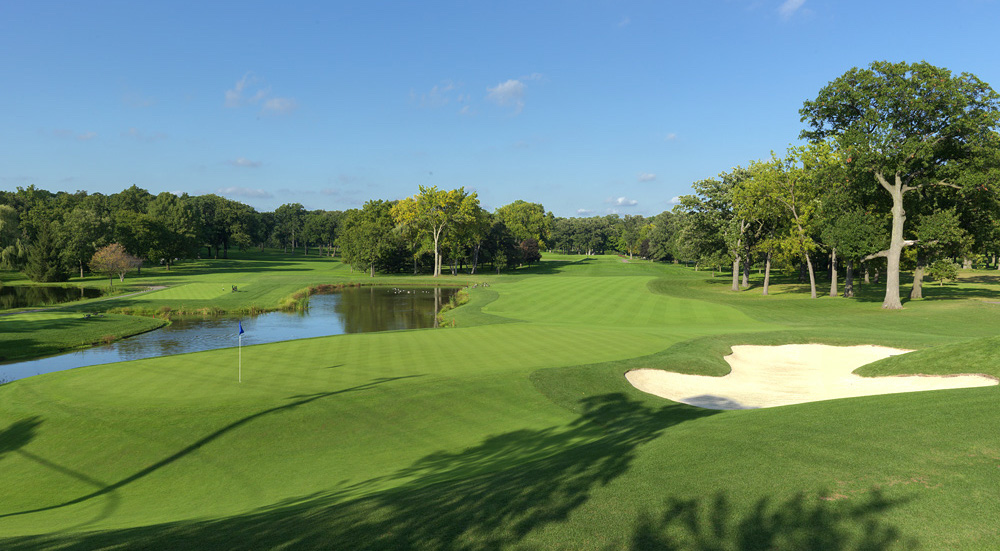 We’re now at the second round of the FedEx Cup Playoffs for the PGA Tour with the remaining players competing at the Medinah Country Club, a Par 72 playing 7,657 yards in Illinois. Each of these last two events will feature a no cut format, with 69 golfers in the field this week (was 70 but now 69 with the withdrawal of Kevin Na). The top 30 will make the final event at East Lake next week.

Medinah is a long undulating course lined with over 4,700 trees, which demands accuracy off the tee. Five holes have water in play but the main feature itself is the tough test of distance and accuracy. Two of the par 5’s are over 600 yards yet there is a drivable Par 4 at 330. All par 3’s are over 190 yards.

Medinah has hosted three big events in the past including the 1999 PGA Championship (won by Tiger Woods), the 2006 PGA Championship (won by Tiger Woods), and the 2012 Ryder Cup (known for Europe’s ‘Miracle at Medinah’). So there’s a little bit of course history for the select few. My advice this week is to look for a great all round game but have an emphasis on accuracy and the ability to save par.

This is a no cut event, so you’ll want to find winners instead of cut makers. Only the top 30 move onto next week and around 20 to 25 are already safe to move on. So for those outside, it is either ‘lights out’ or go on holidays.

According to rotogrinders.com this week's key stats include:

2) Strokes Gained Off the Tee

4) Strokes Gained Around the Green

On Draftstars a $6,000 contest is available along with 3-ball and mini contests.

It’s likely that this is the last tournament for Draftstars for the current PGA season. With a modified event for the finale next week it is doubtful a fair DFS contest can be played. Yet the PGA season is long and will be back in Mid September with a new season for the PGA. This will be the last chance for a while to play the big players.

Let’s see who I am keen on this week’s BMW Championship!

Justin Thomas ($10,000 DK $18,880 DS) - Isn’t Thomas just lurking in the last couple appearances - an 11th and a pair of 12th’s in the past three events has probably frustrated owners. But I feel he is going to pounce this week at this challenging layout. 1st in the field for SG: Approach and 17th in the field for SG: Off the Tee. Like I've said before, if we have a good putting week from Thomas, then we have a winner!

Patrick Cantlay ($9,800 DK $17,930 DS) - I am going to pair Thomas with Cantlay in a lot of builds this week, especially in Draftstars 3-ball competitions. Cantlay led the field in Birdie’s made last week, and like Thomas, he’s been lurking in those top 15 positions in previous events. With a small field of 70 I have confidence that Cantlay will make a run for it here at Medinah. 14th in the field for Strokes Gained: Off the Tee and also SG:Approach as well.

Tony Finau ($8,500 DK $15,720 DS) - Finau is my sneaky for the week as he hasn’t really done much since his third place finish at the Open. He hasn’t contended but he hasn’t stunk it up either and he’s at a great price on Draftstars. I’m looking at his length off the tee and his better than average proximity stats as well. Hopefully he’s on the lower end of the ownership scale.

Ian Poulter ($8,000 DK $14,510 DS) - I see Poulter building back to the stud golfer he was back in his prime. 10th at the Northern Trust and an eighth in the St Jude, so his form is excellent. Whilst his approach stats are not exempelry, he’s getting the job done around and on the greens. 14th in the field for SG: Putting. Like Finau, little sneaky for the weekend.

Adam Hadwin ($6,900 DK $10,740 DS) - Hadwin finished T43 at the Northern Trust last week on the back of some good putting and accuracy of the tee. I like him as a cheaper option as he’s ranked eighth in driving accuracy and 15th in proximity in the field. What pops out for me is that the course is long, especially on Par 3’s. Hadwin is second in the field for proximity from 200+ yards, so that is the key for him this week.

Tiger Woods ($8,000 DK $15,940 DS) - Gee you would be a brave person picking Woods in your teams this week after withdrawing from the Northern Trust. He burnt me and many others last week and I’m going nowhere near him this time. It’s an oblique injury he’s dealing with, so I’m not sure he will even play at all. Save yourself the trouble and avoid Tiger this week.