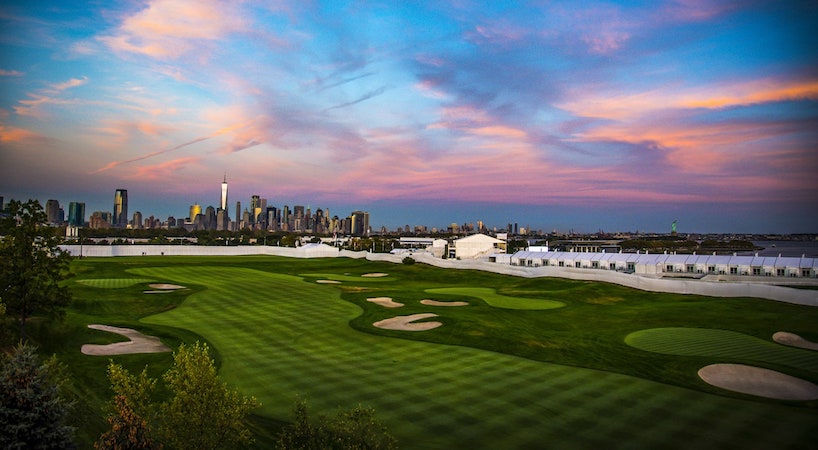 The Northern Trust is the first leg of the FedEx Playoffs which will be held at Liberty National Golf Club in Jersey City, New Jersey. A picturesque course with Manhattan and the Statue of Liberty views, so get ready to see many montages of the statue in the coverage! The course is a par 71 measuring just under 7,400 yards and is one we don’t regularly see on the Tour. The last event was the 2017 Presidents Cup (Won by the US 19-11) and the last PGA tournament was ‘The Barclays’ back in 2013, an event which was won by Adam Scott.

The course itself is a challenging and long course with smallish Bermuda Greens which are expected to be lightning fast (over 12 on the Stimpmeter). There are 10 water hazards in play and over 100 bunkers on the course, so it’s going to be a tougher test than the previous events in the Wyndham, and in a lesser degree, the St Jude.

Being the playoffs, you could make a case that this is the best field of the year with the top 121 golfers in the FedEx standings teeing it up. Top 70 plus ties move on after two rounds in what’s a fairly small field. It’s imperative we get 6/6 through the cut, and more importantly, all of your lineup needs to contend. Very similar to say, like, the Masters, where the cream tends to rise to the top in these big events. You could employ a Stars and Scrubs strategy, although all the stars are here, so you’ll need to nail them in order to be effective. The contrarian play is to go a balanced lineup, but as recent history suggests, five of the past six winners of this event have finished T13 or better at the year’s final major championship (the British Open this year and the PGA Championships in years past).

Being a long course, you can certainly look at ‘bombers’ as the fairways are of an average width. More importantly though, I’ll be looking at ‘ball strikers’ with emphasis on Tee to Green:Approach and proximity. According to rotogrinders.com the key statistics this week include:

It’s a special week on Draftkings as the Fantasy Golf World Championship are being contested with only 200 qualifying entrants battling out for $1.25 million USD in prize money. DFR’s number 1 ranked Australian player in ‘jayk123’ has four seats to the event. I will post the link to the event on the DFR’s Twitter page once the event commences so we can get our man home!

Along with the FWGC, Draftkings have the Championship series where this week $800,000 is the feature event for a $5 entry fee. Draftstars have posted a $6,000+ contest and 3-ball contests as well.

Let’s look at my picks for the 1st leg of the playoffs - The Northern Trust!

Brooks Koepka ($12,000 DK $23,290 DS) - That’s a big salary on Draftkings, although on Draftstars it seems to be a little too cheap (considering the min price at $8k are actually top 120 ranked players). Recent winner at the St Jude, Koepka is now hunting the big pay cheques in these playoffs. His approach game from 175+ yards is elite, and he has brilliant form from the St Jude and the British Open, which means he’s a scary fade on Draftstars. On Draftkings you’ll have to get funky with your builds as $12k is a fair chunk of your salary. 4th in the field for Birdies or Better % 7th in the field for Bogey avoidance.

Rickie Fowler ($9,300 DK $17,890 DS) - Going off the stats I mentioned earlier, Fowler’s last tournament was the British Open where he was a T6. I like him here where he has the length and rates really well in proximity from 175+ yards. Fowler is 16th in the field for Bogey Avoidance and 15th in field for strokes gained putting. Considering Patrick Cantlay ($9,200 DK $18,480 DS) will be higher owned, Fowler is a great pivot at his salary this week.

Gary Woodland ($7,800 DK $16,080 DS) - Wow, this is pretty cheap for the US Open champion on Draftkings. He did score a low fantasy score at the British Open, but he did just miss the cut on the number. The recent edition of twins into the family means that he has ‘baby swag’, which should boost his confidence… Or it might mean no sleep… 9th in the field for Strokes Gained off the tee and 3rd in the field for Birdies of Better %. 2nd at this course in 2013 as well. Funny one this one but does provide salary relief on DK.

Marc Leishman ($7,800 DK $14,980 DS) - So yes, he missed the cut at the British Open, but he did bounce back with an outright 3rd at the St Jude. Currently 12th in the FedEx race, he’s guaranteed to make to the TOUR Championship in two weeks time. On record saying "I can definitely play with more freedom now and hopefully that should yield some good finishes; maybe even a win."18th in the field for Strokes Gained on Approach, 5th in the field for proximity from 175+ yards. My sneaky one for a high finish this week.

Aaron Wise ($6,900 DK $12,470 DS) - I would describe Wise as a volatile fantasy scorer. Makes a lot of Birdies (6th in the field for Birdies or Better %) but racks up the bogey’s big time (99th in the field for bogey avoidance). Currently 120th in the standings, so Wise is going to go all out for a high finish and advance in that top 70. Since the Masters he has only missed two cuts and made cuts for Top 40 finishes at the US Open and British Open on the resume.

Cameron Tringale ($6,600 DK $12,170 DS) - Doing very well in the events outside of the Majors and finds himself 101st in the FedEx standings. So, just like Aaron Wise, he’ll go in all guns blazing. Very good form including T5 at the Rocket Mortgage and T16 in the John Deere. 30th in the field for Strokes Gained on Approach 21st for Bogey Avoidance and 28th for Birdies or Better.

Dustin Johnson ($10,700 DK $20,390 DS) - DJ hasn’t cracked the top 20 in his past five events and a missed cut at the Rocket Mortgage means that DJ is out of form for his salary. One stat that has slipped is his proximity - only ranked 53rd in the field in this stat. Also 114th for Driving accuracy. If he turns his form around, then he is a big chance, but I’m not confident, so he’s a fade for me.