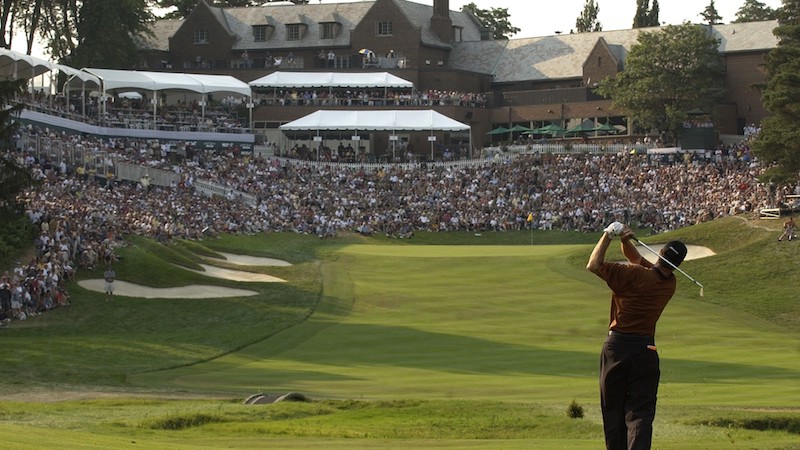 The Hamilton Golf & Country Club, a par 70 playing at 6966 yards, is this week's host of the RBC Canadian Open. The event was usually held in July but has been moved to June to accommodate this year’s revamped PGA tour schedule. We are at the penultimate event before the US Open at Pebble Beach, so whilst we have some top guns here, the quality of the field really drops off after 10 or so golfers.

The thick stuff at the @RBCCanadianOpen is no joke. pic.twitter.com/FPIppjpu4C

Hamilton golf club is a short undulating course that will require golfers accuracy off the tee and fire into smallish bentgrass greens. On average, the fairways are only 30 yards wide and they are surrounded by trees (although they have removed hundreds and hundreds of them over the years) and about half of the holes feature dog legs. What caught my eye is the rough at Hamilton this year - looks like what is to come next week!

Being on Canadian soil, there will be 20 golfers from Canada in the field, many of those I am unfamiliar with. Only Adam Hadwin and Corey Conners are in the top 100 in the world.

We do have Rory McIlroy, Dustin Johnson and Brooks Koepka here but I believe they might pull out if they do not have a great start here in Canada. Also keep an eye out for possible field changes, as some golfers who open qualified for the U.S. Open on Monday might end up withdrawing before roster lock.

Cut Rule: Top 70 and ties move on after the first two rounds. The MDF rule is in effect if more than 78 golfers make the initial cut.

According to rotogrinders.com the weeks key statistics are the following:

Let’s have a look at this week's picks for the Canadian Open!

Justin Thomas ($10,000 DK / $19,730 DS) - Certainly was rusty after a wrist injury layoff, Thomas is a late entry into the field after the miss cut at the Memorial. Was a popular pick last week and many got burned, so we should get a lower ownership outside of the big three. 4th in the field for Strokes Gained on approach and number 1 in the field for Birdie or Better Percentage.

Matt Kuchar ($10,500 DK / $18,710 DS) - Another golfer who burnt so many last week is ready for a bounce back. Enjoyed watching his polite conversations with rules officials last week after his ball caused a “second fairway divot within a divot”. 6th in the field for driving accuracy, 6th in the field for Strokes gained on approach and 2nd in the field for bogey avoidance. Don’t let the recency bias hurt you here.

Webb Simpson ($9,700 DK / $18,610 DS) - Simpson’s game is a great course fit this week. You need to be accurate of the tee, and whilst Simpson is short of the tee, it does not matter here. 12th in the field for driving accuracy and 4th in bogey avoidance. Plus we don’t have to worry about his motivation before Pebble Beach next week.

Corey Conners ($7,500 DK / $15,190 DS) - Currently sixth on the PGA tour in greens in regulation, first in proximity to the hole and 16th in strokes gained: tee-to-green. Conners also won the Valspar earlier this year and would dearly love to take out his national title. The only knock is that he has only made 9 of 18 cuts this season.

Mackenzie Hughes ($7,500 DK / $14,370 DS) - Another Canadian native, Hughes came 8th at the Charles Schwab Challenge two weeks ago. I am going on the course knowledge narrative here as he plays this course a tonne considering he is from Ontario. 14th in the field for overall proximity is great for a course like here in Hamilton.

Brian Gay ($7,200 DK / $13,980 DS) - Unfortunately the bottom half of this week's field is very hard to get a read on with a lot of unfamiliar golfers at the event. But I do like Gay at this price point. Gay is coming off a missed cut at the Memorial, he has however only missed three all year in 19 events. 4th in this field in fairways gained which has also helped him to a 20th rank in Bogeys Avoided in that time.