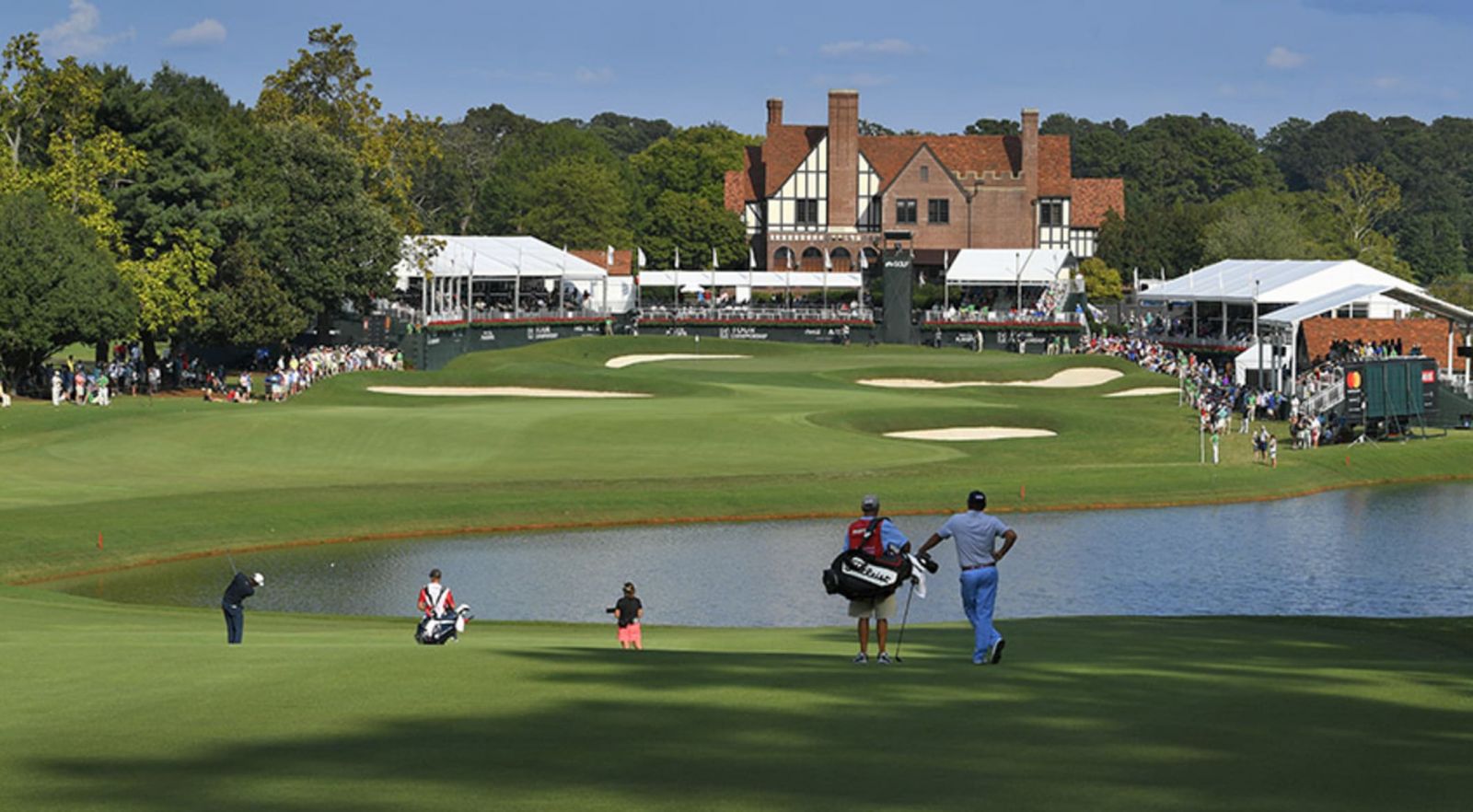 The top 30 golfers in the FedEx standings have reached the final stage of the PGA Tour playoffs and will now compete for the FedEx Cup. A brand new scoring format has been implemented by the PGA Tour as an idea to avoid the different winners of the Tour Championship and the overall FedEx Cup winner. Based on the FedEx standings, golfers will have a starting score based on their current standings. Justin Thomas who won last week at Medinah is currently the ‘leader’ at 10 under par. Thanks to pgatour.com here are the current standings for the tournament. 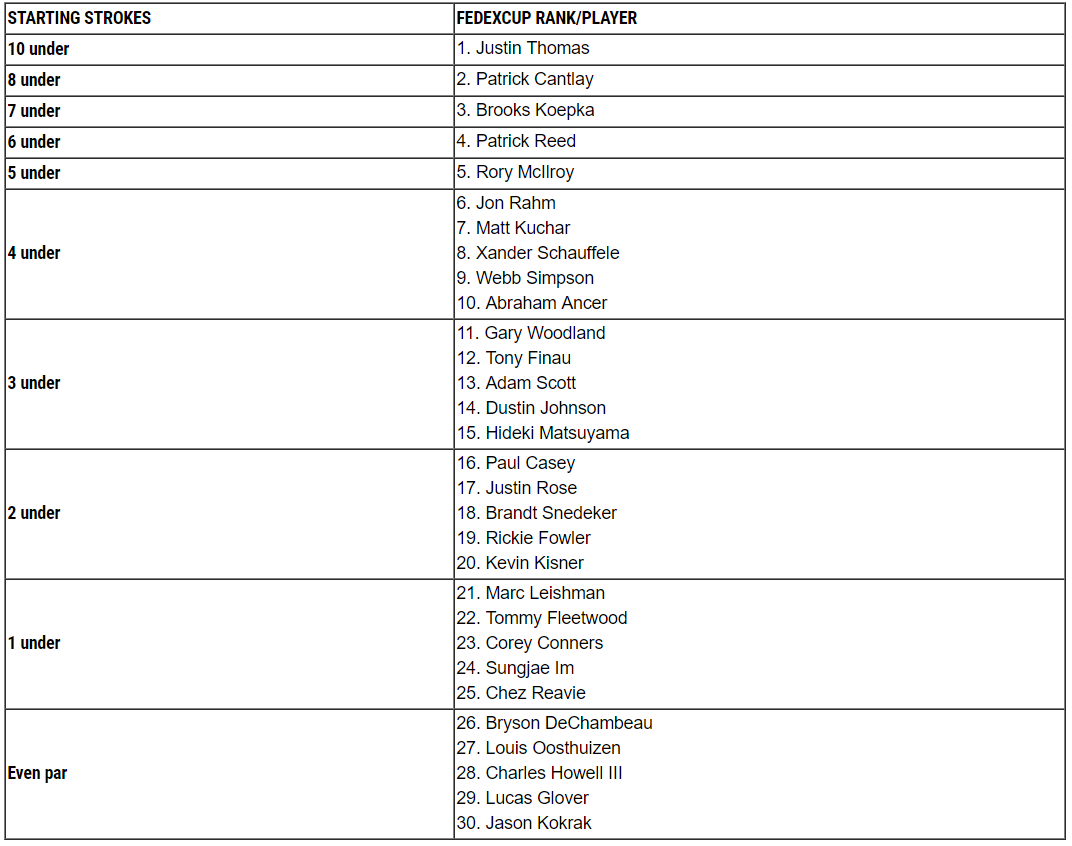 Having this new starting score has impacted betting and DFS. The scoring system for the sites have not changed, but player salaries have been adjusted to reflect their starting score. I will write about strategy in a moment.

East Lake Golf Club is just outside Atlanta, Georgia, and has been host of the Tour Championship since 1998 (Cypress Creek Course has hosted the event in 1999, 2001 and 2003). It's a Par 70, 7,346 yard test of ‘2nd stroke’ golf - There are only two par 5’s and numerous long par 4’s. Water is in play on six of the holes with fast Bermuda Greens. This course is a true test of all of your skills in golf. The course typically produces a deserving winner and one that doesn’t have a weakness in his game.

According to rotogrinders.com - the key statistics for East Lake are the following:

3) Strokes Gained Off the Tee

5) Strokes Gained Around the Green

Now, let’s talk overall strategy. Thanks to Clinton at Draftkings for tweeting the following guide to current scores based on leaderboard position. 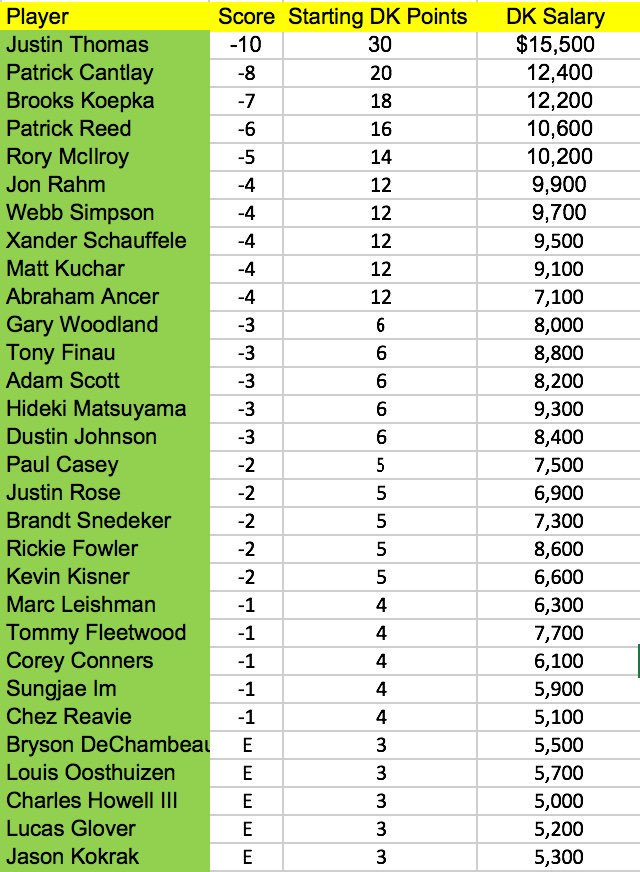 As you can see, Justin Thomas starts the tournament in first position with 30 fantasy points, while golfers at Even par have three points. Whilst from a punting point of view the chances of winning the tournament from Even par are very rough, the difference between the 10th and 30th ranked golfers when it comes to ‘fantasy’ finishing position is minimal. You still want to target the golfers that fit the course, regardless of where they start the tournament with their strokes.

Typically in 4-day classic format golf contests, the highest placing golfers have more fantasy points than the guys below them. Let’s consider this example where Bryson DeChambeau starts at Even Par and shoots -5 versus Patrick Reed who starts at -6 and shoots -1. With all things being equal besides the four extra birdies versus four extra pars; DeChambeau who starts at Even will earn 10 extra fantasy points and earn 1-3 less position points. So, despite finishing a few position places at two shots worse in adjusted scoring, he’ll still be a much better fantasy play with 7-9 extra fantasy points.

Whilst you could jam in the top four golfers in your lineup, it's probably not an optimal play. I will, however, at least consider having anyone in the top five to start with and build from there.

For those who want to see what happened between 2016-2018 in this modified starting score format, this gives food for thought ‘if’ this format was applied here.

Again, in no cut low field events, leave salary on the table to avoid having your lineup duplicated.

Let’s see who I am keen on at the Tour Championship!

Brooks Koepka ($12,200 DK / $24,440 DS) - The number one ranked golfer in the world starts his tournament at 7 under. It has been a brilliant season for Brooks and he would want to bookend this with a $15 million pay cheque and being named the overall champion. Koepka is starting just three back of Justin Thomas, and Brooks could easily make that up in just five or six holes. He could destroy this course and the field if he is on, however he's currently ranked just outside the top 10 in the field for key statistics, so be wary.

Rory McIlroy ($10,600 DK / $22,220 DS) - I would rather Rory chasing than Rory leading early here at East Lake. He was in the final pairing at the Tour Championship last year with Tiger Woods and ended up in 7th with a final round 74. Previous to that he won here in 2016 in a playoff at 12 under. Starts this week at 5 under and has the game here to compete for the title. 1st in the field for SG:Off the Tee, 2nd in the field for Birdies or Better %

Webb Simpson ($9,700 DK / $18,400 DS) - If you want to roster an elite ball striking player, then Simpson fits the mould. Whilst Adam Scott is a cheaper and likely more popular play, Simpson was 4th in this event last year and is currently ranked 2nd in Bogey avoidance in the field. Like his starting position at 4 under - I will look to him to chip away at the leaders and hopefully finish inside the top five.

Justin Rose ($6,900 DK / $14,800 DS) - Whilst on paper he didn’t have a great BMW tournament, he did lose a fair few strokes on only a couple of holes. Rose has been making top 10’s all year, and what is so attractive here is his salary. He'll be a popular play (over 40% on the sites) but he will provide great salary relief at a course he has fantastic history on (4th and 10th in past two years). 1st in the field for Strokes Gained Putting (even when he lost 5 strokes putting last week).

Jason Kokrak ($5,300 DK / $9,500 DS) - Best value play in the field. Kokrak’s consistency all year has been a feature of his season. Hardly missed cuts and has two top 20’s in his last two starts and a sixth place at the Wyndham. Unfortunately, he's too far back for the title, but if Kokrak can make a few birdies and stay patient, he will definitely climb the leaderboard and score a few extra tournament position points. 4th in the field for SG: Approach and 8th SG: Off the tee.