How to play LoL DFS on Draftstars 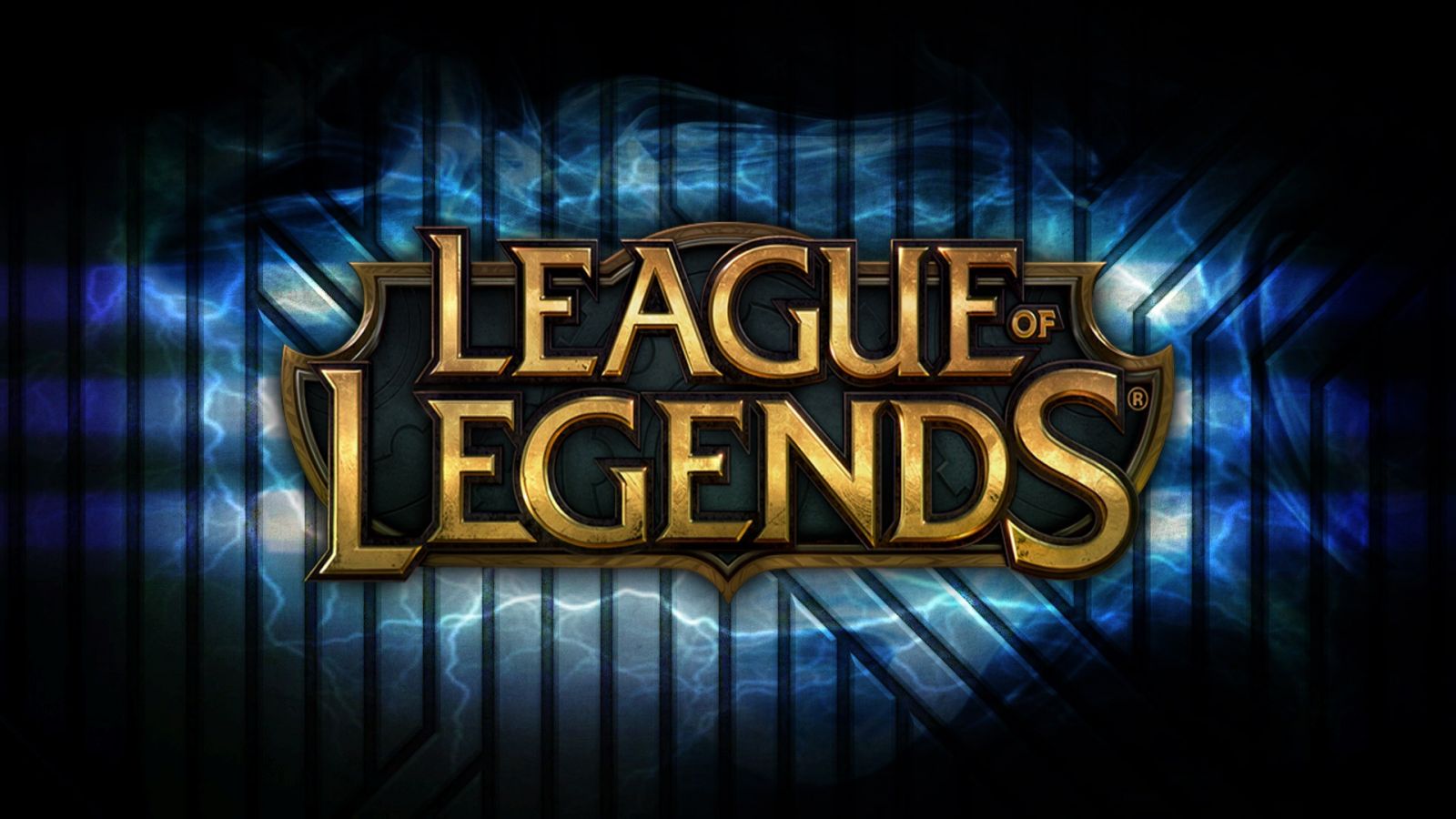 Daily Fantasy Sports in Australia has ground to a halt with no AFL, NRL, NBA nor PGA due to COVID-19. However one Sport has become a popular DFS game on DraftKings and now is available on Draftstars!

League of Legends has become a world wide daily fantasy game and with the introduction on the Draftstars platform, all Australian players can now play for prize pools.

So what is League of Legends? This article is here for you to learn the key features of the game and helpful tips so you can get into the action.

Background of the Game

League of Legends (otherwise known as LoL) is called a Multiplayer Online Battle Arena (MOBA). This is an action strategy game where two teams of five players fight in order to destroy the base (known as a Nexus) of an opposing team with the assistance of spawned game-controlled units that march along one or more set lane paths (these are referred as Minions).

Each player picks a character to play as, each with a unique set of strengths and abilities to use throughout the match. The characters are referred to as Champions. Players control Champions that have a set of abilities and advantages that can be improved over the course of the game and contribute to the objective of the game. Before a match gets underway, each team live drafts their team with the ability to “ban” champions from a team to draft.

There are various types of damage dealers, protectors and defenders, each of them crucial in defining the strategy of the game. Some champions work very well with each other or they work very well against others. Therefore, when picking champions, players must always consider who to pair them with. A bad pick can make gameplay for a team, which is why picking the right champion for the right role is critical.

In LoL, two teams of five players each are pitted against each other on a map that is even on both sides. The map holds two bases, and each team starts from their respective base. The objective of both teams is to reach the opposing team’s base and destroy their main building, known as the “Nexus.” They do this by earning Experience and Gold in various ways to upgrade their Champions, and eventually outwit and outplay their opponents and destroy their base, thus winning the match.

The map contains three lanes, Top, Middle and Bottom (Bot Lane). Within the middle of the lanes is what is referred to as the ‘Jungle’. Within the Jungle are various beasts such as Dragons and Barons of various toughness, each of which give certain advantages to players that kill them. In key areas of the map there are turrets placed to provide a safe zone from the opposing team and limit their advances. The map is divided in the middle by a river. The river provides a neutral territory that gives quick access from one lane to another. 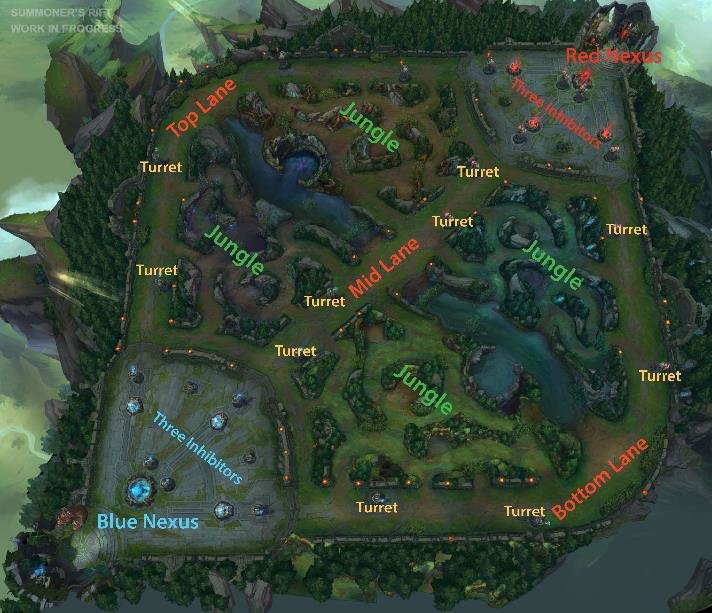 Players accumulate fantasy points by earning kills, assists, or creep kills (killing the opposition Minions). In each player base there is a shop where players can use these points to buy items to upgrade their champions. Both bases also contain their Nexus that is protected by two turrets and three inhibitors. These inhibitors must be destroyed before the Nexus can be destroyed. Only one inhibitor needs to be destroyed for the Nexus towers and Nexus to be open to the enemy team. Each inhibitor is protected by a turret.

The Roles of the Game

TOP - The top-laner is typically a balanced offensive/defensive role who plays in the Top Lane against the other top-laner. Think of him like a “On the Wing” in the AFL. They are usually matched against the opposing team’s TOP as they are left to battle one on one. They tend not to get in the “in and under” battles in the early skirmishes. However the top-laner is called upon late in the game to take out the opposing team’s strongest player as well as lead the charge in destroying the Nexus and winning the match.

JNG - The Jungler is like the Dummy Half in Rugby League. He fills up the stat sheet (well it's technically Gold) and he tries to do it all to help his teammates gain the advantage while denying the opposition as much as he can. He is typically played by someone who is pretty sharp at striking at the right time on opponents and creeping around by farming for experience and gold. They are sneaky players usually hiding in good spots in the Jungle and achieving Dragon/Baron takedowns and unsuspecting attacks. Some Junglers take a more kill friendly approach than others and like TOP do join up for big team battles later in the game.

MID - The mid-laner is typically a highly offensive and quick darting champion who is extraordinary at getting to/away from places quickly and not afraid of doing some damage. Reminds me of the old school “Rover” racking up the tackles and handballs in the AFL. The Mid-Laner is respected and feared in battles for their quick and powerful damage-output. This is the position where you will most likely want to spend up on your fantasy cap as this is a role that can produce a double digit stat line for kills. On Draftstars, your player is awarded bonus points on each kill over ten, making a pick with potential double digit kills a valuable option to roster.

ADC - The ADC (Attack-Damage-Carry) is the superstar of the team. He has the licence to go nuts in battles yet is most vulnerable to being killed as well. You can tell how a team is going by how many kills to deaths from your ADC. More akin to your high possession AFL players these players are “most likely” the highest salary players in fantasy.  The ADC mainly roams in the bottom lane with the SUP but as the objectives are ticked-off and the game goes along you will find your ADC stalking battle situations. What he does in team-fights will dictate whether or not his team will win.

SUP - The Support typically plays as defensive and utility based champions that have no semblance of offensive-power at all. Like your standard Back Pocket type in the AFL not looking for a kick but just doing his role. Their role exists to help the ADC get powerful, and create opportunities and plays for him to get ahead of the opposition. They set up opportunities for offensive plays and help their teammates out whenever they get a good opportunity. They are the least fantasy scoring players and you will find each player cheaper than other players. SUP’s don’t really kill but do rack up assists.

There is also a TEAM position and I generally go for the cheapest team who I think will win. The TEAM position accumulates points for First Blood, Turrets, Dragons, Barons and of course wins. A game bonus is also awarded if a team wins without extra matches required.

For me, the TEAM, SUP, TOP, JNG are the value spots to help build around those core plays. Ranking the positions for fantasy I have them ADC, MID, TOP, JNG, SUP, TEAM

Those who are familiar with DraftKings scoring will relate how Draftstars scoring works.

Lineups will consist of 7 spots with a maximum of 4 players from anyone LoL team in a matchup. Teams do count towards the 4-player maximum. Lineups must span at least 2 different LoL games. The 7 roster positions are:

FLEX (Can be any player or TEAM from the remaining pool)

You are going to read and hear about this alot in daily preview but the first very important thing when building League of Legends lineups is that stacking is KING. It is all dependent on the slate of course but generally try to stack two to three teams in a popular 4-3 structure along with 4-2-1 or 3-3-1 on Draftstars. Players on winning teams are also key as simple as it may sound. Game stacking does not apply to LoL, it does not work. Teams that win score very well and teams that lose hardly score at all. Similar to DFS Tennis where you want to be picking winners.

In each preview on DFR we start by breaking down the odds for each match and if available the Starting Lineups. Do not start making teams until you know who is actually playing and which teams the “Books” have favourite for each match. Depending on which league around the world you are playing, try and endeavour to see who is playing. Unlike DraftKings once the slate locks, that is it, there is no player swap. Player Swap will be available on Draftstars. Note the actual teams can be subbed in for starters after the 1st game of the contest. Swaps can occur on “some” occasions depending on the game script (like a bad loss or massive win) and the overall season standings. It can be “tilting” for a good player being swapped out for another player after having a good 1st or 2nd game. But hey we all know that's DFS for you!

Because the scoring system for players is based off of Kills and Assists, you want to look at an individual player’s KDA (Avg. Kills-Deaths-Assists) when considering them for your lineup. This is pretty straightforward, and it’s a good way to familiarise yourself with which members run offense, and which members run support and/or defense. Target players that have a high KDA with favorable match-ups for lineups in both cash games and tournaments.

Other statistics and data that you would need to consider include: 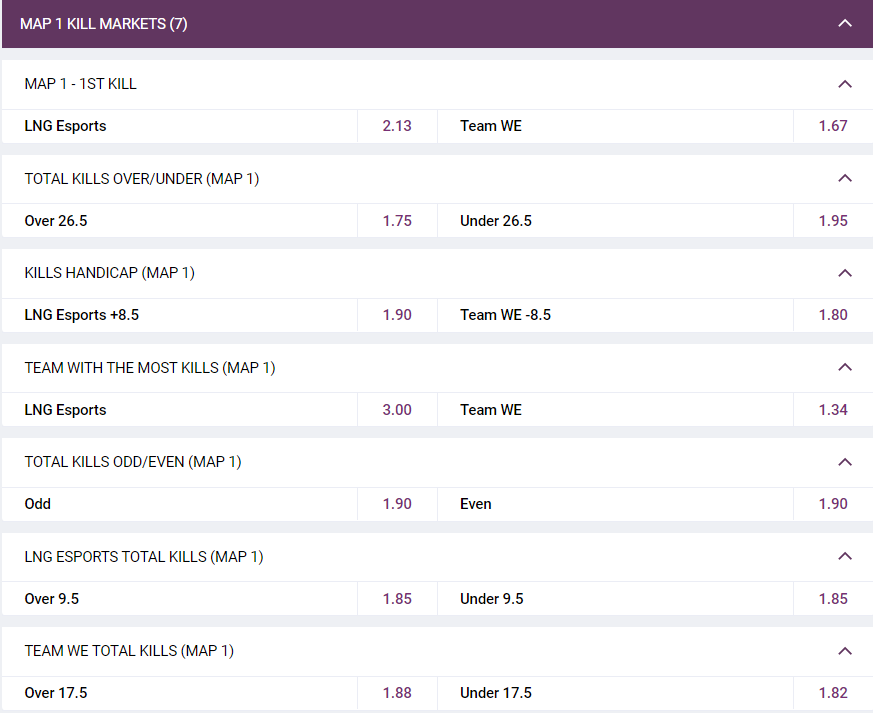 Last piece of advice is to watch the games to get an understanding on how a team plays and how individuals play as well. It is all part of the fantasy sweat to watch your players perform and score points! Accessing Live Streams are easy via YouTube or the Twitch platforms. 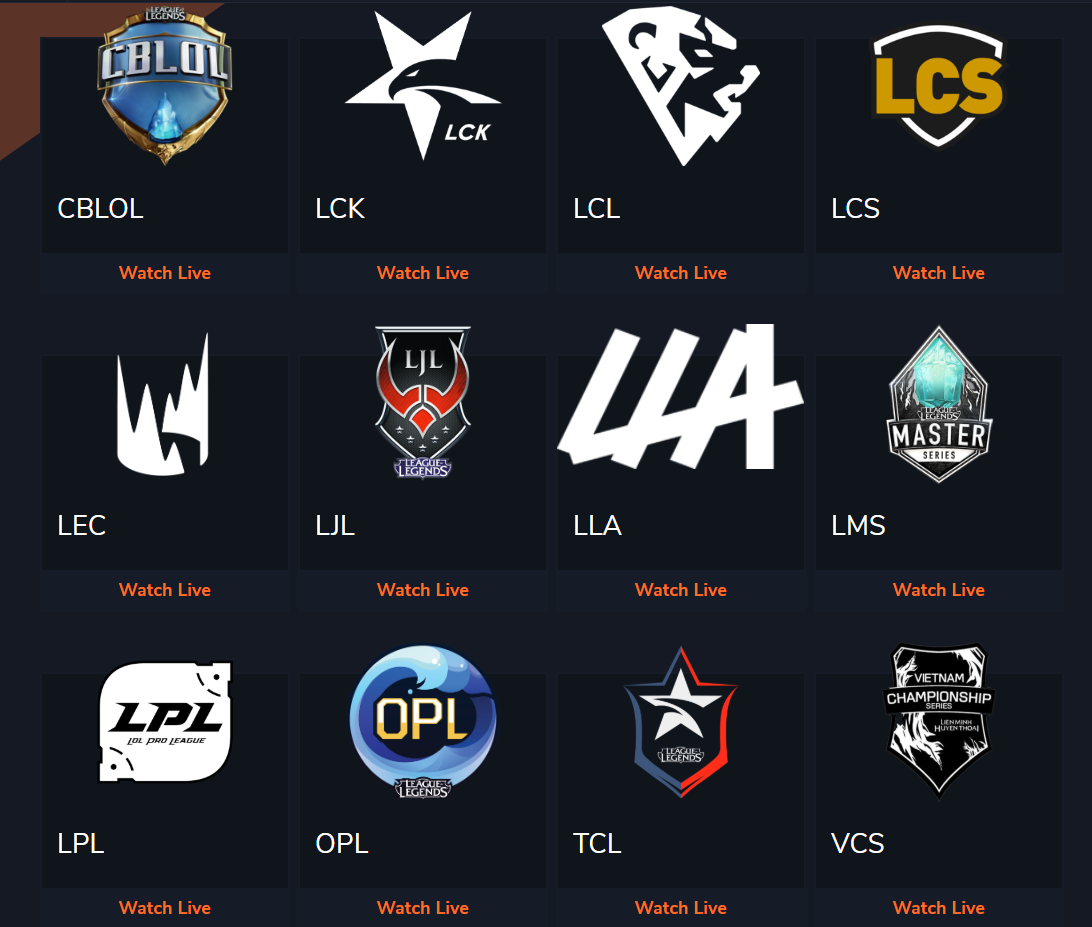 Fantasyesports.gg houses all leagues around the world on a handy Watch Live page. Best place to start to watch some LoL action!

Finally our friends at rotogrinders.com put out a great intervirew featuring host Stevietpfl and guest John George (@TheEsportsplug) where they talk LoL general strategy and gameplay. You can watch to this interview by watching the YouTube Video below.