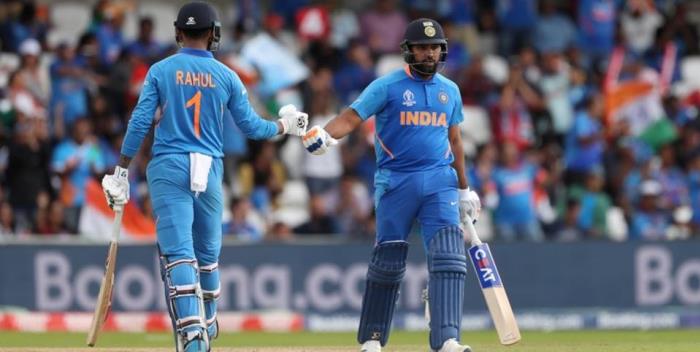 The 2019 ICC Cricket World Cup is now at the pointy end, with Tuesday seeing the first Semi-Final being played between India and New Zealand at Old Trafford.

India finished the round robin stage with 7 wins, 1 loss and 1 match washed out (against New Zealand) to finish at the top of the table. India had a 6 wicket victory over South Africa to open their campaign, followed by a 36 run over Australia, an 89 run victory over Pakistan, a tight 11 run victory over the winless Afghanistan, and a big 125 run victory over the West Indies. India then had a 31 run loss against England before beating Bangladesh by 28 runs and finally dominating Sri Lanka by 7 wickets.

New Zealand finished in 4th place, pipping Pakistan on percentages only, as both had the same number of points on the table. They won their opening 3 games against Sri Lanka by 10 wickets, Bangladesh by 2 wickets and Afghanistan by 7 wickets, before their highly anticipated match with India was washed out. New Zealand then beat South Africa by 4 wickets and then had a very tight 5 run victory over West Indies, before losing their last 3 games heavily against Pakistan by 6 wickets, Australia by 86 runs and then England by 119 runs.

MoneyBall has the biggest contest for this game, where $15,000 will be on the line in their major competition. DraftStars aren’t far behind though putting an impressive $10,000 on the line for this semi-final. Both contests have a buy-in of $15 each.

Daily Fantasy Rankings will have an exclusive cheat sheet available once again. Simply click here to access it if you want to improve, enhance, tweak or even select your squads for this big game.

At DraftStars he has an average fantasy score of 128.1, but he is averaging 166.3 over his last 3 games. While at MoneyBall he has a magnificent average of 51.3 and is averaging 68.8 over his last 3. As far as form goes, he is near impossible to ignore, especially against a depleted New Zealand bowling attack that has lost 3 straight games.

Lokesh Rahul – IND ($12,150 DraftStars) ($5,500 MoneyBall)
Rahul has been scoring steadily for much of the World Cup, but his last two games he has really lifted, producing scores of 77 and then 111 in his two best performances so far.

His great form, paired with his low price, especially at MoneyBall, makes him a brilliant option to select in your fantasy cricket teams who won’t break the bank either.

Ross Taylor – NZL ($10,160 DraftStars) ($5,700 MoneyBall)
One of New Zealand’s top line batsmen who has really struggled to maintain any good form in this tournament. He scored 82 against Bangladesh and 69 against West Indies, but has really struggled against the top sides. His strike is a bit slow at 73.26. He is very expensive at DraftStars, and his form suggests that he is quite overpriced.