In a Daily Fantasy Rankings Exclusive Interview, I was able to catch up with Australia’s number 1 ranked DFS player ‘Knova’. Knova has taken over the number 1 ranking on the Australian Fantasy sites on DFR after having an amazing run over the 2019/2020 Australian summer. Big wins on Draftstars and Moneyball in the NBA and more importantly the BBL have propelled Knova to the top of the tree. Whilst the attention has shone on fellow Australian DFS player in ‘jayk123’ who won the DraftKings Milly Maker in the NFL, Knova has clearly performed on the Australian sites and deserves the number 1 ranking.

So who is Knova? I was lucky enough to grab some time out of busy his schedule to find out about our new number 1 player! 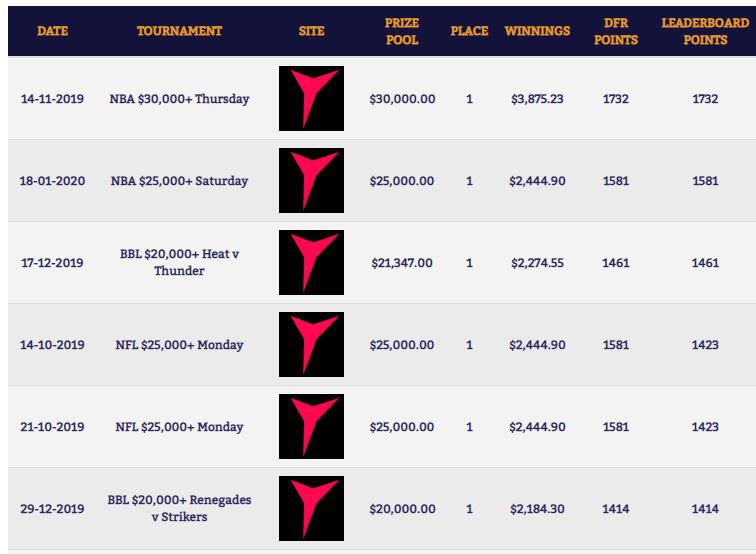 Let’s start with a bit of a background on yourself. Where you are located? Favourite teams/sports to follow? Outside of DFS any passions?

Sure no problem. I'm based in Sydney currently. It feels like most people prevalent in the community aren't from NSW, but the story of how I fell in to DFS is probably pretty similar. Get started on a sport you love (for me NRL), and it snowballs from there.

For the Australian sports, the teams I actively follow are the St George Dragons (NRL), Sydney Sixers (BBL), The Swans, and most of our national sporting teams. I'm still more of a casual fan for the American sports and haven't adopted a team for NFL or NBA yet.

Outside of fantasy sports and DFS, I play touch football, which is a niche amateur sport born out of the rugby codes. I also live close to the beach, so love popping out for a cheeky surf whenever I can find the time.

How did Daily Fantasy Sports come along?

I first heard about DFS through a site some mates and I use for a season long NRL comp. They had some promo involving Moneyball and a free entry in to some NRL contests one week so I jumped in there. Shortly after Draftstars arrived and it went from there.

Was DFS a casual hobby to start with or was this a serious "pastime" to get involved in?

Definitely a casual hobby. I was just playing the NRL contests but found that the bankroll grew quite quickly at that stage. Everyone in my season long NRL league was quite passionate about it, so we followed all things NRL quite closely. With NRL DFS being relatively new, it made the transition from season long thinking to daily thinking pretty painless.

Tell us about your preparation for a slate, is it Data or watching game after game? Or something different?

My prep for different slates honestly depends on the sport, but in general it's a mixture of both data and watching the tape. The underlying stats for a sport are obviously important, but there's some things that are much easier to pick up from watching the games. Generally, I like to go over the underlying stats to see the type of production I can expect from players and teams, and watch the games to form opinions on players, teams and coaches. I also like to sacrifice a goat from time to time to run good on NRL post game adjustments.

This season you have been crushing in the BBL - tell us about how you go about your teams for BBL (and handling the after toss “panic”)?

Yeah so the first thing I like to do before lock is to go over what's happened with the two teams recent games, just to freshen up on the roles I can expect guys to have in the upcoming game. I view BBL as a fantasy sport where it's more important to "engineer" your teams, similar to the NFL. For example, if I'm building a BBL team that uses both openers from a side, I definitely wouldn't use a bowler from the other team who bowls 2+ overs in the powerplay or another bat from the same team since those players would be negatively correlated with the openers in games that both openers do well. Just making sure I build teams where all the players can perform really well in the same game.

Once we get final teams and the toss I like to give myself a moment to think about whether the final teams changed any of the roles I expected for players, and also which game scripts and players I want to target in the upcoming contest. From there it's the half hour of power with building teams and getting them in on time.

The after toss "panic" isn't as bad this year because we are getting the toss and final team news earlier. It's still a pretty hectic half an hour, but I just try not to umm and ah over close decisions too much. If I was only building 5 or so teams I probably would spend the whole half an hour debating those close decisions that don't mean that much overall, only to get it wrong anyway.

If you had one piece of advice for DFS players, what would you say?

I find this question quite difficult because not all DFS players are the same. The advice I'd give to 1 player may be completely different from another.

The general piece of advice I'd give to most players is to back yourself a bit longer. So often I see people play someone in DFS and then hear some variant of "never again", "blacklisted" or "played him last slate, scores 5, this slate 55". In most situations, the underlying reasons why you played that person to begin with haven't changed (good value, too cheap for role, upside etc..). Unless something else has materially changed (price rise, role change, extreme matchup difference, extreme slate difference), if they were a good play last slate and put up a dud, they are probably still a good play this slate.

Some players in the community sees you as one of the unluckiest players after the 4th position in the BBL Live Final in 2019, does this bother you? Or just water off a duck's back?

Haha yeah I thought this might come up. It did annoy me a little at the time, mostly because none of us knew that the live leaderboard had actually frozen with 2 balls still to go, so they let me go around high 5'ing blokes for a good 5 minutes after the game before the tech guy randomly walked up and deadpanned me to 4th in a tourney where 4th receives the same prize as 45th (and twice as much as the guy who came last). I was never a chance at taking Richozz's 1st place finish though so I'd put it behind me by the time I finished the next beer. At least I would have if a certain agitator, for privacy's sake let's call them Parks O… No, that's too obvious, let's say P 12, didn't bring it up every chance he gets.

What would you like to see happen in 2020 in the DFS world here in Australia?

I'd like to see the sites continue to focus on growing DFS overall in Australia. It has the potential to be much larger than it currently is.

On a more selfish note, I'd love for them to introduce an NRL live final alongside the AFL one. Particularly now that the second State of Origin game is on a stand alone weekend around 4 months in to the season. It's literally the perfect island game for a live final.

You can access Knova's achievements by checking out his profile here.

Well done Knova, throughly deserve your ranking! Hope you can stick around once the winter sports get underway later this year!