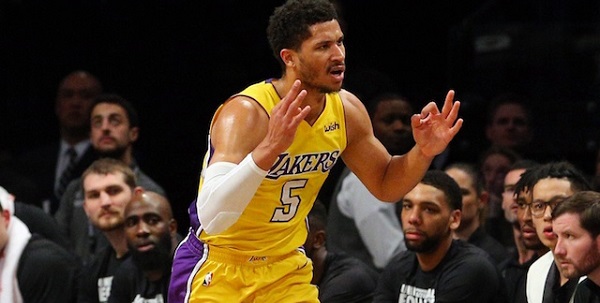 After such an entertaining NBA season we are now down to the final day of the regular season, with a huge 12-game slate taking place! With so many players to choose from, we’re here to help you with picking some of the lesser-known cheaper players to give your team the edge and a chance to take home some cash. Moneyball and Draftstars are again offering massive cash prizes for their major tournaments, so be sure not to miss out!

See our fantasy tips for Thursday, the 12th of April below.

PG – Josh Hart (LAL)
The Lakers are feeding big minutes into their younger players to end the 2017/18 season and Josh Hart is one of those guys. He’s been given the keys to the point guard position with Ball and Thomas out with injury, making Hart is a great cheap option for your fantasy team on Thursday.

SG – Allen Crabbe (BKN)
The Nets have had another disappointing season and are now giving extended minutes to their players of the future. Crabbe has been in terrific form lately, highlighted by his career night in his last outing where he dropped 41 points. He is a solid cheap option and could be a nice POD for your team.

SF - Jabari Parker (MIL)
A lot of people forgot about this man, but not for very much longer. Jabari Parker, who was the no.2 pick a few years back has been building really nicely since his return from injury. He’s starting to get big minutes and we think he’s going to end the regular season with a bang.

PF – Nikola Mirotic (NOP)
Nikola Mirotic may not be the best locker room guy… but he’s proving to be a great asset on the court. He’s been in great form since his move to the Pelicans and is still a great cheap option for your team at the power forward spot.

C – Jarrett Allen (BKN)
Our cheap pick at the centre spot for Thursday is Jarrett Allen from Brooklyn. The young and high-flying big man is going to be a key piece for the Nets moving forward and is a lock for big minutes in their last game of the 2017/18 season. Make sure you include him in your team.