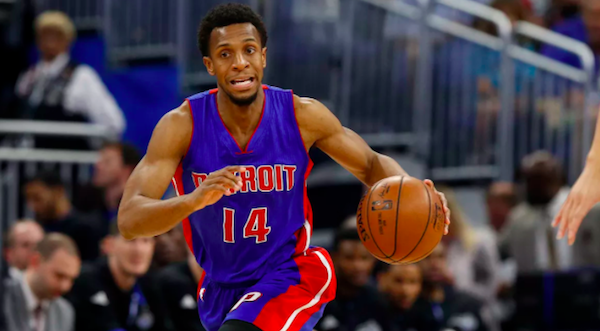 Once again, there’s another huge 10-game slate of NBA action on Thursday for us to look forward to. Naturally, having so many players to pick from makes it hard to find the right formula for your daily fantasy teams. That’s why we’re here! We’ve analysed the value picks for each position and have come up with some great cheap options to help fill out your fantasy squads. Moneyball and Draftstars are again offering massive cash prizes for their major tournaments, so be sure not to miss out!

If you’re looking for a cheap position at the Point Guard spot, then look no further than Ish Smith. Injuries have made the Pistons extremely thing at both guard positions, which has naturally given Smith greater opportunity and time on the court. He is guaranteed to play big minutes and is just $6,500 in Moneyball and $10,200 in Draftstars.

Tim Hardaway Jr has finally come back from injury and seems to be off his minute’s restriction. As we saw at the beginning of the season, when he’s fit he can be fantasy gold! He played 33 minutes and lit it up from the floor in the Knicks last outing. He is valued at $5,000 in Moneyball and $10,800 in Draftstars, which we feel are huge bargain prices.

Carroll has been in magnificent form lately, averaging a huge 35 fantasy points across his last 3 games. He is priced at just $4,600 in Moneyball and $10,050 in Draftstars and has huge scoring potential. The Nets are facing the Spurs on Thursday, which will mean he’ll be sure to play big minutes.

Like Carroll, Marvin Williams has been in blistering form lately. He is pretty much basement price at $3,600 in Moneyball and $7,400 in Draftstars, but is averaging a more than respectable 30 fantasy points across his last 3. Williams is a streaky shooter and is known to get hot in a hurry, which means he could be a great player of difference for your side.

Rounding out our fantasy team bargains at the Centre position is Willie Reed, from the Clippers. When given the opportunity, Reed has been a serviceable player for the Clippers this season. With DeAndre Jordan set to miss the game against the Nuggets on Thursday, Reed will get plenty of opportunity. He is extremely cheap at $3,700 in Moneyball and $6,950 in Draftstars and has the potential to post a decent score.